Islam, Sexual Violence, and the West 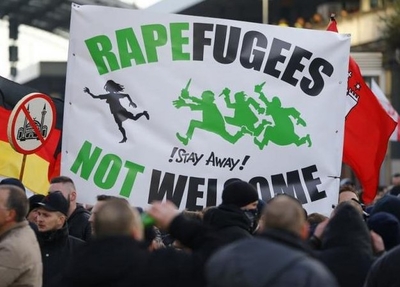 The mass rape of hundreds of German women mostly by Muslim migrants last New Year's was recently revealed to be far worse than originally acknowledged. Authorities now believe that more than 1,200 women were sexually assaulted – more than twice the original estimate of 500. While more than 2,000 men were allegedly involved, only 120 suspects — about half of them recently arrived migrants — have been identified.

One explanation for why it took half a year for the full extent of the crime to be revealed is the German police's effort to avoid a public backlash against refugees. But ultimately, Holger Munch, president of the German Federal Crime Police Office, acknowledged to the German newspaper Sueddeutsche Zeitung that there is "a connection between the [sexual assaults] and the rapid migration in 2015."

Denial is not a strategy. Western countries that cherish women's rights must wake up to the fact that many migrants could challenge those values. Most of the mass migration comes from violence-plagued, Muslim-majority countries in the Middle East and North Africa, where women are second-class citizens subject to honor killings and various legal restrictions, and where the local culture often condones rape, encourages wife-beating, and treats women as sexual objects (with 72 virgins promised to Muslim men who reach heaven).

Thus, just as the mass migration from the Middle East and North Africa raises the specter of regular Islamist terror on European soil, it also augurs the kind of sexual abuse that those regions have traditionally tolerated. German officials implicitly seemed to acknowledge as much with their laughably impotent campaign to re-educate migrants using signs that explain acceptable behavior towards women.

Non-Muslim ("infidel") women are especially vulnerable to sexual assault: Christian women are often abused and denigrated in Islamic societies, as extensively exposed by Raymond Ibrahim, author of Crucified Again. The Islamic State (ISIS) regards the Yazidi, another religious minority, as devil worshippers and reportedly enslaved up to 5,000 Yazidi women, subjecting them to rape, sexual slavery, forced prostitution and other acts of extreme brutality, like burning alive a 20-year-old girl "because she refused to perform an extreme sex act."

Saudi Arabia, arguably the leader of the Sunni Muslim world, has a legal system based on strict sharia law, which prohibits women from dressing as they wish or even driving a car. Saudi rulings are notoriously abysmal when it comes to rape. Last year, a Saudi woman was sentenced to 200 lashes after being gang raped by seven men. In 2013, a Saudi preacher who raped, tortured, and murdered his 5-year old daughter was punished with just eight years of prison, 800 lashes, and a $270,000 fine. With such legal norms, it's not surprising that when members of the country's ruling elite travel to the West, their behavior may not change accordingly (last October three women accused a Saudi prince of sexual assault in Beverly Hills). By ironic and tragic contrast, U.S. soldiers stationed in Muslim majority countries are trained to respect local norms to the point that marines stationed in Afghanistan were actually taught to look away if they find Afghanis raping children, a common local practice.

While sharia advocates often claim that the Islamic dress code protects women, the brutally unfair treatment of women by Islamists seems driven more by power-hungry male chauvinism and/or sexual insecurity than by any genuine concern for women's welfare, judging from the staggering hypocrisy of its proudest proponents. The 9/11 jihadists visited strip clubs, and paid for prostitutes in their motel rooms. Anwar Al-Awlaki, the American-born imam whose sermons continue to attract recruits to jihad, frequented prostitutes. Osama bin Laden had an extensive pornography collection, and is among the many examples of jihadis obsessed with porn and prostitution collected by Phyllis Chesler, a CUNY emerita professor of psychology and a fellow at the Middle East Forum.

Between 1997 and 2013, well before the recent mass migration to Europe began, an estimated 1,400 children had been sexually abused in Rotherham, England, predominantly by gangs of British-Pakistani men.

While that scandal involved mostly "white" victims, an Oxford-educated Pakistani-British woman revealed her own exploitation, noting that "sexual abuse has been systemically under-reported among Asian girls due to deeply entrenched cultural taboos – obscuring the reality that there is a similarly rampant problem of minority girls being abused by members of their own community."

A few weeks ago, Swedish police received 35 complaints from girls aged 12 to 17 who claimed that "foreign young men" sexually assaulted them at a popular music festival.

Soeren Kern, a distinguished senior fellow of the Gatestone Institute, compiled details of dozens of sexual assaults by migrants in Germany during the first two months of 2016, and noted the enabling reaction from "the upside-down worldview of German multiculturalism: Migrants who assault German women and children are simply rebelling against German power structures. Germans who dare to criticize such assaults are racists."

In contrast to the initial cover-up by German police of the mass rape by mostly Muslim migrants, France's top security official recently spoke with candid alarm about the threat that his country faces. Just two days before the truck-ramming, ISIS-inspired massacre in Nice, Patrick Calvar, chief of the Directorate General of Internal Security, warned members of the French parliamentary commission that France is on the verge of a "civil war" that could be sparked by the mass sexual assault of women by migrants.

There are remarkable exceptions within Islam itself, such as the Tuareg, an Islamic tribe in Africa, where women embrace sexual freedoms, dictate who gets what in divorce, and don't wear the veil because men "want to see their beautiful faces." But how long can the Tuareg's enlightened version of Islam survive in southwest Libya when ISIS is expanding there, or in Mali, Niger and northern Nigeria, where Boko Haram is on the march?

There are also brave Muslim reformers trying to improve the way Islam treats women. However, they mostly operate in the West, where they still face death threats; one example is Irshad Manji. Another, Fadela Amara, founded Ni Putes Ni Soumises, a group that defends Muslim French girls against the pressures they face to wear the hijab, drop out of school, and marry early without the right to choose their husband. Amara went on to serve in the government of Nicolas Sarkozy, but she, too, received death threats for her efforts to liberate Muslim women.

Muslim feminists outside of the West assume far greater risks. Pakistani social media celebrity Qandeel ‎Baloch, who openly expressed her feminist views online, was recently strangled to death by her brother in their family's home, in an "honor killing." Her "intolerable behavior" is what drove him to murder her, he said, because her risqué persona was bringing "dishonor" to the family. There are an estimated 1,000 honor killings per year in Pakistan.

Even in the West, few feminists dare to criticize Islam because doing so can invite threats and violence. Absurdly, those brave enough to do so also risk being prosecuted for "hate speech."

Western countries must support courageous Muslim reformers while protecting all women living in their territories from the sexual abuse often encouraged by Islamist culture – whether that abuse is perpetrated by recent immigrants or long-time residents. The survival of the West depends on it.

Goal of the Rapists

It's amazing how Germany and European countries suffering the rape epidemic failed to realize that the goal of the immigrant rapists is to impregnate those they rape so they could give birth to children of their own kind. As that happens, their population will increase and with time, they will take over those territories without struggle.

How dare the Govt cover up these crimes.

They let the rapefugees into the country and did not protect its citizens.

Shame on Merkel and anyone else complicit in these crimes.

Not Shame - Arrest and Punishment so they don't do it again.