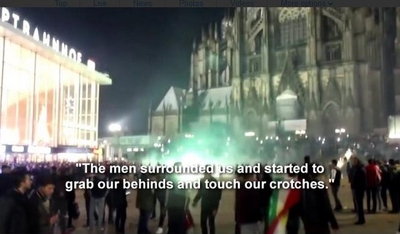 It was a different kind of terrorist attack: a carefully orchestrated, coordinated mass rape and sexual assault on hundreds of women across Cologne, Germany amongst the firework celebrations of New Year's Eve. Reports of the attacks describe women desperately fleeing as men pulled at them, groped between their legs, dragged them into alleyways, and witnesses who struggled to rescue them as men threw bottles and fireworks at the police.

Two weeks later, more than 500 women, along with other victims in Hamburg, Stuttgart, and Berlin, have filed complaints, and 22 suspects have been identified. Most of those suspects are asylum-seekers, new arrivals from war-torn Syria, Iraq and Afghanistan who, German officials now say, used the country's open-armed offer of sanctuary to the victims of terrorism as a gateway to wage even more terrorism in the West.

It worked. Across Europe, women have voiced a new fear of being on the streets at night and concern that the attacks in Germany will spread. In fact, they have already. Other such rapes were reported in Finland, Sweden and Austria over New Year's as well, though on a smaller scale.

While this kind of massive, pre-planned act of violence against hundreds of women represents a new tactic in Islamic terrorism, the truth is that it's been brewing, even happening, in random – but constant – attacks for years. For well over a decade, for instance, the Dutch have muttered about second-generation Moroccan youth groping Dutch women, calling them "sluts," and describing them openly as whores. Europe-wide, that view of Western women among immigrant Muslim communities has helped fuel a rash of sexual violence against them.

In 2003, for instance, 15 Moroccan-Dutch youth raped a 22-year-old Dutch woman on a commuter train. Ten years later, a 30-year-old Swedish woman was gang-raped at a refugee housing project.

In Oxford, England, that same year, a gang of seven men of Pakistani and Eritrean origin were convicted of sex trafficking and rape on a wide scale, with as many as 1,400 victims, some as young as 11 and 12 years old. One girl was reportedly forced to have a home-style abortion on a living room floor; she was 12.

Reported the Gatestone Institute at the time, "In graphic testimony, one of the victims told the court that Mohammed Karrar would charge men £500 ($750) to have sex with her. They would take her to homes in High Wycombe where she would be subjected to gang rapes, incidents that she described as 'torture sex.' The men would tie her up and gag her mouth with a ball to stop her cries from being heard. The men would play out abuse fantasies; sometimes she was left bleeding for days afterwards."

More recently, reports of rapes in asylum centers by fellow asylum seekers, who then force their victims into prostitution, have made headlines across Europe, particularly in Germany, even as the gang rapes on European streets continue.

These are not isolated incidents. Rather, they are increasingly a part of European life and culture, emblematic of the clash of sexual and social mores between Muslim immigrants and the European countries in which they now live. Western girls and women dress in ways immigrants from North Africa, the Middle East and much of Southeast Asia (often called the MENASA region) consider "revealing" and "provocative." Muslim girls are expected to remain "pure" until marriage, to cover themselves – if not in burqas and niqabs, then with long sleeves and long skirts or slacks and headscarves.

Against this standard, and aided by film, TV, and popular culture, Western women are seen by MENASA immigrant youth as promiscuous, loose, and willing – a perspective no one in their communities refutes. Add to this the hormones and sexual frustrations of young Muslim men forbidden to engage in sexual activity with Muslim girls, and – often with the loud encouragement of their peers – they sublimate their urges and sexual guilt into shaming these girls with taunts or, in too many cases, by molesting them.

But rape, as is widely known, is more than a sexual act: it is an act of violence and the abuse of power. That has translated in recent years also into the emergence of gangs of so-called "lover-boys," men – largely immigrants from Pakistan and Morocco – who seduce young girls and then force them into prostitution. As early as 2000, reports of these girls working in the windows of Amsterdam's Red Light district hinted at the scope of the problem. Even then, an administrator for the Dutch Salvation Army who worked with local prostitutes told the newspaper Volkskrant, "In the last few years we've seen more and more Dutch girls behind the windows. And Moroccan girls, whom you never saw here before."

Other girls are sent to Belgium by their "lover-boys," who "[a]re all immigrants from Moroccan or Surinamese origin, while their victims are Dutch native girls," Antwerp Police Chief Inspector Jan Piedfort told Belgium's De Morgen.

One such lover-boy described how it works to the Al-Amal Foundation, which supports families and women mostly from the Dutch-Moroccan community. "A Dutch girl, you give compliments, you flatter her, you pamper and indulge her with roses and before you know it she is lying on her back working for you. With a Muslim girl, you go to bed with her, rape her, photograph her and then you have her in your power. Then you can blackmail her: work or I'll show everyone the photo. And a Surinamese or Antillian girl? They're born whores."

All of these trends have paved the way for sexual violence as a natural weapon for jihad in the age of ISIS. Indeed, we've seen it used not just in the mass gang rapes in Europe in recent years, but in the sexual enslavement of Yazidi girls in Syria and Iraq. We've seen it further in ISIS propaganda that even encourages its male members to rape women to bring them "closer to Allah."

Yet European officials have done little to stop these widely reported atrocities, fearing charges of racism and "Islamophobia." Britain's former Labor MP Denis MacShane admitted to the BBC in 2014 that he failed to investigate oppression of Muslim women due to a mindset of, "not wanting to rock the multicultural community boat."

The implicit misogyny in this – that offending Muslim men is somehow worse than the rape and molestation of women, Muslim and not, is striking. If anything good can come of the New Year's attacks, it will not be through the advice of those who, like Cologne Mayor Henriette Reke, suggested women keep a distance from strange men, or who recommend women dress more modestly. Rather, it will be through those who recognize that terrorism takes many forms. This is one of them. It is time to start treating it that way.

This article has been amended since publication to clarify a statement.

well said Pia van der Molen....we must stick together ...i live in England

Europe should have seen this coming.lI

As Pia mentioned in her comment, this type of behavior by Mosllim youth and men is not new. It has been tolerated for years in countries such as the Netherlands, where I was born, but no longer reside. The political correctness has resulted in a boldness on the part of the Moslim immigrants, while the population is afraid to voice its fears. It is implied that European woman are to blame for not covering themselves up.

Europe has been foolish, allowing tens of thousands of so called refugees (mostly men!) to invade its peaceful countries. The future does not look good for Europe.

I agree with TwFS's comment that they will have another thing coming if they try this in the U.S. Many women here carry a (legal) concealed weapon in order to defend themselves against just such violence.

I can't figure what you mean by "hypocritical hysteria". Lots of us on the other side of the pond figure your political leaders messed up by brining in these migrants, and continue to mess up by not owning the mistake and dealing with the situation.

As for when they arrive here, I'm armed. I carry my permitted handgun everywhere I go. I don't want to use it, but I can if I must. I certainly will to protect my wife and daughter. Maybe you guys gave up your right to real self-defense too soon?

This has been swept under the carpet all over the liberal west for fear of undermining "multiculturism." Authorities who conceal such acts and danger hot spots leave citizens unaware and off guard. Such dereliction of duty (for ideological reasons) should expose them to class actions on a massive scale. That is the way to stiffen gutless politicians.

Islamic Mosques, schools and centers of learning should be required to openly teach tolerance and respect for other cultures. All hate speech and incitement to violence should attract prison terms at the very least. This we can do in the west at least ; combined with prudent immigration laws and checks to minimise extremists entering the country. Compassion is wonderful but it can not trump our duty of care to our citizens.

In the longer term these measures must be implemented in the Madrasas around the world where bearded old men twist young boys . This is nothing more than child abuse. Abhorrent! This is the most difficult task of all. "Moderate muslim majority" where are you?

Utterly disgusting! These are Muslims who live by the glorious Qur'an's teachings! Much thanks to previous president Bush Jr. and present president Obama for support of Islam's doctrine of subjugation! Muslim Bush Jr. and Obama will go down in history as the forefathers of the Islamic States of America! What a legacy!