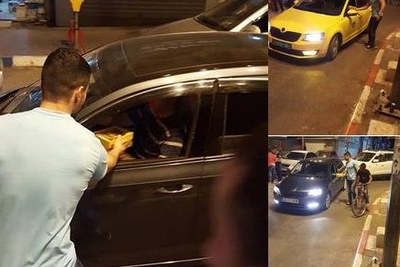 There was the requisite handing out of sweets to celebrate the attack among Palestinians and their supporters. The official Facebook page for the Fatah party, which is home to Palestinian Authority President Mahmoud Abbas, called the victims who were gunned down in the heart of Tel Aviv "settlers," the Elder of Ziyon blog noted.

People in Tel Aviv are settlers only in the eyes of those who believe Israel has no right to exist. The PA supposedly accepted Israel as part of the 1993 Oslo Accords, but Abbas repeatedly has refused to accept it as a Jewish state.

The International Union of Muslim Scholars, led by Muslim Brotherhood spiritual guide Yusuf al-Qaradawi, posted a brief video on its Twitter feed. With hashtags "al Quds" (Jerusalem), "Intifada," and "Ramadan," the video shows bullets placed over a map of "Palestine" which covers all of Israel. The call to prayer is heard as a gun is shown with dates. During the month of Ramadan, Muslims traditionally break the fast with a handful of dates before heading off to the evening prayer.

American Islamists consider Qaradawi a moderate and a respected scholar. 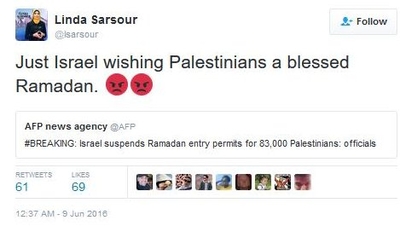 Those Islamist voices, including officials at the Council on American-Islamic Relations (CAIR), have been silent about the Tel Aviv attack. As we have noted, those groups manage to overcome their reticence in rare cases in which Israelis attack Palestinian civilians. In those cases, Israeli leaders across the political spectrum quickly condemn the violence.  Another prominent Islamist, Arab American Association of New York Executive Director Linda Sarsour, expressed outrage at a report that Israel was suspending entry permits for Palestinians, casting the move as a slap during Ramadan, rather than as a security step in the wake of the attacks.

Some of Israel's enemies were more direct.

Hizballah, Iran's Lebanese-based terror proxy, issued a statement saying it "hails the heroic operation carried out by two Palestinian Mujahidin in the heart of Tel Aviv" as a sign Palestinians remain committed to violence "to completely liberate the occupied territories from the Zionist Occupation."

If all this is meant to frighten Israelis and send them cowering into their homes, it didn't work. The scene of the terrorist attack, the Sarona Market, was open for business Thursday, again crowded with diners.

"Terrorist groups seeks (sic) to destroy the normal life of free society; we defy them by embracing life," wrote UN Watch Executive Director Hillel Neuer, who was among the diners Thursday. He said he found inspiration in seeing Israelis defiantly paying respects to the victims and singing "songs of peace. So long as Palestinians teach their children to murder Jews, and so long as their hatred is legitimized by UN bodies like UNRWA and UNHRC, terrorism will never stop."

The report is totally correct as many reports on this topic are.

Surely, all can see that there is no point in discussing a "two state solution" which should be relabelled "two state disaster". as the Palestininas keep up their demand for the whole of Israel. If they were in the slighest bit intrerested, which they aren't, they couldn't care less about Israel being a Jewish state, which it will always be. They would cease and desist for calling for the death to all Israelis and other blood curdiling threats which doesn't make for good neibhours now or in the future.

The world's community is siding with the "Palestinians" which makes Israel's intention of destroying these monsters almost impossible. Israel needs all the friends she can get-but at what expense? A small country with 8 million peop[le needs friends. Again a what expense?

Israel as small as it is, could totally obliterate it's enemies. That's the tragedy. She is being dictated to by the world at large and sadly the Western countries are in the forefront of this problem.

How long can Israel sustain this world wide pressure for a "two state disaster".?

Israel at the right time must take care of it's own destiny as she always does by whatever means at her disposal.