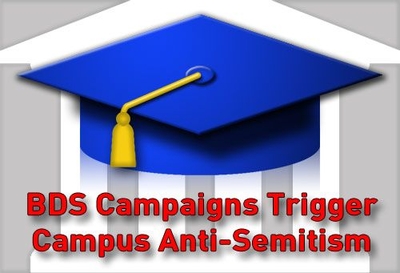 Anti-Semitic incidents seem to spring up each week on college campuses throughout the United States. According to a study, "The strongest predictor of anti-Jewish hostility on campus" is the presence of a Boycott, Divestment and Sanctions (BDS) campaign against Israel.

One recent example occurred on April 15, when the City University of New York Doctoral Students' Council passed a resolution calling for an academic boycott of Israel, 42-19. Weeks earlier, a CUNY professor and BDS advocate claimed that the killing of Palestinians in Gaza "reflects Jewish values." On CUNY campuses, the New York Observer reports, Jewish students were harassed, with "Jews out of CUNY" uttered in at least one instance, and a professor who wears a yarmulke was called a "Zionist pig."

On April 21, two-thirds of a union representing about 2,000 graduate students at New York University voted to approve a motion to support a BDS resolution against Israel. The motion also urges the union and its affiliate, the United Auto Workers, to divest from Israeli companies. The resolution asks NYU to close its program at Tel Aviv University, claiming the program violates NYU's non-discrimination policy.

About a month earlier, NYU's Students for Justice in Palestine (SJP), one of the main organizing forces behind the nationwide BDS campaign, hosted Israeli academic Ilan Pappé, described by Benny Morris as "one of the world's sloppiest historians."

As reported by AMCHA:

"Pappé blamed Jews, perceived historically as evil, for antisemitism stating, 'The [Jewish] Israelis...are responsible for bringing antisemitism back.' He denied Jews self-determination and demonized Israel stating, 'evil Zionism will come to an end – all immoral regimes do' as well as suggested rich Jews should leave Israel as a process of 'decolonization.' He further demonized Israel throughout accusing Israel of carrying out 'ethnic cleansing' multiple times. Pappé delegitimized Israel consistently referring to Israel as a 'settler colonialist project,' ...[and] promoted BDS."

The Jewish Law Students Association at Harvard University and Harvard Hillel co-sponsored an event April 14 on "The Israeli-Palestinian Conflict & the U.S." During the question and answer session, Husam el-Qoulaq, an HLS student and head of SJP at the school, insulted  Israeli Knesset Member Tzipi Livni by asking, "How is it that you are so smelly?... A question about the odor of Ms. Tzipi Livni, she's very smelly, and I was just wondering." The student's question resurrected the anti-Semitic stereotype of a "smelly/dirty Jew." Incredibly, some "progressive" HLS Jewish students later defended el-Qoulaq.

As BDS campaigns spread on campuses, anti-Semitic expression increasingly follows – from swastika-filled vandalism at UC Davis and Purdue University to student "debates" at Stanford University that implicitly dignify classical anti-Semitic tropes about Jews controlling the media and economy. Among other recent incidents:

According to AMCHA, 2016 already has seen 171 anti-Semitic/BDS incidents as of April 21. At this rate, 2016 will see a 36 percent increase in incidents over last year.

Faculty members have become increasingly active in BDS efforts and smears. During a talk at Vassar College in February, Rutgers professor Jasbir Puar accused Israel of harvesting Palestinian organs and conducting scientific experiments in "stunting" the growth of Palestinian bodies. Last month, 40 Columbia University professors signed a BDS petition. More recently, one pro-BDS professor even tried to link campus rape to Israel. As Rochester Institute of Technology lecturer A.J. Caschetta notes, "at a time when much of academe is jumping on the BDS bandwagon, there is little risk to academics who join the movement, whereas opposition to majority leftist positions often leads to a perilous path."

Indeed, academics who buck this trend may be endangering their careers. At Connecticut College, one of the few professors who defended Andrew Pessin, who hasn't been in his classroom for the past year after a hate-filled campaign miscast his comments about Hamas as a smear on all Palestinians, says his stance cost him a promotion. Manuel Lizarralde, associate professor in Ethnobotany, wrote in a faculty-wide email Jan. 26 that the college "acted like vigilantes and found the perfect scapegoat," in Pessin.

Within days, Lizarralde said, he was called in by the administration for a scolding. Noting that he was recently denied promotion, Lizarralde suggested in a recent email that this was payback for his support of Pessin. Connecticut College has "a sense of racism since we are Latinos, Jews and advocate for social injustice...[and we] are being punished [for such activism]."

Responding to the negative media coverage generated by the Pessin case, Connecticut College President Katherine Bergeron published an email to the faculty March 28, in which she championed "the right of all its members to express their views freely and openly." She failed to explain how that principle applied to Pessin, who was hounded off campus for expressing his views, only to see them twisted and turned against him. She said that the school should promote "reasoned and informed debate about the most complex issues of our time," but Pessin's absence leaves the school with no pro-Israel voice. When asked about the contradictions between her email and the Pessin affair, she declined to comment.

Meanwhile, outrage against Connecticut College continues to build, with a petition to investigate the Pessin affair and revoke the school's accreditation now exceeding 1,500 signatures.

Just as the character assassination targeting the only pro-Israel voice at Connecticut College appeared as a total surprise, BDS campaigns to influence student government votes across the country pop up with minimal notice, just weeks before the vote, giving the opposition little time to organize. That strategy helped secure SJP a BDS victory at the University of Chicago undergraduate student government in March.

It failed to persuade the university's administration, though.

Who is funding BDS? Analyst Jonathan Schanzer of the Foundation for Defense of Democracies recently told members of Congress that former employees of Hamas-linked charities now work for the Illinois-based organization American Muslims for Palestine (AMP), which is "arguably the leading BDS organization in the US, a key sponsor of the anti-Israel campus network known as Students for Justice in Palestine." Schanzer noted that AMP provides money, speakers, training and even "apartheid walls" to SJP campus activists. More surprising, the Rockefeller Brothers Fund has given anti-Israel BDS organizations hundreds of thousands of dollars, according to the Shurat Hadin Israel Law Center.

On campus after campus, the BDS movement has proven itself to be well organized and determined to poison the minds of impressionable students against Israel. It will take an equally concerted and sustained effort to oppose BDS in academia.

Guess who won't be concerned

So let me guess that none of these organizations or the incidents is probably listed with the SPLC.(or any other watchdog group) But they are on the watch for conservatives or any offensive sounding talk from them.

But it must be getting harder for any objective person to ignore this institutionalized hatred, and its promotion around the country.