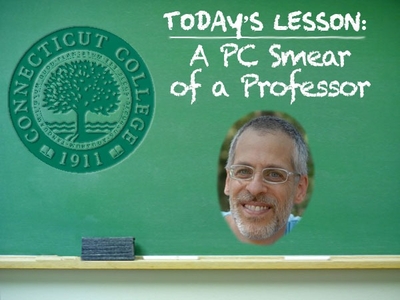 A pro-Israel professor won't be on campus at Connecticut College when classes start Monday, missing the second straight semester since his 2014 Facebook post criticizing Hamas led to death threats and ostracism.

Andrew Pessin "requested and received a sabbatical for the Spring semester to continue his studies in Jewish philosophy and Israel studies," Connecticut College spokeswoman Pamela Serfes said in an email last week. "He has been and continues to be a valued member of the Connecticut College faculty."

The vague and misleading response glosses over the intensity of the campaign against Pessin – he first took a medical leave last spring as a smear campaign against him was at full throat. The controversy exposed an administration unwilling to enforce its own honor code to protect a professor against anti-Israel activists and a student journalist responsible for covering the very controversy she had joined.

It started with an August 2014 Facebook post written as Israel and Hamas fought their latest war, in which Pessin referred to "a rabid pit bull chained in a cage, regularly making mass efforts to escape."

It wasn't until March that the comment suddenly resurfaced to ignite a campus firestorm. On March 2, three editorials condemning Pessin were published in the print and online editions of Connecticut College's student newspaper, College Voice. The op-eds, which started on the front page and covered all of page three and part of page four, accused Pessin of racism and comparing Palestinians to rabid dogs.

Not so, the professor insisted. He was referring to the Hamas terrorists who govern the territory, but the Voice reportedly didn't bother to give him a chance to present his side.

"I feel unsafe," Lamiya Khandaker wrote, not really explaining how a Facebook post from the previous summer that originally went unnoticed suddenly threatened her security. She did note that she contacted Pessin, who repeatedly tried to explain that she misunderstood his comments.

Khandaker is an activist with Students for Justice in Palestine, an aggressively anti-Israel organization active on campuses nationwide.

Two other students, Michael Fratt and Katilyn Garbe, co-authored an article falsely alleging that "Pessin directly condoned the extermination of a people."

The College Voice also posted anti-Semitic reader comments, which still can be seen. For example, one commenter wrote: "your universities and colleges are owned by Aipac..the zionists who control America and its foreign policy, apart from its banks, media and movie business." Another wrote that "student senators have been bullied by Zionist ideologues and moneychangers" and calls Pessin "an unapologetically racist bigot who likes the perks of being buddies with Israeli colonists who torture, maim and kill unarmed Palestinianns (sic) with impunity."

In April, George Mason University law professor David Bernstein uncovered evidence that Pessin's Facebook post had clearly referred to Hamas all along and wrote in the Washington Post that "the whole controversy [looked like it had been] ginned up to score anti-Israel political points."

Pessin's isolation and vulnerability were undoubtedly intensified by the school's small size: only about 1,900 students attend this private, liberal arts college located in New London.

Pessin declined to comment for this story. His wife Gabriella Rothman, however, expressed the frustration of seeing a witch hunt waged against her husband, and the disappointment in the lack of support from colleagues and the university community.

As the controversy erupted, school officials "pressured him not to speak or tell anyone that his post was being misunderstood out of context," she said. "I believe because it was trying to appease the students." A bias complaint filed against him remained active, but officials wouldn't tell Pessin what consequences he might face from it.

"He was worried his job was on the line," she said. "So he did what they told him to do."

The couple contacted the FBI and local law enforcement about the death threats, "and for two months we literally felt under siege," Rothman said.

Making matters worse, some of Pessin's "closest friends at the college joined the mob of condemnations in a heartbeat, even though they knew that the post was about Hamas. Not one of them stood up and said to the mob, wait a minute, this post is not racist or hate speech. Not one stood up and said, let's not rush to judgment, let's wait to hear his side of the story."

Pessin went on medical leave before the Spring semester ended. He has not taught since.

Exacerbating the harm to Pessin, the administration chose to host statements from scores of academic departments, school officials, student associations, and other college affiliates, condemning Pessin on the official Connecticut College website. As of Wednesday, no other issue or speech in the university community is similarly scrutinized or condemned on the school's official web site. Such selective outrage highlights the anti-Semitic climate on campus – in this case, directly enabled by the administration – and the dangers of the ironically mistitled "Office of the Dean of Institutional Equity and Inclusion," which hosts the anti-Pessin statements.

The administration has apparently taken no disciplinary action against any of the students who, in their efforts to defame Pessin, likely violated Connecticut College's Honor Code, which requires students to act "with integrity, civility, and the utmost respect for the dignity of all human beings."

Instead, the administration appears to have awarded the "Scholar Activist Award" to none other than Lamiya Khandaker – the driving force behind the campaign against Pessin and one of the most vocal anti-Israel activists on campus. This fact was discovered from Lamiya Khandaker's LinkedIn profile.

Apparently, the school chose to honor a student who (as originally reported by Daniel Greenfield) "accused Israel of 'genocide," scoffed at anti-Semitism "and even claimed that 'Starbucks supports occupation and Apartheid,'" and whose anti-Pessin writing arguably violated the school's honor code.

School officials refused to confirm or deny granting the award. What are they hiding? Maybe it's time for the administration to admit the basic policy underlying their conduct throughout the Pessin affair: anti-Israel voices are to be encouraged, while pro-Israel voices are to be condemned and silenced. They seem to have won: Pessin is silent and nobody knows when he'll be back on campus.

Too young to know better?

I can only pray that these anti-Pessin anti-Semitism advocates are a minority in this once great country? Otherwise, God help us! I wonder if Loretta Lynch condones the treatment of professor Andrew Pessin?

This is another example of the inmates running the institution! The College Board and Faculty should publicly stand up and denounce these students for what they are and throw those responsible for this outrage out of with the rest of the trash. These people are not in higher education to learn but to "teach," the doctrine of hate and discrimination associated with the radical religious crazies bent on forcing each and every one of us to adhere to their philosiphies and the heck with anyone else. Those in charge of this institution should be called out for what they are; weak-kneed, greedy pacifiers that care more for the outrageous tuition they're sucking from students then doing the "right thing!": These free-loading students permiate each college's student-body and cower those that are there to learn. I feel sorry for them but they need to rise up as a group and face these idiots or continue to be subjected to racially charged demands voiced by this group of firebrands.

These aren't college students , they are one brain cell beasts freshly spawned from the primordial ooze

The most dangerous terrorists in America right are coming out of the primordial ooze, one brain cell beasts. I suggest rounding them up and giving them to isis.

Well, Professor, I've been to your website and the Wikipedia article on you and can't figure out what your politics (if any) are, but welcome to the world of the conservative. These so-called liberals who love diversity and humanity are capable of the most vicious attacks on fellow human beings who have the audacity to own opinions different from theirs. They are too busy screaming at you right now to listen to your point of view. Soon they will be screaming for your job. Enjoy.