A British member of an ISIS execution cell traveled to the Middle East in 2009 as part of an "aid convoy" to Gaza led by former British MP George Galloway, the Daily Mirror reports.

The aid convoy known as Viva Palestina was founded by Galloway in January 2009 and has delivered millions of dollars in "humanitarian aid" to the Hamas-led government in Gaza.

Alexe Kotey's name was revealed as a member of the ISIS execution cell in an ITV News investigation along with fellow-Londoner Aine Davis. Both Kotey and Davis were part of a gang of British executioners for ISIS dubbed "The Beatles" that was led by the notorious Jihadi John (a.k.a Mohammed Emwazi). The execution cell was responsible for the beheadings of 27 hostages, including Americans James Foley, Steven Sotloff, and Peter Kassig.

Before he was drawn to ISIS, Kotey was drawn to Galloway's convoy, which defiantly admitted would benefit the Hamas terrorist group controlling Gaza.

In a March 2009 convoy, Galloway held up a bag of cash before handing it to a Hamas minister. Galloway boasted that he was about to "break the sanctions on the elected government of Palestine" and "give the money to Hamas Prime Minister Prime Minister Ismail Haniyeh."

Both the U.S. and U.K. governments have designated Hamas as a terrorist organization.

Although Viva Palestina has a currently active website for its Malaysian chapter, it appears to have ceased operations in the U.S. and Canada. When it was active, American Viva Palestina activists repeatedly acknowledged their work was "not about charity ... but in every way that we cut it, it is political."

In 2014, Britain's Charity Commission froze Viva Palestina's bank accounts and replaced the group's trustees with an interim manager. This was the second time Viva Palestina had come under the commission's radar. In a 2010 inquiry, the commission expressed concerns about Viva Palestina's "financial governance arrangements relating to the use of funds" and accused the charity of publicly exaggerated the amount of money it raised. 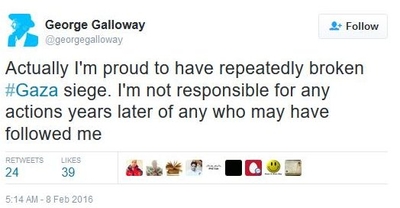 Galloway told ITV News that he does not remember meeting Kotey "There were 500 people on that convoy and George can't ever remember laying eyes on this guy," his spokesman Ron McKay said." It's possible he was there but George doesn't remember meeting him."

In a Twitter post, Galloway accused the U.K. media of engaging in an "ISIS #smear against me."

This misses the key point: The connection of a former Viva Palestina supporter to ISIS does not show that he Galloway is an ISIS supporter but showcases the kind of people drawn to his "humanitarian cause."