Islamists Use Boston Shooting to Sow Hatred of Law Enforcement 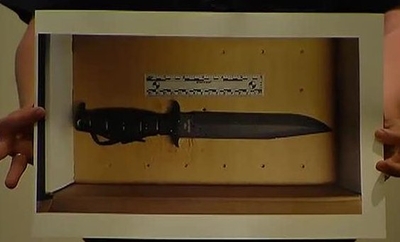 A Boston police officer and an FBI agent shot and killed a man Tuesday morning, saying he lunged at them with a military style knife when they tried to question him.

Usaama Rahim reportedly was under surveillance by a Joint Terrorism Task Force investigating his possible sympathies with Islamic State [ISIS] terrorists. Despite a lack of verified information, social media lit up almost immediately with claims that Rahim was merely waiting for a bus when he was shot in the back, and was on the telephone with his father when he was killed. The Council on American Islamic Relations (CAIR) used its Facebook page to promote a baseless theory that Rahim was gunned down in cold blood, and the terror investigation is a fabrication to cover that up. 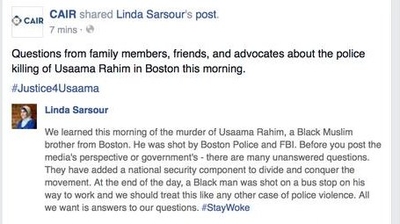 Authorities "have added a national security component to divide and conquer the movement," wrote Linda Sarsour, executive director of the Arab American Association of New York, in a post republished by CAIR's national office. "At the end of the day, a Black man was shot on a bus stop on his way to work and we should treat this like any other case of police violence. All we want is answers to our questions."

Sure, it's just asking questions. Does anyone whose understanding of police investigation involves more than watching "Law & Order" reruns expect answers to all questions in a police shooting to be answered within six hours? The truth, it seems, is not what this reaction is all about.

CAIR routinely uses scare tactics to fuel suspicion and paranoia among Muslim Americans toward law enforcement. In 2011, one of its California offices used a cartoon of a shadowy FBI agent lurking outside homes to urge Muslims to "Build a Wall of Resistance" and "Don't Talk to the FBI."

The director of that same chapter, Zahra Billoo, posted a series of her own questions about the Rahim shooting and retweeted others, including one which declared Rahim's death "was murder – murder of a black Muslim man."

CNN cited law enforcement sources in reporting that Rahim "belonged to an ad hoc terror network" and that police opened fire "after he waved a large military-style knife at officers." Other reports indicated authorities were concerned that Rahim was radicalized by ISIS social media and may have intended to attack police.

The possibility that Rahim legitimately warranted law enforcement attention was never considered in the flurry of social media posts aimed at painting the officers involved as wanton murderers. 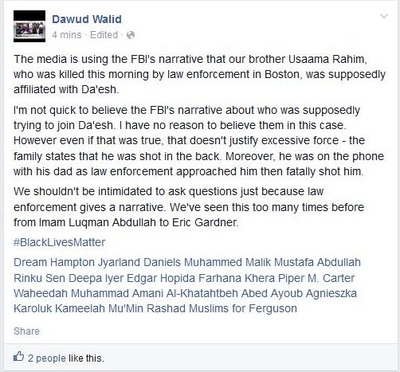 "I'm not quick to believe the FBI's narrative about who was supposedly trying to join [ISIS]," CAIR's Michigan director Dawud Walid wrote in a Facebook post. "I have no reason to believe them in this case. However even if that was true, that doesn't justify excessive force - the family states that he was shot in the back. Moreover, he was on the phone with his dad as law enforcement approached him then fatally shot him."

None of that may be true.

Walid then invokes the 2009 FBI shooting of radical Detroit Imam Luqman Abdullah. Walid's campaign to cast that shooting as unjust endures, despite videotaped evidence showing Abdullah refused to surrender as agents moved in to arrest him. Independent investigations by the Justice Department and Michigan's Attorney General found that "Abdullah was armed, resisted arrest, rejected repeated commands to surrender and show his hands, and still refused to comply when warned that a [police K-9] dog would be deployed."

During an afternoon news conference, Boston Police Commissioner William B. Evans said police video from Tuesday's shooting shows Rahim repeatedly moving aggressively toward the officers while brandishing the knife. This continued as officers retreated and ordered him to drop the weapon. Rahim, 26, was shot in the torso and abdomen, Evans said.

Rahim was subject to surveillance for the past two years, Evans said. Those skeptical voices don't have to believe any of that – and Evans's career would be over the second it is proven he lied about the confrontation in front of the national media.

Even after the news conference, Walid claimed the police's version of events "doesn't make sense" because police didn't approach Rahim with an arrest warrant.

ISIS has attracted thousands of foreign fighters, including one prominent member who was educated in Boston. On the same morning as the Rahim shooting, it was reported that Ahmad Abousamra was killed in Iraq. He graduated high school in a Boston suburb and graduated from the University of Massachusetts Boston. He made the FBI's list of most wanted terrorists in 2013 for his alleged role as a significant ISIS social media expert.

In the immediate fog of the shooting, however, an ISIS link was unfathomable and the shooting was the "murder of a black Muslim man."

Or, it could have been a confrontation only Rahim could have prevented. He could have laid down his knife and surrendered, as Evans indicated Tuesday afternoon. Until police release the video Evans mentioned, no one knows for sure.

But if the commissioner's claims prove to be accurate, then the immediate reaction to Rahim's death can only be seen as grossly irresponsible and cynical. They drove a narrative made out of thin air and gossip, but one that people will remember and believe no matter what evidence emerges.

CAIR may have realized its mistake – the Sarsour post was taken off the organization's Facebook page Tuesday afternoon, but you can see it in full here.

After terror attacks – attempted and successful – Islamist groups are quick to demand that the public not rush to judgment, especially about the perpetrators' identity and motivations. They would do well to heed their own admonitions when the situation is reversed.

Can you prove what you say?

If you have proof that the FBI were out of line here; please produce your proof or other wise be silent.

Birds of a feather...

In attacking the police, Islamists will be eagerly aided and abetted by the Left. Both followers of Islam and the Left are malevolent and authoritarian. They both wish to destroy freedom and individual rights and believe that the best chance to accomplish is to create violent chaos in our society. Hence, both groups attack the police every chance they get.

We'll see continued cooperation between followers of Islam and the Left since their long term goals are pretty much identical, to enslave everyone.

Maybe rahim was going to the store to behead someone. Much like what occurred in Oklahoma City and the UK. Who knows? One thing is for certain. He won't.