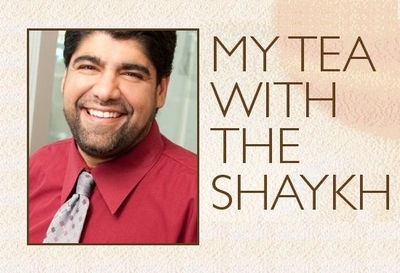 "For many years," the article begins, "Hamas was my passion."

Hussein Hamdani, a Canadian lawyer, described his excitement and nervousness over meeting Hamas founder Ahmed Yassin in Gaza. The article, published in 2004, was part of a tribute to Yassin after he was killed in an Israeli airstrike.

Hamdani calls Yassin "the people's Shaykh" and explains that Yassin was part of a group of Hamas founders who decided "armed struggle must be established" against Israel. "It was like sitting at the feet of history," Hamdani glowingly wrote about meeting one of his heroes. Yassin's vision "represented the hope that the occupying forces could be defeated." 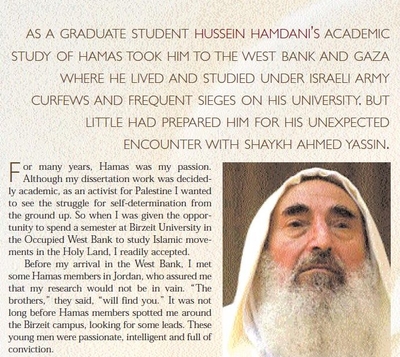 One year after openly embracing a jihadist movement in writing, Hamdani was named to a Canadian national security roundtable, where he continued to serve until being suspended April 29 pending an investigation. A spokesperson for Canada's Public Safety Minister Steven Blaney said that although questions about Hussein's "radical ideology have circulated for some time, it was hoped that he could be a positive influence to promote Canadian values in the Muslim community. It is now becoming clear this may not have been the case."

Hamdani calls the suspension political and went on radio last week threatening legal action against people who called attention to his past statements and connections.

The Hamas article has drawn little attention amid the litany of Hamdani's indulgence with radical ideas and organizations. Among the others:

As an example, he cited a proposal to grant benefits to same-sex couples, which "should clearly be seen as immoral and thus voted against or ignored."

Hamdani later served as MSA president at the University of Western Ontario. The MSA was founded by Muslim Brotherhood members who came to North America to attend universities here. The Brotherhood's goal is to spread the faith throughout the world. In the words of founder Hassan al-Banna: "It is the nature of Islam to dominate, not to be dominated, to impose its law on all nations and to extend its power to the entire planet."

U.S. Customs and Border Protection said it had "credible intelligence that conferences similar Reviving the Islamic Spirit "were being used by terrorist organizations to fundraise and to hide the travel of terrorists themselves." The statement came after five American Muslims sued the Department of Homeland Security for being detained, fingerprinted and questioned as they returned from the 2004 conference. That assessment was reinforced in an appellate court opinion which noted a review of classified information, "CBP [Customs and Border Police] had reason to believe that known terrorists, or those with terrorist ties, would be attending the RIS Conference."

Hamdani's suspension from the national security panel came the same night a French-language TVA Nouvelles report showcased these and other radical connections. He dismissed the move as retaliation by Conservative Party of Canada members who may be irked by his recent activity for the Liberal Party.

The allegations against him "are lies. I have never, ever, ever been involved with any organization that has links to terrorism whatsoever," Hamdani told Hamilton radio host Scott Thompson May 12. He also threatened to pursue defamation lawsuits against his critics.

But between 2005 and 2009, two charities Hamdani worked with – the Halton Islamic Association and the Hamdani Foundation – contributed more than $25,000 to IRFAN-Canada. The Royal Canadian Mounted Police raided IRFAN-Canada's offices last summer and added the organization to a list of terrorist supporters after auditors determined it sent nearly $15 million to Hamas in that same time period.

Hamdani also claimed a standing invitation to a counter-radicalization program organized by the U.S. departments of Homeland Security and Justice this July. Neither organization replied to emails from the Investigative Project on Terrorism seeking confirmation.

"I've been vetted by CSIS, the RCMP, the CIA, and the FBI," Hamdani claimed on Thompson's program, though it is not clear how or why the CIA would vet the Canadian lawyer.

Most of these disclosures first came from Point de Bascule (Tipping Point). In the radio interview, Hamdani accused Point de Bascule director Marc Lebuis of being "one of these grand conspiracy theorists that, 'Oh, every Muslim is a dangerous Muslim.' And so he had a whole page on me for a long, long time and I just ignored it because, you know, there's lots of kind of racist guys out there with blogs and you don't react to every single one."

Asked about the MSA Guide's instruction to "bring morality back into the campus," Hamdani said his views on same-sex marriage have changed over the years. But his rambling answer, heard in its entirety below, spent more time arguing that the charge to Islamize campus actually was an endorsement of the democratic process.

"So anyone who's saying, 'you shouldn't encourage Muslims to vote in elections' is actually acting undemocratic," Hamdani said.

None of his critics said anything remotely close. The issue was Hamdani's instruction in the MSA Guide to Islamize campus politics. Taken in context of his other activities – his admitted "passion" for Hamas, his leadership role in helping launch conferences with radical speakers and more – the concern expressed by Public Safety Minister Steven Blaney makes a lot more sense.

As a student, Hamdani was comfortable advocating that people Islamize their communities. During his time on the Cross-Cultural Roundtable on National Security, though, he has advocated that Canada follow the United States in avoiding references to religion when discussing terrorist threats and attacks.

It is not clear how long the investigation into Hamdani will last.

It seems evident to me that if you keep these people from coming into the country, the country wouldn't have the problems that these people create. The west better learn that and fast because otherwise we'll be overrun by these people.