A New York Times (NYT) editor admits that the newspaper avoids writing about Palestinian racism, yet continues to devote significant attention to the alleged bigotry of Israeli society, the Times of Israel reports. NYT opinion editor Matt Seaton proclaimed that his section would report on Palestinian racism only as "soon as they have [a] sovereign state to discriminate with," in a revealing twitter exchange with Times of Israel reporter Tamar Sternthal.

Lack of official statehood apparently renders the Palestinians free from scrutiny. This stunning admission comes in light of yet another NYT op-ed claiming that Israeli society overall is racist.

"Often overlooked, an insight into the life of one fifth of Israeli citizens who are Palestinian," Seaton wrote in a Twitter post promoting "Minority life in Israel," by Rula Jebreal. 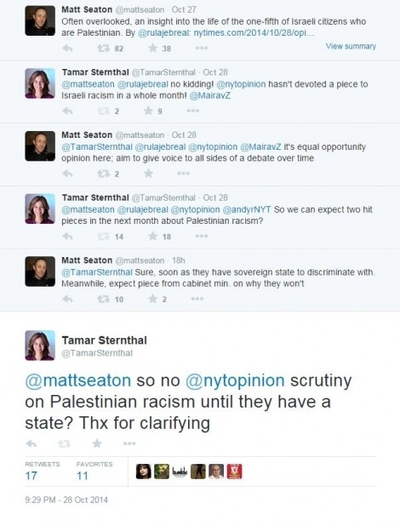 The NYT published another column focusing on alleged Israeli societal racism only a month ago and devotes considerable attention to a topic filled with dubious assertions. Many of these pieces are littered with false allegations. For instance, Jebreal falsely claims that there are "more than 50 discriminatory Israeli laws documented by Adalah, the Haifa-based Legal Center for Arab Minority Rights."

CAMERA's Gilead Ini dispelled this myth, writing to NYT editors the night before Jebreal's piece was printed, Sternthal wrote. He noted that some of the 50 laws include one that "provides that the state stamp shall be placed on all official documents." Another says that "if a child does not receive vaccinations mandated by the Health Ministry, his/her state-funded child allowance payments will be decreased by 60 percent."

Despite frequent misrepresentations and outright lies about Israel's "racist" society, there has not been a single NYT column focusing on Palestinian racism this year. The newspaper consistently overlooks blatant examples of Palestinian bigotry and incitement to violence from all levels of societies and propagated from the most senior political echelons. Just last week, both Hamas and Fatah officials praised the terrorist who rammed his car into an Israeli crowd and killed a 3-month old baby. This was not reported in the New York Times.

Sympathy over Palestinian statelessness does not justify deliberately ignoring incendiary rhetoric which incites hatred and anti-Semitism.