Syrian Brotherhood Stands Nearer to ISIS Than to U.S. 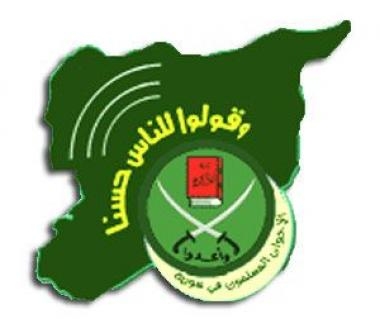 While the United States tries to build a coalition of Arab allies to join the fight against the terrorist group ISIS, now known as the Islamic State, one group which stands to benefit directly is coming out against Western intervention and expressing unity with other radical jihadists.

A Syrian Muslim Brotherhood spokesman says attacks on the Islamic State by the United States and its allies are not the answer.

"Our battle with ISIS is an intellectual battle," Omar Mushaweh said in a statement published Sept. 9 on the Syrian Brotherhood's official website, "and we wish that some of its members get back to their sanity, we really distinguish between those in ISIS who are lured and brainwashed and they might go back to the path of righteous, and between those who has foreign agendas and try to pervert the way of the [Syrian] revolution."

Rather, the first target for any Western intervention should be dictator Bashar al-Assad's regime, Mushaweh asserts, according to a translation of his comments by the Investigative Project on Terrorism.

Such comments should reinforce Western concerns about the Syrian Brotherhood, whose members are prominent among the Free Syrian Army (FSA), one of the supposedly moderate factions in the Syrian civil war which receive U.S. training and weapons. And it shows the challenge of finding truly moderate allies on the ground in Syria. Compared to ISIS, the FSA might be considered moderate. Then again, ISIS was so ruthlessly violent that al-Qaida disavowed the group in February.

In addition, the Syrian Brotherhood openly mourned the death last week of a commander in Ahrar Al Asham, a Syrian faction with ties to al-Qaida.

Mushaweh's views about the U.S. intervention are shared by other Brotherhood members. Another Brotherhood leader, Zuher Salem, minimized the ISIS threat by comparing current American rhetoric to that which preceded the 2003 Iraq invasion.

"All of these tales that are being told by America about the primitive, terrorist and threatening nature of the Islamic State are similar to the tales that have been told in regard to the Weapons of Mass Destruction in Iraq, and about the crimes against humanity," Salem wrote in an article published Sept. 13 by the Arab East Center, a think tank associated with the Muslim Brotherhood. "It is trifling to race with others to condemn terrorism and the killing of the American journalist, because we should be aware the aim of this anti ISIS coalition is to pave the way for an Iranian hegemony over the region."

Yusuf Al Qaradawi, an influential Brotherhood cleric living in Qatar, joined in criticizing the American military campaign against ISIS. "I totally disagree with [ISIS] ideology and means," he wrote on Twitter, "but I don't at all accept that the one to fight it is America, which does not act in the name of Islam but rather in its own interests, even if blood is shed."

While both are Sunni Muslim movements, each seeking to establish a global Islamic Caliphate, ISIS views the Brotherhood as too passive, while the Brotherhood sees ISIS as being unnecessarily violent in pursuing its aims.

The two have common enemies, however, including the ruling regimes of Saudi Arabia, Egypt, United Arab Emirates, and Jordan, which have worked to cripple the Brotherhood, and which ISIS considers infidel regimes which should be toppled in pursuit of a broader Islamic Caliphate.

In another indication the Syrian Brotherhood is no moderating force, it issued a statement on its website Sept. 10 mourning the killing of Ahrar Al Asham leader Hassan Aboud in a suicide bombing.

"Syria has given a  constellation of the best of its sons, and the bravest leaders of the Islamic front and Ahrar Al Sham," the head of the Brotherhood's political bureau, Hassan Al Hashimi, said in the statement translated by the IPT. "We consider them Martyrs."

Ahrar Al Sham is a radical group co-founded by Abu Khaled al-Suri, who was al-Qaida chief Ayman al-Zawahiri's designated representative in Syria. Al-Suri was killed in February in a suicide bombing believed to be carried out by ISIS.

Aboud made clear his ideological links to al-Qaida clear in a July 2013 Twitter post. "May God have mercy on the Mujahid Sheikh Abdullah Azzam. He was a scholar of Jihad and the morality." Azzam was considered a mentor to Osama bin Laden, and pushed conspiracy theories involving Jewish and Christian plots against Islam.

The Brotherhood official mourning Aboud, Al Hashimi, has visited the United States a couple of times since the Syrian civil war started. 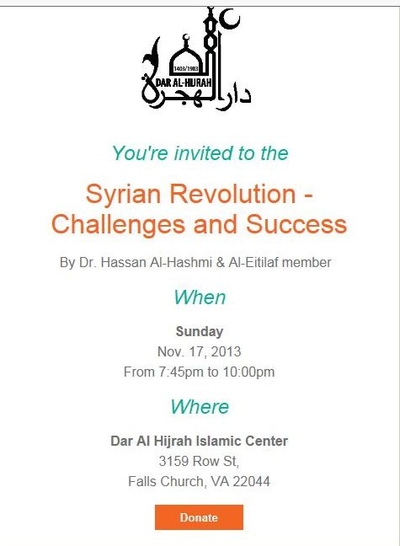 He spoke at the controversial Dar al-Hijrah mosque in northern Virginia on Nov. 17, 2013, as part of a program organized by the Syrian Emergency Task Force (SETF). The SETF has worked closely with Muslim Brotherhood members and some of its officials have expressed anti-Semitic statements and solidarity with Hamas.

Still, the SETF has partnered with the State Department to implement training projects in Syria. Last December, the SETF's executive director endorsed working with a coalition of Syrian opposition groups called the Islamic Front, even though several entities involved, including Ahrar Al-Sham, had fought with ISIS and the radical Jabhat al-Nusra, or al-Nusra Front. Four Islamic Front affiliates also endorsed a declaration calling for "the rule of sharia and making it the sole source of legislation" in a post-Assad Syria.

The announcement of the event was distributed to the Dar Al Hijrah mailing list, but without mentioning that Al Hashimi is the head of the political bureau of the Muslim Brotherhood.