Palestinian Authority President Mahmoud Abbas may not be fond of Israel and its political leadership, but he's clear-eyed about one thing: Hamas initiated and prolonged an unnecessary fight with Israel that directly led to Palestinian deaths.

This criticism comes on the heels of his statement that this week's open-ended ceasefire was, in essence, the same Egyptian proposal Hamas rejected weeks ago, before Israel's ground incursion into Gaza which sent casualties dramatically higher and cause massive damage.

Nevertheless, Hamas is trying to spin the war into a victory. That was apparently too much for Mahmoud al-Habbash, a senior Abbas adviser on religious affairs. On Thursday, Habbash likened Israel's Operation Protective Edge to a battle Mohammed fought in 625 A.D. That fight, the Jerusalem Post's Khaled Abu Toameh wrote, "is generally believed to be a defeat for the Muslims, especially because of the heavy casualties they suffered."

In that case, Habbash wrote on Facebook, "The Muslims admitted their defeat," a statement interpreted as a call for Hamas to do the same today.

That same candor has been lacking among American Islamists, including officials at the Council on American-Islamic Relations (CAIR), which apparently now acknowledges that its mission includes being "defenders of the Palestinian cause." 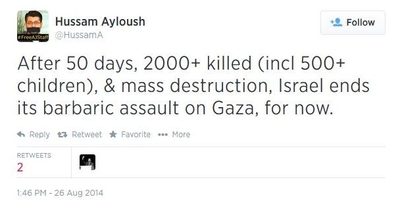 CAIR's Los Angeles director, Hussam Ayloush, has had no comment about Hamas. But after the ceasefire, he wrote in a Twitter post that he conflict was an unprovoked "barbaric assault" by Israel.

Even in the conflict's early stages, however, Abbas wondered what Hamas was "trying to achieve" by firing rockets at Israeli neighborhoods, given that Palestinians "are the losing side, and every minute there are more and more unnecessary deaths. I don't like trading in Palestinian blood."

If he can say that, why can't Ayloush and his colleagues in the United States?

This is no time for Israel to stop. Not if they want peace in the future. They need to eliminate Hamas one way or another. Treaties with them are worthless.