Israel's Operation Protective Edge is about to enter its second week, yet Hamas officials show no sign of backing down despite the utter failure of their campaign to rain rockets on Israeli population centers.

While American Islamists have remained mute about Hamas' instigating the conflict, and about Hamas officials openly urging Palestinians to run into buildings about to be targeted to be human shields, they have no qualms hyping the resulting casualty figures to criticize Israel. 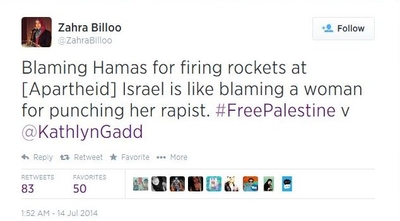 Zahra Billoo, the top Council on American-Islamic Relations (CAIR) official in the San Francisco area, likened spraying civilian communities with rocket fire to a rape victim's right to fight off an attacker.

Billoo's attitude might draw an argument from a surprising source – Palestinian Authority leadership.

Last week, PA President Mahmoud Abbas wondered what Hamas was "trying to achieve" given that Palestinians "are the losing side, and every minute there are more and more unnecessary deaths. I don't like trading in Palestinian blood."

For that, Hamas officials blasted Abbas for being "a criminal" and "a Likud member."

Abbas' criticism was echoed in remarks made by his representative to the United Nations Human Rights Council last Wednesday on PA television.

Ibrahim Khreisheh warned Palestinians not to try to rush to the International Criminal Court for relief. Palestinian behavior, he said, would look worse in comparison with Israel. "The missiles that are now being launched against Israel – each and every missile constitutes a crime against humanity, whether it hits or misses, because it is directed at civilian targets," he said in video translated by the Middle East Media Research Institute (MEMRI).

He prefaced his remarks by saying he's not a politician, so he can speak without concern for his popularity. He mentioned Hamas officials encouraging people to be human shields, staying in structures after Israel warned occupants to get out before the bombs fall. "In such a case if someone is killed, the law considers that a mistake rather than intentional killing, because [the Israelis] followed the legal procedures. As for the missiles launched from our side, we never warn anyone about where these missiles are about to fall, or about the operations we carry out."

Hamas' rhetoric leads directly to higher Palestinian casualties, Israeli Prime Minister Benjamin Netanyahu said on "Fox News Sunday." "Here's the difference between us. We're using missile defense to protect our civilians, and they're using their civilians to protect their missiles."

In a bit of public relations confounding to the sane, Sami Abu Zuhri, the same Hamas spokesman who encouraged people to be human shields, appeared on Hamas' Al Aqsa television Sunday to say his group was not leading Palestinians to destruction. "We are leading them to death," he said.

That, somehow, was offered as a good thing for Palestinians. Surreal.

Humor in the Midst

I had to laugh when Hamas said it wanted to bring Israel to the International Court for war crimes.

Ibrahim Khreisheh is right. It would almost be funny if it happened, but it may also bring some sobriety to the Israel-is-always-at-fault euphoria.

In an ironic sense, the continued firing of rockets by Hamas into Israel is a positive thing because if they ceased, the lefties and irrational peacenicks of Israel would seek a cease-fire agreement and then after a year or less they would be into the same all over again. As long as Hamas keeps sending missiles, Israel's left has no choice but to respond and in this manner (Allah be willing) Israel will continue to bomb and possibly wipe out all of Hamas.

It is very gratifying to see the various enemy factions fighting among themselves.

May it continue ad infinitum.