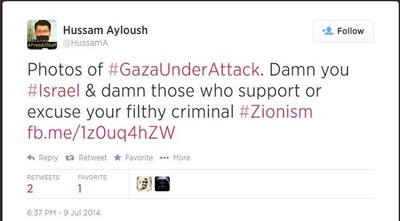 Perception and reality continued to baffle Palestinian advocates Thursday as the conflict between Israel and Gaza terrorist groups reached a third day.

Israel has conducted more than 500 airstrikes as part of Operation Protective Edge since then, yet the death toll stands at around 80 Palestinians. Their deaths are tragic, but "you'd have to conclude that either Israel is failing miserably to kill people or, more plausibly, it's largely trying not to kill them, Saleton wrote" He notes that Israel directly calls occupants of targeted buildings urging them to get out, and fires warning shots in an attempt to limit civilian casualties.

"The charges are false," Saletan writes. "By the standards of war, Israel's efforts to spare civilians have been exemplary."

For Israel's foes, "exemplary" is not a concept they can handle. National Islamist groups are condemning Israel's strikes while staying silent about Hamas rocket fire. Hussam Ayloush, executive director of the Council on American-Islamic Relations (CAIR) Los Angeles office, similarly absolves Hamas of responsibility for the violence. And, ignoring Israel's attempts to minimize casualties, he lashed out on Twitter, with a "damn you" post toward Israel and those who support "your filthy, criminal #Zionism." 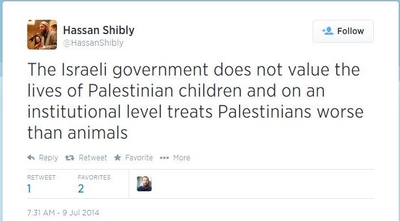 Hassan Shibly, Ayloush's CAIR colleague in Tampa, similarly blasted Israel for not valuing "the lives of Palestinian children and on an institutional level treats Palestinians worse than animals."

Contrast that with the reality of the Hamas message this week. When it comes to the Israeli warning calls, a Hamas official went on the group's Al Aqsa television this week to encourage people to stay in the buildings as human shields, the Israel Defense Forces reported, offering the video.

A Washington Post blog Thursday showed that no matter how much Hamas incites violence and places its own people in harm's way, and no matter how far Israel goes to minimize casualties, Israel still has to be faulted. The blog describes a warning call to a Khan Younis woman, Sawsan Kawarea.

"He asked for me by name. He said: 'You have women and children in the house. Get out. You have five minutes before the rockets come,'" she told a Post reporter. First a warning missile came, then, after five minutes elapsed, came the real attack, leveling the house. Several men actually ran into the house after the warning missile was fired, Kawarea said. Hamas claimed seven people died there.

This is not a new tactic, the Post reports, pointing out it even has a name – "roof knocking."

For all the good intentions, the Post calls it "a controversial tactic" and cite critics who call it psychological warfare because not every warning is followed by an actual bombing.

Hamas rocket fire, which persisted despite repeated warnings from Israel of impending retaliation, precipitated this latest conflict. Hamas fires rockets at population centers, using its broadcast outlets to advocate wiping out Tel Aviv. Israel gives five-minute warnings for people to evacuate places where the rockets are coming from, or where terrorist leaders are operating. Hamas then encourages people to ignore that, and blames Israel for their resulting deaths and injuries.

It strikes us as crazy. But it's reality.