Editor's note: This post has been updated to correct an error regarding the number of people in the Schalit prisoner exchange.

Prime Minister Benjamin Netanyahu said Sunday that "Hamas terrorists carried out Thursday's kidnapping of three Israeli teenagers; we know that for a fact."

It is the consequence, he said, of the recent reconciliation agreement that united the terrorist group Hamas into the Fatah-controlled Palestinian Authority. "The dangers of that pact should now be abundantly clear to all," Netanyahu said. "This will not advance peace; it will advance terror."

Eyal Yifrach, 19, and 16-year-olds Gilad Shaar and Naftali Frankel disappeared Thursday, apparently as they tried to hitchhike home from the Makor Chaim Yeshiva in Gush Etzion.

More than 100 Palestinians have been arrested and Netanyahu's cabinet is weighing options on a broader response.

PA President Mahmoud Abbas condemned the kidnapping Monday. But general Palestinian reaction, including in the PA-controlled media, have taken a far more disturbing tone. Celebrating terrorist attacks and honoring killers has become common in Palestinian culture under both Hamas and the PA.

In Gaza, the kidnappings sparked the requisite "celebration" in which sweets are distributed after terrorist attacks against Israelis. This instance, documented by Palestine Now, showed a picture of a woman handing out pastries, with a cutline describing "happiness at the capture of the soldiers in Hebron."

And cartoons in the PA press have taken a light, mocking tone about the situation. One changed the World Cup logo, which features three hands forming the Cup trophy, to show three hands raised in surrender and the host-country Brazil replaced by a reference to Hebron, which is close to the scene of the crime. 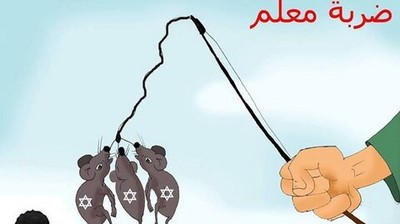 Meanwhile, a statement from the Al-Aqsa Martyrs Brigade, a branch of the Fatah movement which runs the PA, claimed responsibility for the kidnapping and said it would hold the three teens "in return for thousands of prisoners." The Times of Israel reports that the claim's authenticity is in question.

Kidnapping Israelis has been a goal for Palestinian terrorist groups, including Hamas and Islamic Jihad, to generate prisoner-swaps for terrorists in Israeli prisons. In 2011, Israel agreed to release more than 1,000 prisoners, many with blood on their hands, to win freedom for Gilad Schalit, a soldier kidnapped and held by Hamas for five years.

In so small a country it shouldn't be difficult to find the three boys or at least to apprehend the kidnappers. One simply surrounds the area where the boys were last seen - a radius of perhaps three miles and one arrests all the locals caught up in that sweep and then you start interrogating and interrogating. Within 24 hours you'll have your answers if you interrogate effectively. In such situations you can't waste time. Israelis have to wake up to the fact that they are at war. The whole world is at war with Islam but Israel is Geographically in the middle of it and more vulnerable than the rest of the world. Israel needs to introduce the death penalty and to isolate its bleeding heart liberals who are as dangerous to a country as the outside enemy.