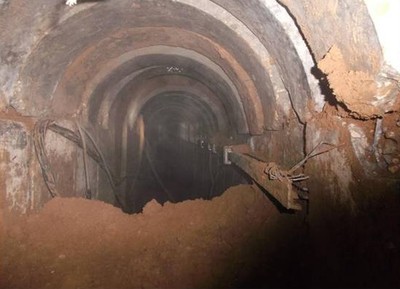 Israeli military officials say they uncovered a Hamas tunnel that might be the largest yet discovered. It runs hundreds of meters into Israel from Gaza and posed "a direct link and threat to Israeli territory, and enable Hamas terrorists to reach and harm Israeli civilians."

Similar tunnels have been built with the intent of launching terrorist attacks and trying to kidnap Israeli soldiers.

Hamas claimed this tunnel was old, but Israeli Defense Force officials say they found a generator and other building materials inside which indicated it was still under construction. They estimated that more than 500 tons of cement was used in building support arches for the tunnel, which ran 20 to 60 feet underground.

"We have no doubt we disturbed them in the middle of work," an Army source told the Jerusalem Post. "We've recently increased efforts against tunnels, and have uncovered three over the past months."

"Tunnels are an ethos for Hamas and the source of many of its operational successes," the source said. "As soon as it loses three tunnels in a number of months, that represents a major blow to it."

The IDF discovered a similar tunnel last fall that had electricity and telephone lines. Hamas diverted 24,000 concrete slabs meant for civilian construction to build that tunnel.

Tunnels played a critical part of Hamas operations until the past year. Israel has uncovered several meant for terror operations, while Egypt has destroyed hundreds of tunnels that had been used to smuggle goods and material into Gaza. The tunnels were considered a significant cog in Gaza's economy, which now is in crisis.

The IDF discovery shows Hamas makes that crisis worse by continuing to emphasize terror more than the needs of the Palestinians it is supposed to represent.

I don't expect to be told any state secretes but I wonder about several potential responses. Would it be possible to pump an explosive gas into the tunnel, set it off and see where it goes? How about flooding it with water? Would hidden monitors be useful in sending information to Israel? Before releasing prisoners to return home and then to kill again, could you give them a non curable and highly infectious illness? Catch and release wastes time and money, to say nothing about the loss and suffering of the people and guests of Israel.