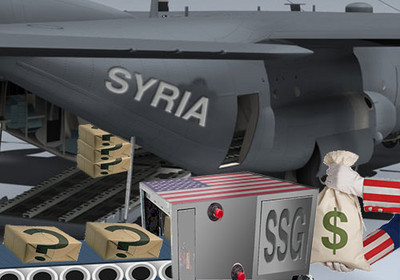 The aid, consisting mainly of food and medical supplies, is financed by a State Department grant and routed to the Free Syrian Army by an organization of Syrian Americans that simultaneously lobbies Congress for more rebel aid.

The Free Syrian Army (FSA) is considered by Western governments to be the more moderate of rebel factions fighting Assad. In recent weeks, the FSA has battled the Islamic State in Iraq and Syria (ISIS), a group so vicious that al-Qaida disassociated itself from it.

But that doesn't mean the FSA is free of radical elements. Reports from Human Rights Watch and Amnesty International during the past two years say FSA brigades have committed war crimes including kidnapping, torture and executions.

The Supreme Military Council is a loose coalition of individuals who represent militias fighting under the FSA banner. Zahran Alloush, was a supreme council member when the American aid was sent. Alloush, a co-founder of a new opposition coalition called the "Islamic Front," has praised another al-Qaida affiliate in the Syrian jihad.

"Jabhat Al-Nusra are brothers who have firm strength, and who fight the enemy in the Alawite regime, we have jointly conducted many military operation and we saw great pluck from them," Alloush said in November. "I met with their Sharia counselor, Abu Maria Al Qahtani, and I did not see any differences between the ideas of their counselor and the ideas of ours, their counselor could be ours if we were the same group, I also appreciate my great brother Abu Mohamad Al Jolani, the leader of al-Nusra."

Another supreme council member, Jamal Marouf, is cast as a moderate, but allied himself with radical jihadists in a January Twitter post.

"The front of the Syrian revolutionizes, The Islamic Front, and Jabhat al-Nusra, Muhajreen and Ansar, we are all in the fighting front together against the regime. What happened now is a fitna (strife), God damn who ignited it," Maarouf wrote.

The Treasury Department granted a license to the Syrian Support Group (SSG) in 2012, allowing it to send goods to Syria despite U.S. economic sanctions against the country. The license expires at the end of July. In addition to the known radical ties held by some FSA leaders, there seems to be no public information to show where the $10 million in food and medical supplies went, or what steps are taken to ensure it did not fall into hands of some of those extremists.

Since the license was granted, no written reports have been produced showing which brigades have benefited from the SSG's aid.

The SSG website says it became "the U.S. Government's implementing partner" in distributing approximately $10 million in food, medical supplies and other items since last April. A picture posted on the SSG's Twitter account in May shows members of the group unloading supplies in boxes marked "Halal" from a truck.

Some of the aid has been delivered using a cargo plane operated by the U.S. Air Force in conjunction with the State Department.

The SSG was founded in December 2011 by Syrian émigrés to support the FSA. The Syrian-American group has close ties with Free Syrian Army leadership. In a February 2013 video, recently-ousted FSA chief Salim Idris asked Syrian Americans interested in supporting his cause to donate to the SSG.

Its lobbying efforts in Congress and with the White House are based on the SSG's ability to provide intelligence and information about what is happening inside Syria to policymakers. The group has had more success getting its message across at the White House than on Capitol Hill, SSG spokesman Dan Layman told The Huffington Post last spring. It also has gained allies in U.S. Sens. John McCain and Lindsey Graham on the Republican side, and Bob Casey, Robert Menendez, and Dianne Feinstein, who chairs the Senate Intelligence Committee, on the Democratic side.

The SSG served as a "conduit" for the flow of information between the Supreme Military Council (SMC) and the United States government since the Obama administration closed the U.S. embassy in Damascus in February 2012. Robert Ford, the U.S. ambassador to Syria, wrote in an April 29, 2013 letter that the SSG was "a major factor in facilitating the Department of State's relationship with the [FSA] Military Councils and the Chief of Staff of the Supreme Military Council." One rebel leader told Time magazine in September that he does not differentiate between the SSG and the U.S. government.

The Telegraph reported last July that the British Foreign Office had demanded the SSG repay thousands of pounds after it determined a grant the group had received was improperly spent. SSG never collected significant private donations, the story said, in part because the State Department made it clear its money could not be used to buy weapons.

FSA leaders had little control over rebel units when the Obama administration approved the SSG license in July 2012. Reports of jihadists fighting under the FSA's auspices appeared three months earlier, not long after the rebel faction's creation.

"The … problem is the fighters of the FSA ... are difficult to control. So we need the world's help right now - and after the regime has fallen," FSA Col. Malik al-Kurdi said in an August 2012 interview with Al-Jazeera.

FSA fighters have been involved in attacks on Syria's Christian population, who are targeted because FSA considers them to be pro-Assad. Several massacres of Christians by FSA brigades have been reported, including one last May, and the seizure of the Christian town of Ma'aloula in September by FSA units working with al-Qaida's Syrian affiliate Jabhat al-Nusra.

Mazen Asbahi, the SSG's president, conceded that many of the FSA's brigades fight alongside Jabhat al-Nusra.

"Yes, that's true that in certain battles the al-Nusra guys will come and will fight alongside the Free Syrian Army brigades, and it's hard to prevent that given the fight that's on the ground, given the type of violence that's being visited upon civilian areas by the Assad regime," Asbahi said in a September interview with Boston public radio affiliate WBUR. "How do we know who the good guys are?

"The al-Nusra guys and the Free Syrian Army brigades do not sort of interrelate on a day-to-day basis. They're not part of the same command infrastructure. They're very separate."

That answer cannot explain the pro al-Nusra stances of several individuals who were members of the Supreme Military Council before the Islamic Front formed in November. The Front was created after six Islamist brigades withdrew from the FSA's command over disagreements with Idris.

Abu Ahmad Issa Sheikh, the Islamic Front's leader, told Reuters in November that his new faction aimed to replace the Assad regime with an Islamic theocracy. Sheikh's previous group was part of the supreme council under the Free Syrian Army umbrella.

Although the SMC professed a commitment to the values of Western democracy in its Proclamation of Principles, its Islamist members openly professed skepticism about democracy even before they split with the FSA in November. The proclamation calls for a "free and democratic Syria" where Syrians would enjoy freedom and equality regardless of ethnicity, creed, religion or class.

Sheikh told Al-Jazeera in a June 15 interview that his group did not "want people to be ruled by statutory laws cited by humans, whether right or wrong" and that democracy could "interfere with Islam."

"We have three conditions in order to join the state or for us to be a state. First: the reference of this state is that the sole source for this state is Islam, and we do not take the rights of others," Sheikh said. "This is our right because we are 85% of the segments of Syrian society, Sunni Muslim. It is our right."

Sheikh shuttled back and forth between Turkey and Syria last August and met with Western diplomats.

Alloush, cited earlier praising Jabhat al-Nusrah, allowed his group Jaish al-Islam (Army of Islam) to fight under the black banner of jihad rather than the pre-Ba'ath Syrian flag while it was under the FSA umbrella.

The Obama administration continues to struggle to find a coherent policy for dealing with Syria's bloody civil war. Food and medical supplies seem innocuous enough, but if the SSG's license is to be renewed, and more taxpayer funding committed, more needs to be done to ensure the U.S. government does not underwrite violent jihadists who could be worse than Assad's brutality.