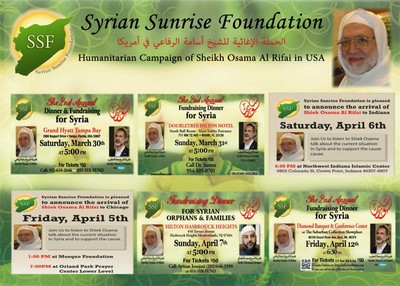 A Syrian Sunni sheik who raised at least $3.6 million during a U.S. fundraising tour last April has blessed a new coalition of Syrian jihadist groups aiming to replace the Assad regime with an Islamic state.

Sheik Osama al-Rifai, who raised the money for the Franklin, Mich.-based Syrian Sunrise Foundation, endorsed the creation of the Islamic Front in a Nov. 22 YouTube video. The front represents a merger of seven jihadist groups fighting Bashar al-Assad's forces. Many of them have ties to al-Qaida.

"The unification of these great Islamist and jihadist groups is not a normal piece of news, but is a great event that brings the happiness and thrill to every Muslim, not only in Syria but in the whole Islamic world," al-Rifai said in remarks translated by the Investigative Project on Terrorism. "I congratulate this brilliant news; I congratulate the brothers who formed it. I cannot say that we bless this group because it is they who should be blessed by them."

In Dallas, he said that anyone who works to raise awareness about what is happening in Syria was "a jihadist for Allah."

"I would love to address my brothers who are in charge of the organizations here like Shaam Relief, and Syrian Sunrise Foundation, you must be very aware that you are too performing jihad just like your brothers in Syria."

Calls seeking comment from the Investigative Project to the Syrian Sunrise Foundation and its President Ahmad Alabas were not returned.

The United States and United Kingdom suspended all non-lethal aid to rebels in northern Syria Wednesday, after the Islamic Front took over bases that had belonged to the western-backed Free Syrian Army. Officials fear the existing supplies could fall into the jihadists' hands. That assistance could include items such as radios, body armor, transportation and night-vision goggles.

He spoke April 5 at the Mosque Foundation in Bridgeview, Ill. Two mosque leaders, Kifa Mustapha and Jamal Said, were implicated in a previous terror-support investigation. Said appears on a telephone list for the "Palestine Committee," a Muslim Brotherhood umbrella group charged with supporting Hamas politically and financially. Mustapha was a paid fundraiser for one of the committee's branches, raising more than $300,000 for the Holy Land Foundation. Five foundation officials were convicted in 2008 of providing material support for Hamas.

The Syrian Sunrise Foundation likely brought al-Rifai to the U.S. due to his reputation inside Syria as the head of a movement with a large charitable operation.

Its website says that it aims "to send aid to families, orphans, and widows affected by the conflict." The group claims to have a "well-established humanitarian network of hundreds of workers" and denies having any sort of "any political, religious, or any other agenda."

In June, al-Rifai participated in a conference in Cairo in June that supported overthrowing Assad.

The conference was also attended by radical Sheikh Yusuf Qaradawi and former Egyptian President Mohamed Morsi. The conference closed with a statement by an Egyptian cleric, Sheikh Mohamed Hassan, saying, "We're obliged to jihad in order to assist our brothers in Syria, with fighters, funding and arms."

And al-Rifai made vicious anti-Semitic statements in a 2010 speech, blaming Jews as "absolute evil" for corrupting society.

"Each time they lived with any nation, they subjected this nation to a curse, and they don't have any friends among the whole nations," he said. "This friendship between the Jews and the West is a fake and fabricated one. All the politicians and the intellectuals in the West are aware of this ... but because of political pressure they cannot admit that. If they were really free, they would kick Israel with their legs."

Jews corrupted Western women "through Freud," al-Rifai said before invoking a classic anti-Semitic forgery: "And the Jews mention in the Protocols of the Elders of Zion that all the nations are the donkeys of the Jews, and that they cannot humiliate and ride these donkeys until they can corrupt them. This is in the Elders of Zion, and I ask the God to give me the capability to explain all of that."

Al-Rifai frequently speaks about morality and uniting all Syrians, but endorses a coalition that opposes those ideals. The coalition al-Rifai now supports could have as many as 45,000 men under its command, IHS Jane's estimates.

Most of the factions that make up the Islamic Front, including its leadership, have had close relations with Al-Qaida's Syrian branches, Jabhat al-Nusra and the Islamic State of Iraq and Greater Syria. They have issued statements expressing appreciation of the Syrian al-Qaida branch.

"This independent political, military and social formation aims to topple the Assad regime completely and build an Islamic state where the sovereignty of almighty God alone will be our reference and ruler," Ahmed Abu Eissa, leader of the Suqour al-Sham Brigades, said in a Reuters report following the Islamic Front's creation.

The new coalition's charter rejects secularism as contrary to Islam, saying that it divides "religion from life and society" and reduces it "exclusively to rituals, customs and traditions." Its leaders claim that they would not institute an "oppressive, authoritarian system," saying Syria should be ruled by an Islamic consultative council or shura.

"[The Islamic Front] does not participate in any political process contrary to religion or which give sovereignty to anything other than the Law of God Almighty, with the political process which does not recognize that legislation is the right of God alone," the charter says. "The Front cannot participate in, recognize or rely on it, for religion without politics is forbidden in our religion, and politics without religion is rejected secularization."

Zahran Alloush, leader of Jaish al-Islam and chief of military operations for the Islamic Front, solicited foreign fighters to come fight for his faction in a 7 tweet. He also called for resurrecting the caliphate in a July 25 YouTube video in which he also advocated cleansing Syria of Shiites and Alawites. Videos show his fighters flying the jihadist black flag rather than the pre-Ba'ath Syrian flag used by the Western-backed Free Syrian Army (FSA) and its allies.

Alloush was also a member of the FSA military council along with Sheik Ahmed Issa, who heads Suquor al-Sham. Both quit Tuesday and issued a declaration announcing their withdrawal from the body. Zaman Alawsl, an Internet newspaper focusing on the Syrian Civil War, reports that the declaration came hours after FSA Chief of Staff Gen. Salim Idris allegedly told a British newspaper that the FSA would fight Jabhat al-Nusra and other Islamic extremist groups should Assad fall.

Fighters from Harakat Ahrar al-Sham have fought alongside Jabhat al-Nusra. The two groups coordinated the September attack against the ancient Christian town of Ma'aoula. Ahrar Al-Sham also has worked with the Free Syrian Army and with the Syrian Muslim Brotherhood.

Hassan Aboud, the head of Ahrar Al-Sham, told Al-Jazeera in a June 8 interview that his group had previously taken part in a number of joint operations with Jabhat al-Nusra.

He agreed with the al-Qaida affiliate that "Islam is the precept for actions," but his group's only differences with it al-Nusra came down to tactics and some provisions.

He expressed the same sort of opposition to democracy found in the Islamic Front's charter.

"Democracy is people governing people, according to rules they please," Aboud said. "We say that we have a divine system whose law is Allah's for his creatures and his slaves who he appointed as viceregents on this Earth."

Abu Muhammed al-Husseini, the head of al-Sham's political office in Raqqa, told Reuters in July that his group had no major disagreements with al-Nusra, but only differs with it when it comes to "operational details."

Suquor al-Sham signed a declaration with Jabhat al-Nusra in September defining their goal as obtaining "the rule of sharia and making it the sole source of legislation" and that those groups opposed to the Assad regime should operate within "an Islamic framework." It was also signed by Islamic Front members Ahrar al-Sham, the Tawhid Brigade and Jaish Al Islam.

Suquor al-Sham has been involved in beheadings, such as one of a Syrian civilian shown in a YouTube video from February.

Issa, like others in the Islamic Front, has a dim view of secular democracy. "We do not want people to be ruled by statutory laws cited by humans, whether right or wrong," he said in a June 15 interview with Al-Jazeera.

Al-Rifai and the Syrian Sunrise Foundation

Al-Rifai was involved in the Muslim Brotherhood's 1979-1982 uprising against dictator Hafez al-Assad. He lived in exile in Saudi Arabia for about 15 years before returning to Syria in 2000.

He previously held friendly relations with Bashar al-Assad, so much so that the Syrian president personally visited him in 2002 out of respect for his personal stature in Syria. That changed in August 2011, after Syrian security forces stormed al-Rifai's mosque in Damascus, which was one of the main locations for anti-Assad protesters in the early days of the uprising.

Al-Rifai leads the Zayd Movement, a Sufi faction with 20,000 followers and is said to control 450 mosques in Syria. Zayd runs charities around Damascus that provide food for needy families. The Syrian Muslim Brotherhood has actively sought to build an alliance with al-Rifai and Zayd in an effort to regain influence in Damascus.

Al-Rifai's recent endorsement of the Islamic Front and the blurry lines between the Sunni factions fighting to topple the Assad regime and the millions it has raised in the United States raises certain questions. That includes the millions raised by the Syrian Sunrise Foundation.

Once the money leaves the United States it becomes next to impossible to track. This is especially true of a warzone such as Syria.

The Holy Land Foundation example stands as a case and point. The charity claimed it merely routed aid to needy Palestinians, but evidence presented during the trial showed millions of dollars were sent to groups controlled by Hamas.

"The purpose of creating the Holy Land Foundation was as a fundraising arm for Hamas," U.S. District Judge Jorge Solis said during a 2009 sentencing hearing.

The Syrian Sunrise Foundation markets itself with a similar message of helping the needy.

But it raised millions of dollars with a Syrian cleric who now supports a jihadist coalition tied to al-Qaida, and someone whose anti-Semitic rantings were known years before his American tour. Syria's civil war created an enormous humanitarian crisis.

My question is this: Since Hussam Ayloush, the SoCal head of CAIR, sits on the board of the Syrian American Council in Los Angeles, which promotes the Sunrise Foundation on its website, why would they align themselves with a group (SSF) aligned with a man like Al -Rifai, who supports terror-linked rebels and has made such anti-Semitic statements?