The Muslim Public Affairs Council (MPAC) is promoting a story accusing Israel of opening a dam during a freak winter storm, causing massive flooding in the Gaza Strip. 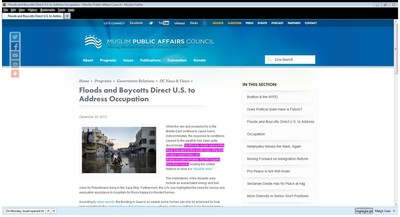 "On Monday, Israel opened the Wadi Sofa dam in the south Gaza Strip that flooded Gazan towns and displaced approximately 10,000 Gazans from their homes leading the United Nations to label it a "disaster area," the article says.

MPAC posted the article Friday and also sent it on the group's email list.

The problem is that the dam doesn't seem to exist, and the story, originally pushed by Hamas, was debunked days ago by the Times of Israel.

A spokesman for Israel's Water Authority told the newspaper that the story is "baseless and false" and that Israel has no dams in that area. The flooding is real, but caused by overflowing reservoirs after 10 inches of rain fell in a three-day period. That's 60 percent of the normal annual rainfall in the area.

"The Zionists, of course, have taken advantage of the situation, sending some pumps and supplies which they had deprived the besieged Gaza Strip of," Marzook wrote on his Facebook page Sunday.

This isn't the first time MPAC burned itself by promoting questionable material. Last year, it linked to an article defending convicted terrorist Tarek Mehanna, arguing he was a victim of "a hysterical witch-hunt for 'radical' Muslims." Mehanna's conviction for providing support to al-Qaida and conspiring to commit murder abroad was upheld last month by the 1st Circuit Court of Appeals in Massachusetts.

He traveled to Yemen in hopes of receiving jihad training. When that didn't work, he returned to Massachusetts and posted translations of material supporting al-Qaida and "Salafi-Jihadi perspectives."

Evidence showed Mehanna's work was "in response to Al-Qa'ida's call," prosecutors wrote, "and that he was pleased to be associated with Al-Qa'ida through his work."

Past MPAC position papers criticized American terrorist designations for Hamas and the Palestinian Islamic Jihad and called the 1983 Hizballah bombing of a U.S. Marine barracks in Lebanon during a peacekeeping operation, "exactly the kind of attack that Americans might have lauded had it been directed against Washington's enemies."

MPAC enjoys good relations with the White House and other politicians and is considered influential on policy. It's a wonder, given the organization's reckless tendency to embrace terror suspects and promote baseless allegations.

Maybe it was Hoover Dam. Maybe somebody in Nevada can check it out.

" MPAC enjoys good relations with the White House and other politicians and is considered influential on policy. It's a wonder, given the organization's reckless tendency to embrace terror suspects and promote baseless allegations."

This is not a wonder to any who've been paying attention over the past decade and especially since "The One" came on the scene in 2007-2008. Whatever Obama's true faith, if he has one, he has definitely demonstrated an affinity for the Muslim world with the Middle East, Islamist advisers he employs within the upper echelons of his administration. Witness his outspoken support for the Muslim brotherhood, his characterization of the takeover of Egypt by General Al Sisi as a coup, his cutoff of funding to Egyptian leaderhip and his efforts to get the Muslim Brotherhood Islamist, Mohammed Morsi reinstated as the "democratically elected" president despite massive protests by the Egyptian people.

That MPAC enjoys good relations with the White House should not be a surprise to anyone.