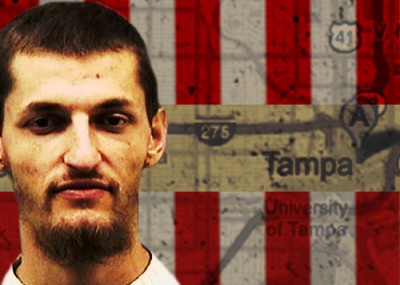 "We all have to die, so why not die the Islamic way?" Sami Osmakac, a 25-year-old immigrant who plotted a suicide terror attack in Tampa, told a confidential informant. When the informer tried once more to dissuade him from his plans, by asking whether he wanted to get married and have children, Osmakac replied that he would build his family in Paradise.

Osmakac was arrested Saturday night, after receiving nonfunctioning guns and explosives from the FBI and making a martyrdom video. Although he initially planned to blow up a car bomb outside of Tampa's nightlife district of Ybor City, he altered his plan to avoid being cut short by police patrols around the busy club scene. He currently faces one charge of attempted use of a weapon of mass destruction, with the potential of life imprisonment and a $250,000 fine.

Despite Osmakac's commitment to carry out multiple deadly attacks, CAIR officials went on the offensive against the FBI for capturing another "innocent" Muslim. Trying to create tension between Muslim Americans and law enforcement is part of CAIR's regular response to government counterterrorism investigations.

Executive Director of CAIR San Francisco Zahra Billoo was quick to paint the arrest as a scam, stating that she was "wondering how much of the thwarted terror plot in Florida was seeded by the FBI, [a]ppreciating that even the MSM mentioned the informants." Dawud Walid, Executive Director of CAIR-Michigan, released a tweet saying, "it is not the job of civil rights groups to be commending the FBI on their use of informants, given the FBI's history."

The Director of CAIR's Florida chapter, Hassan Shibley, gave a more lukewarm and confusing response to news of the arrest. Although he stated that Osmakac "was no friend or supporter of the Muslim community" and that the Muslim community had played a "vital role" in his arrest, he also expressed "concern about a perception of entrapment."

"The weapons and explosives were provided by the government. Was he just a troubled individual, or did he pose a real threat?" said Shibly to the press this morning. As the day progressed, he was quoted casting additional mistrust of the government's intentions. "I think the fear at the point is that he was just mentally disturbed...I think that community members hoped that by reporting him, he could get the proper assistance," Shibly explained to MyFoxTampaBay.

The details of the case make plain the intentions of the plotter.

The FBI was alerted to the case when a "Confidential Human Source [CHS]" approached them in September, claiming that Osmakac had asked the CHS where he could purchase al-Qaida flags. The CHS then hired the suspect at his business and by November was recording conversations between the two of them.

On November 30, FBI agents recorded the suspect telling the informant that he wanted to carry out a local attack, and asking where he might be able to acquire weapons and explosives. The CHS then connected the suspect to undercover FBI agent, who agreed on December 21 to provide the suspect with an AK-47, "a couple of Uzis," at least ten grenades and a suicide bomber belt.

Unusual for homegrown terror attacks, the plotter spoke about his lack of trust in using the Internet to download terrorism manuals. Whereas other Western terror plotters made extensive use of online publications and videos, both in recruitment and training, Osmakac asked the undercover agent to provide him with hands-on weapons training.

Over the course of his conversations, the suspect continued to expand his plot. At the December 23 meeting, he asked that the FBI operative provide him with three additional explosive devices, which be detonated remotely at targets across Tampa Bay. He also engaged the agent to provide him with a high-intensity explosive belt filled with gun pellets, which could be used against civilians and any police who might try to end his attack. In particular, he looked to target crowded places with the explosives, including two local night clubs.

His range of targets also varied over the course of his plot, ranging from nightclubs and a police station at first, to a later decision to strike an isolated Irish bar. When the undercover agent asked him about attacking military bases, he claimed the facilities "are so locked up, I have to do something else."

He also talked of taking down Tampa Bay area bridges to "crush the whole economy" in the region and to create food crisis, but concluded it need more people. Osmakac also lamented that he was unable to inspire other local Islamists to enter the plot with him, indicating that other local Muslims knew of his plot and had not reported him.

As the attack drew closer, the suspect laid out motives common to most Islamist terrorists. He intended the plots to damage America's sense of security as a nation, pointing out how he wanted the bombing to "terrify them," and prove that no amount of homeland security funding could provide protection. He also intended to seize hostages to trade for Islamist terrorist already in American jails, and he planned to kill any hostages after his demands were met. "Once I have this," he stated about the hostage exchange, "they can take me [away] in five million pieces."

Shortly before his arrest, the special agent was instructed by the suspect to help him make a martyrdom video. The 8 minute clip included Osmakac's belief that Muslim "blood" was more valuable than that of the disbelievers, and that he wanted "pay back" for supposed grievances against his coreligionists.

CAIR is nothing more than a front group to promote terrorism in the US.