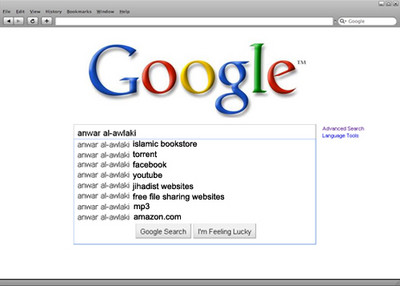 It might not matter if the C.I.A. completes one of its most high profile missions – the targeted killing of Anwar al-Awlaki, a 39-year-old American Imam living in self-imposed exile in Yemen. Even if he were caught, captured, or killed tomorrow it will be nearly impossible to contain the dangerous messages he has released over the last decade.

That's because Awlaki and his followers have used the Internet to extend his message to would-be radicals in the West. It's not just the traditional jihadist forums and Arabic file sharing sites that carry his speeches. Increasingly, his voice is making its way onto popular Western websites like YouTube and Amazon, music sharing portals and Western file sharing sites. The phenomenon is so widespread and his message virulent, that popular Arabic news channel Al Arabiya has dubbed him the "Bin Laden of the Internet."

Eliminating his online influence has proven more difficult than simply attempting to erase his YouTube presence. From the seemingly innocuous popularity of his earliest speeches, to his more recent al-Qaida declarations, Awlaki's lectures speak to a broad audience. Listeners range from those seeking general Islamic information to would-be extremists looking for scholarly justification for violence, and many in between. With blurry lines between the bad and good in earlier speeches, and unbridled calls for murder since then, his reach online has some counterterrorism officials calling him the "Most Dangerous Man in the World."

Awlaki, an American born cleric who has taken refuge in the isolated mountains of Yemen's Shabwa province, didn't begin his radicalization career as an Internet sensation. Rather, Awlaki built up his fame as a popular cleric who translated Islamic history into a vivid storyline, replete with examples from Islamic holy books, the Qur'an and the Hadeeth. As journalist Nussaibah Younis described him, "He taught by telling stories. He spoke about the prophet Muhammad, his wives, his companions and their lives with such passion, intimacy and humour – it was as though he knew them first hand."

It is these speeches which provide a gateway to more radical works, as many websites hosting them do not mention Awlaki's current al-Qaida connections. And despite claims to the contrary, these speeches contain some of Awlaki's earliest hints at the acceptability of violence. In them, he promotes Sharia law over all other forms of justice, and casually discusses the need to sacrifice during jihad. For example, in "Lives of the Prophets," Awlaki declares:

"Talking big is easy, but the sacrifice, and especially long-term sacrifice which jihad needs, that is difficult. Jihad is not only sacrifice, but it is a long term sacrifice. And that is where people fail. If you are asked to sacrifice in one time, you could be fired up by a speech, and then you would give out your money, for example, and you would sacrifice. That could happen. But when you're asked to sacrifice for a long period, then you're suffering hardship for a long time, that is what causes people to fail."

The encouragement of violence has not slowed the popularity or availability of speeches from mainstream Islamic and Western websites. They can be easily purchased off of Islamic media websites, such as Baltimore-based http://islamicbookstore.com, the "Internet's largest Islamic store." The same is true for Houston's Dar-us-Salam.com and the United Kingdom's islamicgoodsdirect.co.uk.

Internet sellers have also not warned buyers of Awlaki's connection to terror. For example, islamicgoodsdirect.co.uk continues to sell this product accompanied by praise of Awlaki, while islamicbookstore.com simply sells the speeches with no mention of their author. Even mainstream media giants like Amazon.com continue to sell these speeches with no warning of his other works.

Awlaki's more provocative speeches, including several that played key roles in a variety of terror trials, are just as easily obtained.

In, "Allah is Preparing Us for Victory," Awlaki notes that Iraq is "the pool that America will drown in," while laying out example after example of the need to fight in violent jihad. Invoking Qur'an and Hadeeth, as well as jihadist scholars like Abdullah Azzam and Syed Qutb, Awlaki announces that "the solution of the Ummah [nation] is to go back to jihad in the path of Allah." This speech can be found for free on Islamist websites like kalamullah.com and ghurabaa.org, or for purchase on Amazon.com.

Other popular lectures have become classics in jihadi circles, and have been major inspirations to aspiring terrorists. But that hasn't stopped their proliferation across the web. The series "Constants in the Path of Jihad" has been acknowledged as a central speech inspiring the Fort Dix plotters, Canada's Toronto 18, and aspiring New Jersey terrorists Mohamed Alessa and Carlos Almonte. Despite the lecture's central role in several terror plots, users have uploaded it for free on the Internet database, archive.org. Likewise, full and partial versions of the series are accessible on mp3 websites like beemp3.com or gosong.net.

Even Awlaki's al-Qaida materials are within easy reach of Western audiences. Archive.org features Awlaki's May 2010 interview on an al-Qaida media outlet, in which he praised Fort Hood attacker Nidal Malik Hasan and called for other Muslims to repeat his attack. Al-Qaida's English language Inspire magazine can also be accessed readily, even from Western websites trying to warn against jihadist motives.

These texts and speeches are central to Awlaki's popularity in jihadist circles. For example, in the first issue of Inspire, Awlaki states, "I specifically invite the youth to either fight in the West or join their brothers in the fronts of jihād: Afghanistan, Iraq, and Somalia. I invite them to join the new front, Yemen, the base from which the great jihād of the Arabian Peninsula will begin, the base from which the greatest army of Islām will march forth."

In addition, it is no longer necessary for aspiring radicals to visit multiple websites to obtain an entire collection of Awlaki's works. All of Awlaki's major speeches can be obtained in a single click from "torrent" websites, which amalgamate lectures spread on servers around the world. For example, a would-be jihadist could obtain the vast majority of Awlaki's work from one download at islamictorrents.net. By storing the data on free servers and video websites like blip.tv and zshare.net, torrent users and Islamist forums guarantee a ready supply of cheap and easy access to radicalizing material.

Recognizing the availability of these speeches does little to stop their proliferation. From the fringes of the web to mainstream American websites, Awlaki's following has created an online jihadist legend. And while Western websites like Google and YouTube are working overtime to remove terrorist propaganda, the hydra of Awlaki's work is popping up all over the Net.

There must be a Balance in all things (Terrorists)

We must track down the web sites, that are being used by these people with disturbed minds,and do what your fathers of the past did in WW2. They form a team, that sent out messages, which had great effect.

Turn there web sits over to your advantage, and start to launch your own counter proper gander machine that will cause confusion to those vulnerable minds that are subject to brainwashing by the using of those that miss interpret and twist there religion to create murder and devastation to other law abiding peoples.

But we must take positive action,where ever they may be,hiding and lurking in the shadows and spewing out there hate and evilness.