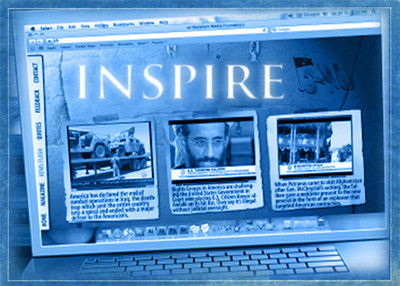 Al-Qaida makes a full press for Muslims in America and other Western nations to wage homegrown terrorist attacks in the second issue of its English-language magazine, offering grisly suggestions that "would cause chaos and trauma among the public."

The second edition of Inspire features articles by at least three American writers - cleric Anwar al-Awlaki, considered one of the movement's leading recruiters, al-Qaida spokesman Adam Gadahn and Samir Khan, who writes of his decision to leave North Carolina for Yemen to aid the cause.

But the most disturbing sections come from someone identified as Yahya Ibrahim. In separate articles, he suggests ideas for terrorist attacks and offers advice on how to wage jihad without generating scrutiny from law enforcement or intelligence agencies.

The graphic for the article "The Ultimate Mowing Machine" is taken from a Ford F-150 advertisement showing a truck splashing through puddles as lightning strikes in the background. With the right tools and a little effort, the truck can be turned into a killing machine from a Wes Craven horror film.

"The idea is to use a pickup truck as a mowing machine, not to mow grass but mow down the enemies of Allah," Ibrahim writes. "Maximum carnage" can be created by adding steel blades to the front grill of the truck and driving it at high speed into a crowd of pedestrians. The attacker can bring a gun to "finish off your work if your vehicle gets grounded during the attack."

Countries that support Israel or the wars in Iraq and Afghanistan can be targets. However, it's a suicide mission, so anyone carrying it out should be sure to leave behind a note explaining the motivation:

"You keep fighting until you achieve martyrdom. You start out your day in this world, and by the end of it, you are with Allah."

As outrageous as the idea seems, it's not that far removed from a 2006 attack at the University of North Carolina. An Iranian student named Mohammed Taheri-Azar injured nine people when he drove an SUV into a crowd of students leaving class. In a letter explaining his motivation, Taheri-Azar wrote that he had "no desire to amass the impermanent and temporary fame and material wealth this world has to offer."

That's the same message hammered home in the latest issue of Inspire, said Abdur-Rahman Mohamed, a convert to Islam who spent years believing and preaching the same radical ideology. After an epiphany, he now combats Islamist extremism.

The magazine preaches "sheer anarchy and mayhem," he said. The first stories, however, are an exercise in psychological programming, trying to make Muslims in the West feel guilt and angst for their comfortable lives and challenging their honor. If you don't wage jihad, the message goes, you're not a man.

"It's dripping through all the pages," Mohamed said.

It's dangerous because it is presented in such slick packaging. And with an online magazine, Mohamed notes, "there's nobody there to give a counter narrative to refute this stuff."

In a separate article, shooting sprees are suggested, with references to Fort Hood shooter Nidal Malik Hasan and Abdul Hakim Muhammad, who shot and killed an officer at a Little Rock Army recruiting office in June 2009. Crowded restaurants, including those that might cater to government employees, are prime targets which would generate media attention, it says.

But when it comes to grabbing attention, the "ultimate mowing machine" may have no equal:

"The 'terrorizing' element here is great. With blades welded to the truck and slashing out at the enemies of Allah at high speed, you can imagine the scene after such an operation!"

The second issue of Inspire may be even more sophisticated than the first. It mixes page appearances to include a faux newspaper layout, traditional articles and crisp graphics. The truck-assault image especially seems targeted toward young and impressionable readers with a video game like blood lust.

"The concern is that this magazine will reach kids who have never really been very interested in violent jihad before," a counterterrorism official knowledgeable about Samir Khan told National Public Radio Tuesday. "The magazine seems to make it fun and accessible. It used to be to get into this you needed to speak Arabic. Now you don't — English subtitles, English translations of extremist videos, that's the norm now."

The media arm of the Yemen-based al-Qaida faction that published Inspire, al-Melahim, has been on the front line in this quest to spread the jihadist message in the West. Many of the group's media releases are either originally produced in English, or feature English translations by a jihadist publishing house identified as Dar al Murabiteen Publications.

Other articles in Inspire's second issue are devoted to the rationale for jihad, and that's where the American voices are front and center. Gadahn is credited with an open-letter to President Barack Obama, which makes a blatant point of referring to the President by his first name. In it, Gadahn spells out the grievances the U.S. must satisfy for al-Qaida to cease its attacks. Among them, a complete withdrawal of U.S. forces from "every Muslim land from Afghanistan to Zanzibar," an end to support for Israel, and the elimination of any American influence – from the Peace Corps to media and educational programs – from the Muslim land. Finally, he demands the release of Muslim prisoners, even if they're guilty. That demand, Gadahn indicates, is as important as any other:

"Your refusal to release our prisoners or your failure to meet any of our other legitimate demands will mean the continuation of our just struggle against your tyranny, until God willing, you finally relent."

A list of prisoners at the end of the issue includes blind Sheikh Omar Abdul Rahman, convicted cop killer Jamil Al-Amin, failed Times Square bomber Faisal Shahzad and Ali al-Timimi, who is serving a life sentence for inspiring followers to go abroad and fight American forces in Afghanistan just after 9/11.

In the same vein, American-born cleric Anwar Al-Awlaki drafted a point-counterpoint style response to the March 2010 Mardin Declaration —a fatwa issued by global Islamic leaders in an attempt to undermine radical jihadist rhetoric. Among Awlaki's numerous refutations of the Declaration, he takes particular issue with the assertion that Muslims are bound by international laws and civil treaties:

"The international community they [the Mardin Conference participants] respect so much was born at the funeral of the last Islamic Khilāfah. The Western powers came into domination after they exterminated the Ottoman Khilāfah and divided it amongst themselves into zones of influence. They destroyed the Khilāfah, established control over the international community and then came up with these treaties; and we were not there at the table, we had no representation whatsoever, we were completely and utterly ignored in the decision making process on the world stage. We were not even present at the signing ceremonies. So why are we bound to those treaties?"

To Awlaki, Muslims in the West should and must wage violent jihad to topple the non-believers—contrary to what the declaration asserts. In the short time since Inspire's release, this feature has already spread rapidly on jihadist forums, separate from the publication itself.

In an article appearing later in the magazine entitled, "I am Proud to be a Traitor to America," Samir Khan writes an autobiographical account of his decision to leave the U.S. In it, he described his open criticism of American action in the Muslim world and the law enforcement attention he generated. But nothing happened beyond a little extra attention in airport security lines:

"It still surprises me when I reflect on it; I mean, I was quiet (sic) open about my beliefs online and it didn't take a rocket scientist to figure out that I was al Qaeda to the core.

That proved to my soul that if Allah wants to protect you, no one has the power on earth to harm you. I was to learn that lesson continually in close encounters with death later on."

His chosen path will be difficult, he wrote, but he knows "that body parts have to be torn apart, skulls have to be crushed and blood has to be spilled in order for this to be a reality."

In a direct appeal for homegrown terrorists, an essay in a font that looks handwritten urges people who want to wage jihad not to travel abroad. They'd be welcome in the ranks of foreign terrorists, the essay says, but a return home is preferable:

"Put yourself in the shoes of the leadership for a moment. They have with them an individual who is not wanted by the intelligence services and they could use that person to further the Islamic cause. That person is you. I strongly recommend all the brothers and sisters coming from the West to consider attacking the West in its own backyard. The effect is much greater, it always embarrasses the enemy, and these types of individual attacks are nearly impossible for them to contain."

That message is reinforced in another article by Yahya Ibrahim, "Tips for our Brothers in the United Snakes of America." This item focuses on how to plot attacks without being detected. Avoid visiting jihadist websites, it advises, suggesting anti-terror sites which monitor extremist outlets. Watch out for informants, don't travel overseas overtly, it advises. It's better "to fight jihad on U.S. soil. In fact even if traveling to join the fronts of jihad was accessible and easy, we would still encourage them to perform operations in the West. To kill a snake, strike its head."