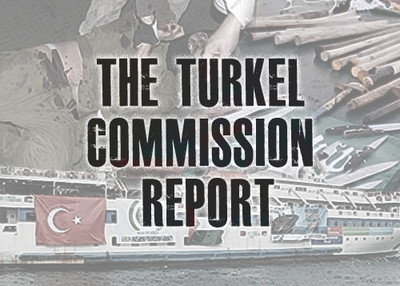 Interviews, audio and video tapes – including from the ship's own closed-circuit cameras – prove that Israeli commandos acted in self defense when they stormed a ship trying to defy Israel's blockade on Gaza, an investigation has found.

The Turkel Commission report issued Sunday also found that the blockade "was lawful and complied with the rules of international law, in view of the security circumstances and Israel's efforts to fulfill its humanitarian obligations."

Six ships were part of a flotilla last May 31, organized by a coalition of international organizations opposed to the blockade, including the Islamist Turkish organization IHH, the Free Gaza Movement and the European Campaign to End the Siege on Gaza.

The Israeli navy issued a series of warnings to the ships that they would be stopped if they did not turn away. After a security inspection, humanitarian cargo on the ships would be sent to Gaza via its land crossings. Only one ship, the Mavi Marmara, ignored the warnings. Its captain responded via radio that he would not stop. At that point, "some IHH activists remained on the upper decks and began sawing chains and other gear made of metal, as well as to gather axes, knives, hammers, work tools, bolts and glass found on the ship," the report said.

It then described how Israeli commandos were attacked trying to board the Mavi Marmara.

Israeli Defense Forces (IDF) soldiers said they expected civil disobedience, not violence, from the passengers. After attempts to board from speedboats failed, 15 soldiers were sent rappelling down ropes from a helicopter to the ship's deck. Each soldier was attacked immediately upon landing; two soldiers were shot – one in the abdomen and one in the knee.

"Before I managed to touch my feet to the deck, about ten people jumped onto me and began brutally beating me from every direction, using clubs, metal rods and fists…[A]t this stage I was not armed…I truly felt that I was about to die, way beyond what we define as life-threatening. The behavior of the people at this stage was definitely like fighters of an enemy which has come to kill the other side, that is, me," one soldier told the commission.

Another soldier described two groups of people on board - "the one which tried to kill us and was just waiting for the moment when they would succeed. There was another group there which tried to calm things down, and they were actually the ones who prevented the extreme group from killing us."

These findings echo previous reports, including an internal Israeli military report from July, which concluded that the killing of the nine Turks by the Israeli commandos was justified, although "mistakes" were made by Israel in its intelligence gathering prior to the incident.

The Turkel Commission review was commissioned by the government. Its report was based on written and oral testimony from IDF personnel; thousands of video and audio clips, including security cameras from the Mavi Marmara; internal investigations carried out within the IDF and police records from their questioning of flotilla participants and materials seized from the ship.

The Meir Amit Intelligence and Terrorism Information Center (ITIC) has documented the nature of the resistance encountered by the commandos since the incident. A group of approximately 40 IHH extremist operatives and their accomplices were prepared and organized to violently fight the Israelis by IHH head Bulent Yildirim, who maintains close ties with Hamas and meets with its leaders. Yildirim and other Islamists on the Mavi Marmara offered ideological and religious indoctrination to the hard core IHH operatives during the voyage.

The report was immediately dismissed by flotilla activists and Turkish government officials. "With this so-called report, this report created on orders, with this disinformation," Yildirim said, "they [Israel] have, in a way, agreed that they are guilty."

"How can a report ordered and prepared in the same country [Israel] have any value?" asked Turkish Prime Minister Recep Erdogan. "We will follow this affair. This report has no credibility."

But two foreign observers insisted it did. In an open letter, former Northern Ireland First Minister David Trimble and Canadian Brigadier General Kenneth Watkin praised the investigation's thoroughness and said they had "no doubt" of its independence.

"We are glad that the Commission made repeated efforts to hear both sides, extending to making arrangement for evidence to be given by video conferencing and offering to take evidence in a neutral location. We regret that these offers were not taken up," they wrote. "But we would like to express our appreciation of the Israeli Arabs, who were on the Mavi Marmara and who gave evidence to us. "

While the five other ships of the flotilla carried aid, no humanitarian supplies were found on board the Mavi Marmara, according to the report. Rather, the motivation behind many of the IHH activists was simply to confront Israel violently. ITIC released a report stating that seven out of the nine Turks who were killed had declared their desire to become martyrs. Nonetheless, following the incident, Israel dramatically increased the amount and types of goods allowed to enter the Gaza Strip.

Erdogan's response may be connected to his government's true depth of support for the IHH plan. According to a Jerusalem Post article, a forthcoming ITIC report includes a transcript from a meeting held two weeks before the Mavi Marmara sailed in which a senior IHH official said the group had recently won "direct support from PM and other ministers."

The ITIC report claims that without IHH's support, Erdogan "would not have been elected prime minister."

IHH, which is banned in Israel and is under investigation by the U.S. for its terrorist ties, is organizing a second flotilla, planned to reach Gaza on May 31st, the one-year anniversary of the confrontation. IHH is working with the same organizations as it did in 2010, as well as new coalitions from the United States.