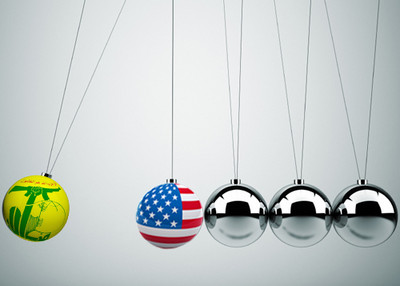 For weeks, leaders of the Lebanese-based terrorist group Hizballah have been waging an international extortion campaign. Blood will flow, they promise, if a United Nations tribunal indicts any of its members in connection with the 2005 assassination of former Lebanese Prime Minister Rafik Hariri.

"What we do know," Hizballah's No. 2 man, Sheikh Naim Qassem told the BBC earlier this month, "is that such an indictment is a warning bell equivalent to lighting the fuse, to igniting the wick for an explosion, and is dangerous for Lebanon."

Earlier, Hizballah leader Hassan Nasrallah dismissed the investigation as a tool of the United States and Israel and warned that his organization views cooperation with the tribunal as "an assault on the resistance."

The tribunal may conclude its work by the end of the year, with as many as six Hizballah officials facing indictment, the Wall Street Journal reports.

Other reports indicate Hizballah and its allies have detailed plans to seize control of Beirut if the indictments are issued. State Department spokesman P.J. Crowley has criticized Hizballah for its "attempt to create a false choice between justice and stability."

While Iran is believed to be its most significant patron, Hizballah has an array of supporters within the United States. Some provide political/propaganda support while others engage in an array of criminal activity, directing the proceeds back to Lebanon.

Whether any of those supporters are willing to do more – and carry out violence for Hizballah – is something that worries counter-terror officials who can't say for certain how likely such a development might be.

In February, the Director of National Intelligence issued an unclassified report to Congress that noted Hizballah has not attacked U.S. interests in more than a decade. "However," then-DNI Dennis Blair said, "[W]e cannot rule out that the group would attack if it perceives that the United States is threatening its core interests.… Hizballah is the largest recipient of Iranian financial aid, training, and weaponry, and Iran's senior leadership has cited Hizballah as a model for other militant groups."

The Investigative Project on Terrorism examines Hizballah support in the United States with a three-part series, beginning with a look at just how long it has been here.

(Part one of three) The indictment reads like a couple of grifters who finally ran out of luck. They talked of selling Oxycontin, of faking an automobile accident, and of using "Lebanese lightning" - arson - for insurance fraud all in hopes of scoring fast cash. But Hor and Amera Akl weren't simply trying to get rich, federal investigators say.

In secret recordings with an FBI informant, the Toledo, Ohio, couple discussed how their crimes would benefit the terrorist group Hizballah. They'd smuggle hundreds of thousands of dollars in cash to Lebanon. Some of the money could buy pickup trucks Hizballah could use to fire rockets at Israel. They claimed to have high-level contacts in the terrorist group.

They'd keep a percentage as a commission, their June indictment says.

Just a few months earlier and more than 1,300 miles away, authorities arrested three Miami-area men in connection with an alleged conspiracy to export electronics items including cameras and video game consoles to a mall in Paraguay in a scheme to benefit Hizballah. The U.S. Treasury Department designated the Galeria Page shopping center in 2006, saying it served as "the central headquarters for Hizballah members in the TBA [Tri-Border Area]."

It is owned and operated by Hizballah members, who pay "a regular quota to Hizballah based on profits" generated at the shopping center.

While these prosecutions are new, American-based criminal activity benefitting Hizballah dates back at least to the early 1990s, records show.

Credit card and insurance fraud, drug trafficking and counterfeiting are criminal activities involving Hizballah members that were highlighted in a 1994 FBI Intelligence report obtained by the Investigative Project on Terrorism via the Freedom of Information Act. In language that tracks closely with allegations in the Akl case, the report said the motivation seems to be a mix of personal gain while "an unknown percentage of the profits is specified for Hizballah coffers."

More than a dozen cases of Hizballah support – from relatively small-scale criminal enterprises to attempts to supply the terrorist group with equipment and satellite technology – have been generated since then.

In recent years, however, there is a developing concern that Hizballah operations in the hemisphere may shift from financial support to operational activity. And to do that, terrorists are tapping into narco-trafficking networks in South America's tri-border region of Brazil, Argentina, and Paraguay. It is mostly speculative, but the concerns rise with increasing tensions over Iran's nuclear weapons program, fears of another possible war between Israel and Hizballah and expectations the United Nations will implicate Hizballah in the 2005 bombing attack that killed former Lebanese Prime Minister Rafik Hariri.

The big question mark for us has always been not their capability but their intent. Currently, we do not assess there to be a clear intent to attack the United States, but should that intent change, they undoubtedly have the capability to launch attacks against the U.S. and the West on a relatively global scale."

Brown asked "if there's an escalation between Iran and Israel that we will see more of a threat here in the United States?"

It's not clear that relevant agencies are as concerned. Rep. Sue Myrick, R-NC, has asked the Department of Homeland Security to create a task force to investigate possible Hizballah activity along the U.S.-Mexican border and the possibility that terrorists could be smuggled into the country through alliances with drug traffickers. Homeland Security officials have dismissed the issue, saying "DHS does not have any credible information on terrorist groups operating along the Southwest border."

But in his award-winning 2008 series "Breaching America," published in the San Antonio Express-News, journalist Todd Bensman detailed examples of terrorists who have crossed into the United States from Mexico. He quoted testimony and a statement to reporters by FBI Director Robert Mueller, who cited "indications that leaders of other terrorist groups may be contemplating ...having persons come across assuming identities of others, and trying to get across the border. It is intelligence that indicates there have been discussions on that."

Another official who spoke publicly about the issue, Adm. James Stavridis, then the commander of U.S. Southern Command, told the Senate Armed Services Committee in March 2009 that there is "a direct connection between Hizballah activity and the narco-trafficking activity."

In July, the Kuwaiti newspaper, al-Seyassa, reported that Mexican authorities arrested Jameel Nasr earlier this summer. The newspaper cited Mexican authorities as saying that Nasr took instruction from Hizballah leaders in Lebanon and had been "entrusted with forming a base in South American and the United States to carry out operations against Israeli and Western targets."

Officials today shouldn't be so quick to dismiss the notion that Hizballah might use that base to expand its American operations, said Michael Braun, who retired from the Drug Enforcement Agency as its operations chief in 2008.

The group makes millions of dollars smuggling drugs from the Tri-Border Area to Europe and the Middle East. "They are masters at identifying and exploiting existing global smuggling infrastructures for whatever it is they want to do," Braun said. "They've successfully developed the global contacts to get virtually anything done or anything moved."

It's all part of what he calls the "currency of contraband."

"Corporate Hizballah" has created alliances with drug cartels throughout the region. Those partnerships don't have to be limited.

"It's not just drugs," Braun said, who advises the U.S. Department of Defense. "It's tens of millions of dollars you're talking about. You can't just walk past it. This is the money that is allowing these guys you're trying to kill to live and breathe and grow."

If Hizballah does choose to target the United States, those alliances can be easily exploited.

"I am more concerned about the guys who, when asked by corporate – 'we need you to move a satchel' – those are the guys" Braun said. "They've got the ability to do it."

Law enforcement records show Hizballah members have lived and operated in the United States for years.

In a separate FBI report, also obtained via the Freedom of Information Act, an FBI supervisor responsible for Hizballah-related investigations [whose name was redacted] in 1997 summarized some of the investigations at that time. Hizballah members in the U.S. "raised and collected hundreds of thousands of dollars which were sent to support Hizballah activities in Lebanon."

Foreign intelligence surveillance wiretaps from that period show those members "receive directions for their terrorist activities in the United States from leaders of HIzballah who reside outside the United States."

Some Islamist organizations considered mainstream have trouble accepting Hizballah's designation as a terrorist group. In 2000, Abdurrahman Alamoudi, then one of the nation's most influential Islamist political operatives, defiantly expressed support for Hizballah in a rally across the street from the White House. Mahdi Bray, executive director of the Muslim American Society's (MAS) Freedom Foundation, shared the stage with Alamoudi and raised his fist in agreement.

Officials at the Council on American-Islamic Relations (CAIR) have refused to label Hizballah as a terrorist group. Instead, they focus on the group's success in Lebanese electoral campaigns and cast it as "part of their democratic governments."

The 2009 national convention for the Islamic Society of North America (ISNA) featured a panel that portrayed Hizballah as the passive victim of an Israeli onslaught during the 2006 war. There was "no reason why Hizballah should not remain armed," author Cathy Sultan said.

Gauging the depth and nature of Hizballah activity here is challenging, said Bill Kowalski, former assistant special agent in charge of the FBI's Detroit field office. That field office has handled numerous Hizballah-related financial crimes. His telephone often rang with calls from agents in other districts, Kowalski said, seeking information about Michigan connections with Hizballah-linked suspects throughout the country.

"Clearly they are not as violent against the U.S. in the U.S, as some other groups, but historically they have negatively impacted U.S. interests as severely as any other terror organization save for al-Qaida," Kowalski said. "There remains in CONUS [the continental United States] a large cadre of individuals who view Hizballah as legitimate or semi-legitimate and have difficulty dealing with US intelligence or law enforcement who characterize the group harshly as a terror group."

In subsequent reports, the Investigative Project on Terrorism will delve more deeply into some of the prosecutions fueling Hizballah terror and into the overt nature of domestic support for the group.

At the beginning of the article it says: Sue Myrick, R-NC, has asked the Department of Homeland Security to create a task force to investigate possible Hizballah activity along the U.S.-Mexican border and the possibility that terrorists could be smuggled into the country through alliances with drug traffickers.

And then it says they can move anything from anywhere to anywhere. What is there to investigate? Alcohol and tobacco kill how many Americans every single day? Who are the real terrorist?