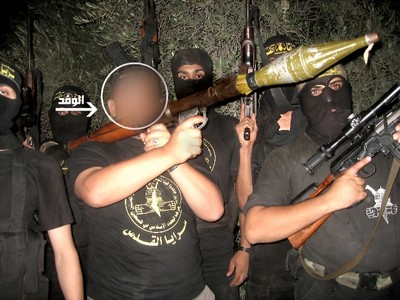 Algerian and Turkish members of a Viva Palestina (VP) convoy that brought aid to the Gaza government run by the terrorist group Hamas also met with another radical organization previously not publicly linked to VP – the Palestinian Islamic Jihad.

An Investigative Project on Terrorism investigation uncovered the Algerian visit, while the Turkish meeting was first reported by the Israeli media outlet Ynetnews on Monday.

PIJ, an Iranian-inspired terrorist group, seeks to destroy Israel and replace it with an Islamic State by carrying out jihad, like Hamas. The terrorist group is responsible for carrying out dozens of suicide bombings in Israel, one which killed 20 civilians, including two Americans, in 1996. PIJ was first officially named a terrorist group by the United States following a 1995 executive order by President Bill Clinton. The group has received support from individuals living in the United States. Most notable is Sami Al-Arian, a former University of South Florida professor who served on the PIJ governing board while living in Tampa. He pled guilty in to conspiring to provide goods and services to PIJ in 2006.

Four Algerians on the Viva Palestina 5 convoy "praised God greatly" after they heard that they would be able to visit members of the Brigades. Upon entering an Al Quds Brigades' military post on a northwest road in Gaza, "the Algerians did not wait for the van to stop before they jumped from it to prostrate themselves to God Almighty in thanks that they were able to see the Gaza Mujahidin and shake hands with them." The Algerians planned "to kiss their feet," but instead, the terrorist operatives said, "'Your coming to Gaza to help us is a Jihad itself'" [Emphasis added].

One Algerian, who participated in the May flotilla to Gaza that ended in a deadly clash with Israeli soldiers, said, "I was on the last Freedom Flotilla on board the ship, and the cowards [Israelis] attacked us. I sought martyrdom and many of us were hit. The Zionists took us to the port of Ashdod" [Emphasis added].

The Al-Quds Brigades terrorists also took the Algerian delegation to buildings where the Israeli army had been located. One Algerian shouted, "Where are they? I want to kill them! They killed my Palestinian brothers." Before the delegation left, "they held Kalashnikovs and began to kiss them and raise them high repeating, 'By this we shall triumph. By this we shall liberate our al Aqsa'" [Emphasis added].

According to the article, this meeting was not the first time Gaza aid convoys have met with PIJ or other terrorist groups: "Arab and foreign men-in-solidarity who came to Gaza on board ships and in siege breaking convoys had previously met with men of the Resistance in their various groups."

"You are the pride and glory of the Umma. Upon you we rely to confront the criminal Zionist entity whose aggression against the Palestinian has not stopped," and "I am very proud to stand among dear brothers, Mujahidin, heroes, who risk their lives; proceed in the Way of God; have before their eyes the cause of their Ummah and people; sacrifice much; and expend blood for the sake of liberation and independence and to restore their plundered rights" [Emphasis added].

Pictures of two Turkish men, with their faces blurred, were posted on the Al Quds Brigades' website. One man put on the Brigades' uniform, and posed with PIJ terrorists while holding weapons and rocket launchers. The photos were removed shortly after they were posted. 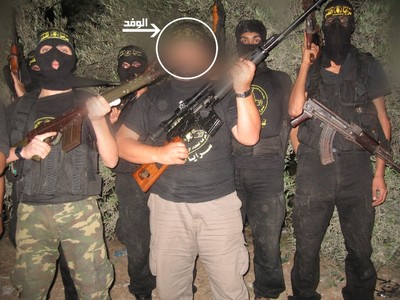 By meeting with terrorists, the Viva Palestina convoys to Gaza are condoning terrorism and elevating the status of the Hamas regime in the Gaza Strip, rather than delivering aid to needy Palestinians. Hamas official Fathi Hamad, the interior minister in Gaza, articulated this concept when stating this week:

"We are coming to occupy Haifa and Akko. We'll have armies from all around the world, and the convoys arriving in Gaza are carrying a message to our people, saying that we must stick to the path of jihad. The enemy is trying to impose a siege on us, but they are the ones under a siege and behind fences" [Emphasis added].

At a sermon delivered on October 22nd to the convoy at a mosque, Haniyeh said the arrival of the group was a step towards "the liberation of Jerusalem and Al-Aqsa mosque, the restoration of the territories of Palestine and the lifting of the siege of the Gaza Strip." He also echoed Hamas' charter dedicated to destroying the Jewish State of Israel and replacing it with an Islamic state when saying that "Palestine" (all areas of Israel proper) would remain Palestinian, Arab and Muslim, according to a report released Thursday by the Meir Amit Intelligence and Terrorism Information Center.

Convoy spokesperson and Hamas operative living in the UK, Zaher Birawi, delivered a speech as well, after which those present at the mosque shouted "We will redeem you Al-Aqsa with our lives and blood" [Emphasis added].

At a ceremony held later that day, the convoy and its leaders were honored by Ismail Haniyeh and other senior Hamas leaders. The next day, they visited the graves of Hamas leaders Sheik Ahmed Yassin, Abdel Aziz Rantisi and Sayid Siyyam, where they mixed the soil of their graves with those of Turkish activists killed abroad the IHH Mavi Marmara ship that was part of the May flotilla. IHH operatives on the ship deliberately orchestrated the violent confrontation with Israel in the Mediterranean Sea.

Yassin and Rantisi were designated as Specially Designated Global Terrorists by the U.S. Department of Treasury in 2003. Yassin, the founding leader of Hamas, was assassinated by the Israeli army in 2004. He personally encouraged and approved the operation of three of the most deadly suicide bombings in Israel and the death of hundreds of Israeli citizens.

At a seminar in Beirut on Tuesday, VP founder and leader George Galloway said that Viva Palestina 5 had achieved great success. Convoy leader Kevin Ovenden announced at a press conference before leaving the Gaza Strip that Viva Palestina plans to organize its sixth "aid" convoy to Gaza with the participation of more international institutions, as well as participate in future sea convoys to Gaza.

Please capture those photos and blogs and save them. When are people going to wake up and realize that they're being played for fools by Hamas, Syria, Iran and their Islamist allies? There will never be any peace in the middle east and the Palestinians and Israelis will never be free until the world accepts the fact that it is the Muslim fundamentalists that do not want peace until Israel is gone.