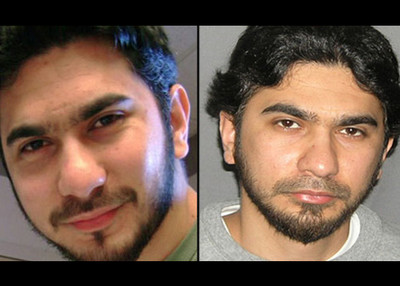 Alleged Times Square car bomber Faisal Shahzad made his first court appearance Tuesday evening since his arrest on May 3. While federal prosecutors used the opportunity to confirm some earlier reports regarding the investigation, new details continue to emerge about the failed terrorist attack.

During the 10-minute hearing at the federal courthouse in Manhattan, prosecutors confirmed what has already been widely reported. Shahzad waived his right to a speedy court appearance and to an attorney, and explained that he has been cooperating with law enforcement officials.

The judge also reviewed the charges that have been filed against Shahzad—attempted use of a weapon of mass destruction, using a destructive device in connection with an attempted crime of violence, transporting explosives, and attempting to destroy property with fire and explosives. If convicted, as the court explained, Shahzad could face up to life in prison.

While Shahzad's case is making its way through the judicial system, law enforcement officials continue to investigate the plot. The ongoing investigation has revealed new information regarding potential co-conspirators, motives for the attack, and the possibility that other follow-up plots are being hatched.

Since Shahzad's arrest two weeks ago, there has been a flurry of reporting about the international scope of the investigation. Although it would be a few days before Attorney General Eric Holder would confirm that the attack was underwritten by the Pakistani Taliban, law enforcement officials in the United States and Pakistan had announced the arrests of a dozen individuals in connection with the plot within days of its failure.

The scope of the plot widened this week, however, with the announcement that a former Pakistani Army Major, identified only by the name Adnan, had been arrested due to possible connections with the failed attempt in New York. These arrests suggest a potentially vast support structure in at least two countries.

Counter-terror analysts say Shahzad's case shows the Pakistani Taliban was successful getting an operative inside the United States, and likely has others who may be plotting new attacks.

"The Taliban doesn't need to come and say this is what we want to do. They've already proved they have the capability," former Shin Bet official Offer Baruch told WTOP radio in Washington. "The guy [Shahzad] was here. It doesn't matter how immature it [his plot] was. They already have a cell here on American soil."

While his motives remain largely a mystery, CNN has begun reporting on emails obtained by the news agency which purportedly detail Shahzad's grievances against the United States and the West.

In one, Shahzad laments the occupation of Muslim lands by what he describes as "foreign infidel sources." Shahzad directs much of his anger at the United States. He paints the American democratic system as "human made laws" that ought to defer to "given laws revealed from Allah."

Shahzad calls for moderate Muslims, both in the United States and across the world, to replace their logic with "trust in Allah." This, he says, will enable them to overcome overwhelming odds and topple the West.

Shahzad's wrote the second email in April 2009, by which time he had been naturalized as an American citizen. He appears to have grown more extreme in his views in the three years since the first message. Shahzad goes as far as to say that "defending the [Muslim] lands" requires much more than dialogue. This implicit reference to violent resistance would soon manifest itself in the form of Shahzad's failed terrorist plot.

The New York Daily News reported that Shahzad was plotting follow-up terror attacks on Grand Central Terminal and lower Manhattan's financial district. "If Times Square was successful, he was coming back for more." Among the targets reportedly considered were:

While the investigation into the failed Times Square bombing will continue, Shahzad's case will work its way through the judicial system. After reminding Shahzad of his rights under Miranda, the judge appointed Julia Gatta of the federal public defender service, to represent the defendant. Shahzad is set to make another appearance in court on June 1.