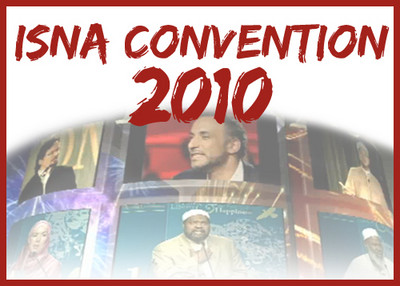 In 2009, a panel of authors bandied about support for Hizballah and anti-Semitic conspiracy theories that cast Jews as controlling the world and interpreted the Holocaust as punishment for their sins. The speeches were more subtle this year, but included support for Hamas and repeatedly lamented what they saw as Israel's power to dictate policy to America.

During a Saturday evening session, Rashad Hussain read a letter from President Obama welcoming the convention to his hometown of Chicago and praising ISNA for gathering thousands of people. "Outside of the hajj," or pilgrimage to Mecca, the President wrote, "this convention constitutes one of the most diverse gatherings of Muslim people in the world, and that is a testament to the diversity and dynamism of Muslim communities right here in America."

Hussain is the White House envoy to the Organization of the Islamic Conference, comprised of 57 Muslim nations. To his credit, he challenged the convention to combat radicalization among Muslim youth and rebutted those who excuse terrorism abroad as a response to U.S. foreign policy decisions. Most victims of terrorist attacks in Pakistan, Afghanistan and other hotspots are Muslims, he noted:

"That a Muslim is going into a masjid [mosque] in Pakistan and killing so many other Muslims, that 80 to 90 percent of the people that are victims of violent extremism are Muslims. Why is it? If there is a complaint against the foreign policy of this country, why are they killing Muslims? Is that the answer to that grievance or any other grievance? The fact of the matter is there is absolutely no justification whatsoever for killing innocent people. That's clear in our faith. And if someone has done something wrong to you, to go out and indiscriminately kill someone who had nothing to do with that action must be wholeheartedly rejected."

Hussain's message, however, was at odds with that of other convention speakers—and it was on Palestinian-Israeli issues that conference sessions skewed most heavily. In panels on humanitarian aid for Gaza and interfaith support for Palestine, Israeli policy was accused of being the sole cause of the conflict solely to blame. No speaker called on Hamas to tear up its covenant, which invokes the anti-Semitic forgery of The Protocols of the Elders of Zion and calls for Israel's destruction. No one urged the group to release Gilad Shalit, whom Hamas kidnapped and has held captive since 2006, forbidding any visit from outside monitors, such as the International Red Cross.

In a panel hosted by American Muslims for Palestine (AMP), attorney Othman Atta referred to Shalit— who was abducted by Hamas gunmen who crossed into Israel— as "the Israeli terrorist who was part of enforcing the siege on Gaza."

In a program on interfaith activism, University of California-Berkeley Professor Hatem Bazian ran through a litany of arguments why America's "one-sided support for Israel" is counterproductive. It costs jobs, he argued without citing any data, because people opposed to American policy are buying goods from Europe and China. Backing off support for Israel, therefore, can be economically stimulating, he claimed.

In addition, withholding support for Israel would drain the pool of prospective terrorists, Bazian asserted. "If you want a poster recruitment for terrorism, I will give you evidence," he said. "When Israel attack [sic] on Lebanon just increased people who were ready to join terrorism because they see that the one-sided U.S. policy is failing them and therefore they feel that militarization and going through terrorism is the only option."

In another session, panelist Paul Larudee called the Palestinian issue the most important to resolve; arguing that while "people are constantly talking about terrorism," the Palestinian issue "is at the bottom of many of the problems that our community is facing. It's at the root of the problems we are facing in Iraq, in Afghanistan, in Yemen and in the United States."

Larudee has participated in a number of aid flotillas to Gaza, including the recent effort that ended violently in late May.

In a similar display of anti-Israeli bias and misrepresentation, Edward Peck—another flotilla participant—referenced recent allegations that General David Petraeus said America's relationship with Israel was jeopardizing U.S. troops. Peck embraced the claim and accused the media of covering it up:

"The point here is that General Petraeus, who has just been elevated to semi-sainthood by the American press, has for the first time publicly said that our relationship with Israel is costing American lives and blood. Now I know, as you do, that it's cost the stature and respect, credibility, honesty and dignity. But we now have a general says it's costing us lives. And you saw the reaction of the American people. No you didn't as a matter of fact, because it hasn't yet penetrated for the reasons that you mentioned, so the media won't touch it, won't really play it like it should, which is one of the obstacles we're gonna have to come over."

True to the narrative that the convention organizers sought to push, Peck repeatedly cast American policy toward the conflict as dictated by Israel. "As long as the United States is owned by Israel militarily, economically and politically, Israel can do whatever it wants without fear, without contradiction."

The U.S. considers Hamas to be a terrorist group and will not communicate with it until it renounces terrorism and agrees to peaceful negotiations. Yet, when asked when the U.S. might talk with Hamas, Peck said, "when Israel gives us permission."

More than simply calling for negotiation with an organization the United States has classified a terrorist group for its repeated attacks on not only Israelis, but on Palestinians and Americans, Peck lauded Hamas political leader Khalid Meshaal as "a very highly educated, very articulate, very reasonable individual," and mocked the notion that Hamas should recognize Israel's right to exist. Paraphrasing Meshaal, Peck said "recognition is a reciprocal act" and that Israel's borders in a prospective peace agreement are unknown, so "it's ridiculous to ask us to recognize a state which we do not know where it is."

Picking up the theme that one side is the root of all the conflict, another flotilla veteran provided a detailed account of what she said took place on the Mavi Marmara, the vessel on which activists attacked Israeli soldiers. Fatima Mohammadi's version repeatedly conflicts with video and other evidence available to the public.

Mohammedi, former Viva Palestina USA National Organizer, claimed passengers on the ship did not attack Israeli commandos first, "that we were not resisting, that we were sitting down," and that the raid came without warning.

Here is video of Israeli military officials warning the ship to break off its course or face seizure. After flotilla participants failed to heed the warning, video evidence showed flotilla passengers attacking commandos with weapons as they landed on the ship.

Though many passengers openly spoke of their desires to become martyrs trying to reach Gaza, she called it a myth that flotilla organizers planned violence. She also denied that weapons were smuggled on board, saying knives later displayed by Israeli officials were mere "kitchen knives. Every ship has kitchen knives, because there are kitchens."

Though Hamas was never mentioned, the speakers made it clear they were not impressed by the Palestinian Authority's efforts or desire to negotiate peace. Economic and social progress in the West Bank, something widely hailed as building the foundation of a Palestinian state, was dismissed by Larudee and moderator Hatem Bazian as a sham. The "trappings of statehood" are an obstacle to an actual state, Larudee said. The best thing the Palestinian Authority can do for the cause is to dissolve itself:

That point was echoed by Bazian, founder and chairman of American Muslims for Palestine, who charged that Israel hopes to distract Palestinians from seeking statehood by building "a golden cage."

ISNA officials determine what panels are presented and thereby, the organization is responsible for what is said in them. In grand speeches before the entire convention, Rashad Hussain and outgoing ISNA President Ingrid Mattson took on a myopic viewpoint about terrorism. It is not, they argued, all about opposition to U.S. policy. Yet in the breakout sessions, conventioneers heard the complete opposite. And as such, ISNA is as responsible for these sessions as if its own officials made the pronouncements.