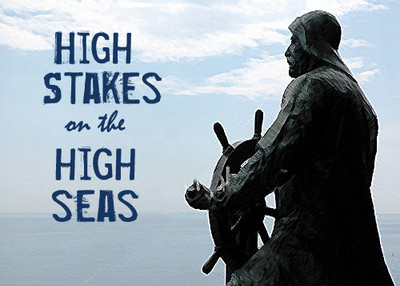 **UPDATED 5/28/10: For recent developments about the flotilla, please refer to the blog.

Israeli officials are tight-lipped about their plans to stop 750 activists who are approaching Gaza with boat loads of supplies in violation of an embargo on the Hamas government. The activists are on nine ships carrying approximately 10,000 tons of aid. Israeli officials have said they intend to cut off the "Freedom Flotilla," before it docks.

The flotilla represents a coalition of international groups, including some from Viva Palestina (VP), which has led three previous aid convoys to Gaza. Its last venture ended with violent clashes on the Egyptian border, resulting in Hamas militants killing an Egyptian police officer. Egypt subsequently cut off land access to Gaza for the convoy.

The flotilla, which hopes to arrive by week's end, carries cement, iron, generators, prefabricated homes, and building and construction materials, in addition to medical equipment and educational supplies. Israel typically does not allow building materials to enter Gaza because "those kinds of materials, instead of making houses for people, are used for building bunkers and reinforcing the armed capacity of Hamas and also construction tunnels for smuggling weapons," according to Amit Zarouk, a spokesperson at the Israeli Embassy in Ankara.

With the backing of the Turkish government, three ships of the flotilla sailed from Turkey on Saturday bearing the country's flag during a send off ceremony with thousands of supporters. Turkish Prime Minister Recep Tayyip Erdoğan expressed support for the flotilla and requested that Israel allow it to reach Gaza.

Organizations leading the flotilla, including the Free Gaza Movement (FGM) and IHH, the International Humanitarian Relief Foundation, a Turkish-based charity, call it "the biggest internationally coordinated effort to directly challenge Israeli's ongoing occupation, aggression, and violence against the Palestinian people." Other organizers include a London-based group comprised of European NGOs, and organizations based in Greece and Sweden.

The organizations have made it clear that their intention is political: their primary goal includes "break[ing] the siege of Gaza." Israel has invited the organizations to use its land crossings to deliver aid, as all other groups delivering aid to Gaza do, yet the flotilla organizers insist "We have not and will not ask for Israel's permission."

Viva Palestina partnered with IHH during its last convoy, and declared that it is "very proud to announce their involvement with IHH again on this flotilla." VP chief George Galloway, recently voted out of Parliament in the British elections, repeatedly praised IHH during speeches in the U.S. in late January and early February.

Founded in the 1990s, IHH was banned by Israel in 2008 for being "part of Hamas's fundraising network." Other investigations have linked the groups to extremists and jihadists. In the mid 1990s, IHH President Bulent Yildrim aimed to "'recruit veteran soldiers in anticipation of the coming holy war [jihad], according to French intelligence expert Jean Louis-Bruguiere, "In particular, some men were sent into war zones in Muslim countries in order to acquire combat experience.'" U.S. court documents cite Louis-Bruguiere saying that IHH played "[a]n important role" in the Millennium bomb plot.

Hamas officials openly made preparations in anticipation of the flotilla's arrival. That includes repairing the Gaza port and dredging its basin so the mid-sized ships can navigate it, Hamas' minister of communications and information technology, Yusuf al-Mansi, said last month. An IHH official said his organization is overseeing the port repairs.

On Tuesday, a Gaza official announced that "preparations on the Palestinian side have been finished at all levels."

Viva Palestina has taken a fairly low profile in the flotilla. Groups and individuals involved with VP, however, have created their own personal initiatives to participate and raise funds for the flotilla.

Former VP participant Laura Stuart launched the "Gaza Boat Convoy" group based in the UK. In an interview with Iran's Press TV, Stuart stated that Viva Palestina is working with IHH on the flotilla. Money raised by the Gaza Boat Convoy are transferred to IHH.

"Team Palestina," also a UK based entity created by a former VP participant, reported that the organization raised £5,200 for IHH at its first fundraiser held in Bradford.

Viva Palestina briefly advertised its participation in the flotilla on the official Viva Palestina UK website in late April, saying that "[b]y taking part in this flotilla, Viva Palestina will be bringing much needed humanitarian aid, and attempting to break the siege once more." VP officials stated that they will be purchasing supplies for the flotilla in Turkey, requested donations, and also noted that a "Viva Palestina Flotilla" group was created on Facebook.

Irish activist Caoimhe Butterly, who participated in past Viva Palestina convoys, is one of the lead players in the flotilla, as an Irish representative of FGM. During an interview with Hizballah's Al-Manar TV, Butterly was asked to convey a message to the people of Gaza and the rest of the world:

"…What we are struggling for, hand in hand, with Palestinian brothers, sisters and comrades, is for the liberation of Palestine, is for the right of return, for all of the exiled refugees in diaspora and the release of over 11,000 Palestinian political prisoners."

"The next time the confrontation will be directly with the Zionist enemy itself on the high seas," Sawalha said. He formerly ran Hamas operations in the West Bank and Gaza before leaving for Britain. In London, he is the president of the British Muslim Initiative (BMI), a group dominated by members of the Muslim Brotherhood in the UK.

IHH's website refers to Sawalha as the person "who coordinates the campaign in Europe."

A British delegation of Viva Palestina UK activists, led by Galloway aide Kevin Ovenden, attended the send off rally for the second ship in Istanbul on Saturday. Zaher Birawi, a close ally of Galloway during the past Viva Palestina convoys, was named the official spokesperson of the flotilla.

The Israeli navy is preparing to stop the flotilla, although details have not yet been released.

Yildrim, the IHH leader, challenged the Israelis to try stopping the ships:

"Let them [Israel] come and attack us, we have no preparation to strike back. Whether they fire down on us, bomb us with airplanes, we will not let them onto our ships."

Political advisor to Hamas Prime Minister Ismail Haniya, Ahmed Yousef, stressed in a press conference in early May that Israel should not block the sea convoy.

Israel's Ministry of Foreign Affairs issued a statement Monday about the flotilla, "…they are less interested in bringing in aid than in promoting their radical agenda, playing into the hands of Hamas provocations. While they have wrapped themselves in a humanitarian cloak, they are engaging in political propaganda and not in pro-Palestinian aid."

Some Israeli civilians have formed a grassroots campaign to sail out and confront the flotilla.

IHH announced that it would create a "floating island of ships off Gaza shores" if Israel attempts to intercept the flotilla's ships. Two Hamas officials, Mohammed Shehab and Jamal Skeik, attended a meeting in which IHH representative Mohammed Shehab spelled out plans.

A pledge by Shehab, a Hamas parliamentarian, made the motivation behind the entire project clear:

"'We in the Hamas Movement follow up all the help and efforts extended by the Turkish humanitarian foundations, and we are eagerly waiting for the arrival of the convoy, which is the biggest of its kind since the Israeli embargo was imposed on the Gaza people…and we are also determined like you to break the siege with all means.'"