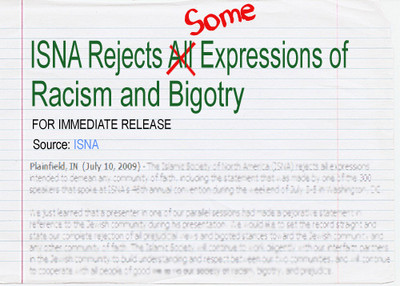 The Islamic Society of North America (ISNA) has rebuked anti-Semitic comments by a speaker at the group's national convention July 4th weekend.

As the Investigative Project on Terrorism reported last week, Warith Deen Umar's remarks during a "meet the authors" panel included claims that Jews controlled the world, used the Civil Rights movement for their own gain and suffered the Holocaust as a punishment for being "serially disobedient to Allah."

In a statement, ISNA expressed "our complete rejection of all prejudicial views and bigoted stances toward the Jewish community and any other community of faith." ISNA President Ingrid Mattson also was quoted in the statement:

"We pride ourselves in the many good relations we build with our interfaith partners for peace. There is no place for bigotry and intolerance in our organization and community."

The statement was issued late Friday afternoon and is notable for what it doesn't say as much as for what it does. It never identifies Umar as the speaker. While ISNA "rejects" his message, it never apologizes for facilitating them during a convention that featured a high-profile evangelical Christian leader and leaders of national Jewish movements.

And it seems to pass the buck when it comes to ISNA's vetting process:

"These sessions are proposed by members of the community, and the proposal described a completely different content than what reportedly transpired. The title of the speaker's presentation was 'Jews for Salaam [Peace],' and the presentation was described as a '… blue print for world peace. Christians, Jews and Muslims have common roots; focuses on the unique position Jewish people are in to move the world toward peace.'"

As our story pointed out, however, Umar's radicalism and anti-Semitism were easily discoverable to anyone who bothered to look. A simple Google search for Umar and his book titles turns up this 2003 article on Umar's opinion that the 9/11 hijackers were martyrs; this excerpt from his book Judaiology, which describes "the inordinacy of Jewish power" and calls Jews "an amazing people who can steal you blind as you watch; and this audio recording from a 2004 speech in which Umar endorses violence:

The statement also ignores Umar's rambling theory at the ISNA conference that Hurricane Katrina was a wrath of God punishment for homosexuality and his conclusion that there should be more jihad even if people are too afraid to agree.

Umar sold copies of Judaiology and his newest book, Jews for Salaam at a booth during the ISNA convention. ISNA's pre-convention vendor statement demanded that all literature at its bazaar "must be pre-approved in writing by ISNA, in ISNA's sole and absolute discretion. Book selling vendors must complete enclosed form providing inventory of the literature to be sold at ISNA." [Emphasis added]

Whether that was an empty promise or someone signed off on Umar's anti-Semitic books has not been explained.

Likewise, ISNA had nothing to say about a second speaker on the authors' panel, who argued that Hezbollah, a U.S.-designated terrorist group second only to Al Qaeda in the number of Americans it has killed, serves as a protective force for Lebanon. Cathy Sultan's remarks ignored Hezbollah's role as an Iranian proxy and its campaign of violence that may have helped turn Lebanese voters against it last month:

"Hezbollah still serves a role. I think that Lebanon is still under constant threat from its southern neighbor. And I see nothing wrong, as long as Hezbollah abides by certain rules and regulations; I see no reason why Hezbollah should not remain armed."

The speakers were not challenged on their assertions.

The disclosures come at a bad time for ISNA, which has been trying to build bridges with other religious communities and with law enforcement. Those efforts seem to be advancing despite the fact ISNA maintains ties to some of the same people who were part of its 1981 creation by Muslim Brotherhood members in the United States. The organization is included among unindicted co-conspirators in the Hamas-support prosecution of the Holy Land Foundation for Relief and Development. ISNA board member Jamal Badawi also was named as an unindicted co-conspirator, listed among people who raised money for the Holy Land Foundation for Relief and Development (HLF), which then funneled money to charities controlled by Hamas.

The IPT has chronicled ISNA's radical history and the incendiary rhetoric offered at previous conferences. Those examples fall well short of the hate speech Umar offered this year.

Yet ISNA's statement takes no responsibility for his presence or the totality of his message. For another critique, see this from Daniel Pipes.

Listen to Umar's comments at the ISNA convention here, here, here and here.