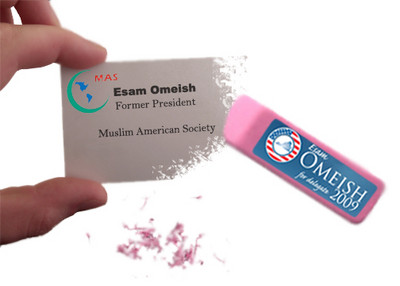 On the eve of a Democratic primary election in Virginia, Secretary of State Hillary Clinton has handed a public relations bonanza to an Islamist candidate who has praised Palestinians for choosing "the jihad way" to liberation.

Esam Omeish is considered a dark-horse candidate in the Virginia House of Delegates District 35 race. The primary is Tuesday.

On Thursday, Clinton invited Omeish to participate in a national conference call to discuss President Obama's Cairo speech aimed at repairing America's image with Muslims. In that speech, Obama made clear demands for Hamas to renounce violence and recognize Israel's right to exist:

"Resistance through violence and killing is wrong and does not succeed."

"Hamas must put an end to violence, recognize past agreements, and recognize Israel's right to exist."

That's more than Omeish has been willing to do. In a 2000 speech given at a rally recorded by the Investigative Project on Terrorism, Omeish congratulated Palestinians for choosing the jihad way and said "we are with you and we are supporting you and we will do everything that we can, Insh'Allah, to help your cause."

The speeches came during the early stages of the second Palestinian uprising, this one called the Al Aqsa Intifada, which featured a series of deadly terrorist attacks against Israelis.

Omeish's words came back to bite him in 2007. He had just been appointed to a state immigration panel by Gov. Tim Kaine, but he was forced to resign shortly after when Kaine learned about the video. Omeish since has claimed his words were taken out of context and that the use of the word "jihad" was not a call for violence:

"It means emotional, intellectual as well as physical struggle. And I think it's important for us, if we want to engage the Muslim community, it's not to allow ourselves to define them but to allow them to define themselves for who they are."

As the IPT reported last month, the videos represent but two examples of Omeish extolling jihad, Hamas leaders or the need for a transformation in American culture to make it more compatible with Islam. In January of this year, lamenting U.S. refusal to join a United Nations resolution condemning Israel's war with Hamas, he called for:

"[A] real change within our community that embraces their identity as an American, but understand their mission in life is the values and the principles of Islam, which are compatible with their identity, and must understand that we cannot remain complacent. We cannot allow the status quo to continue. We need an American Islamic movement that transforms our status, that impacts our society, and that brings forth the change that we want to see."

Omeish's campaign website describes him as a community organizer, but makes no mention his years as president of the Muslim American Society, an organization founded by Muslim Brotherhood members in the United States. Nor has he addressed his controversial "jihad way" comments.

Omeish also served as a founding member and president of Georgetown University's Muslim Students Association (MAS) chapter. Like MAS, the MSA was created by Muslim Brotherhood members in the United States. Before becoming a candidate, Omeish insisted MAS no longer had Brotherhood connections.

But the campaign sprang into action Thursday afternoon, issuing a press release trumpeting Omeish's participation in Clinton's call. The release said that during the call, Omeish said:

"I want to express my resounding support of our President, we are proud of him, we are behind him and support him whole-heartedly. Muslim Americans represent America's great diversity and their engagement and involvement is one of the most focused parameters that the Muslim world uses to perceive America. The president outlined a 7 item agenda and action plan and I would like to add another item which is the domestic agenda: How can we increase the involvement of Muslim Americans and get them more involved ( i.e. facilitate their involvement and provide opportunity for that to happen)."

Pointing out his past statements, the release said, is an exercise by "my friends on the far right and even some of those in the media, that continue to try and distort my record and my name."

Given a chance to explain that by one news outlet, Omeish passed.

He did enjoy strong fund raising in the latest reporting period, which ended Friday. His campaign reported collecting more than $75,000 in contributions, which was the most of the four-candidate primary field. Most of the funds appear to have come from the area Muslim community.

Mark Keam, a former chief counsel for Illinois Sen. Dick Durbin on the Senate Judiciary Committee, raised nearly $62,000. Keam still has a comfortable financial advantage over the rest of the field after collecting 123,000 during the first quarter. Omeish lent his campaign $45,000 from his own pocket.

In an editorial endorsing Keam, the Washington Post said Omeish says good things, but that his "jihad way" remarks "should be a disqualifier." Keam also won Virginia Congressman Gerry Connolly's endorsement. If elected, Keam would be the first Asian-American elected to the Virginia Assembly.

Omeish's hopes may rest on getting out the vote. While he doesn't talk about MAS, the organization is based in Northern Virginia and has an active political wing that registers voters and organizes turnout.