Update: The United Nations Economic and Social Council voted Dec. 14 to remove Iran from the Commission on the Status of Women. 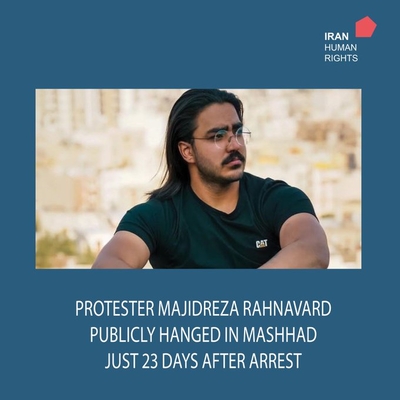 The wave of protests and social upheaval that erupted in Iran after the death of 22-year-old Mahsa Amini has not quieted down. Amini died in custody after Iran's morality police detained her for "improperly" wearing her hijab, as required by the Islamic Republic.

As the popular revolt continues, Iranian state media are inciting violence against the protesters, while the regime tries to recast the protests as a Kurdish separatist plot.

It went one step further last Thursday, with its first execution of a detained protester. Dozens more people have been convicted of similar charges. A young Iranian, Mohsen Shekari, 23, was hanged without a real trial. Iran publicly executed a second protester, Majidreza Rahnavard, Monday morning. The death toll in Iran by the government persecutions against the protesters has reached 475 dead – among them 65 children – according to the activist Human Rights Activists News Agency.

Iran is using an elaborate disinformation operation to undermine support for the uprising. Initial, and ultimately false reports Dec. 4 indicated that the regime had abolished the notorious morality police, the very one implicated in Amini's tragic death.

In reality, the regime never said it would disband the morality police. It started with a comment by Iranian Attorney General Mohammad Jafar Montazeri, who was asked about an absence of morality police on the streets.

Montazeri rejected international media reports, saying that "no official authority in the Islamic Republic of Iran has confirmed the closure of the morality police."

Meanwhile, Iranian media incited violence against protesters by demonizing them collectively as anti-patriotic or seditious elements. The daily Vatan Emrooz claimed last week that the protesters are an "anti-Iranian" movement that threatens truck drivers and hinders movement in order to hurt the economy.

In another disinformation campaign, the regime and its affiliated media now attempt to portray the protests as a dangerous ethnic revolt of Iran's Kurdish minority.

Iranian daily Kayhan described the protesters Dec. 4 as "secessionists" and "murdering terrorists." Kayhan's use of the term "secessionists" is a reference to the Kurdish element in Iran, present in great numbers in its Western border regions adjoining Iraq.

While protests continue throughout the country, including the capital in Tehran, they are especially active in the Kurdish regions. Mahsa Amini whose death by the morality police sparked the protests, was of Kurdish descent.

The conservative Vatan Emrooz daily ran an op-ed Dec. 5 titled, "This is terrorism," calling on the regime to treat protesters as internal terrorists. "Iranian cities have witnessed various terrorist operations rather than rejecting protests and gatherings on the streets," it said. "In this atmosphere, the testimony of a large number of security forces is also a bloody testament to the blind or targeted terrorist acts of subversives."

Iran's security apparatus has killed dozens of Kurdish protesters. The harshest government crackdowns have occurred in Sanandaj, Kurdistan's provincial capital. Iran went so far as to attack Kurdish regions of neighboring Iraq in the biggest cross-border strike since the 1990s. Iranian Kurds expressed their dissent against the governmental oppression by celebrating the recent victory of the U.S. national soccer team over Iran in the World Cup.

At least one man was killed by government forces for celebrating his country's loss.

Iran's persecution of Kurds often includes made-up accusations of collaboration with the Israeli Mossad. It claims four Kurdish political prisoners who have been already in detention for four months are "Mossad-related agents." State media aired "confessions" by the four last Tuesday, which could be a sign of impending executions.

It is clear that the regime wants people to ignore what protesters are saying: "Death to the dictator," "Woman, life, freedom," and "Death to Entire Regime." Instead, it wants people to minimize the protests as one ethnic group's separatist revolt that undermines the country.

Meanwhile, the United States wants to remove Iran from the UN Commission on the Status of Women, a prospect to be decided Wednesday, due to its restrictive view of women's rights and violent response to those who advocate for better treatment.

But Iranian dissidents want the United States to be more vocal. The U.S. Senate Foreign Relations Committee approved a bipartisan resolution last Thursday in support of the ongoing anti-regime protests in Iran.

Congress, it said, "commends the bravery, courage, and resolve of the women and men of Iran who are participating in the current protests to defend their fundamental human rights; and risking their safety to speak out against the human rights abuses committed by the Iranian regime."

The greater picture has to be kept in mind. The theocratic Iranian regime has not moderated in any meaningful ways its undemocratic position on women's rights. Contrary to initial media reports, it has not disbanded its morality police.

The number of people executed in Iran just for 2022 has now exceeded 500, according to a report by the Norwegian Iran Human Rights (IHRNGO). This is the highest rate in five years, an indication that the regime is not moving in any direction of easing its oppressive grip on society. Just this year Iran has caused the death of nearly 1,000 of its citizens, i.e. the Iranian regime is responsible for the death of three people every single day of the year.

Moreover, Tehran attempts to turn the protests into a civil war confrontation by blaming the Kurds. The protests in Iran are still very much alive. Iranian people are in the streets expressing their fundamental opposition to the theocratic regime.