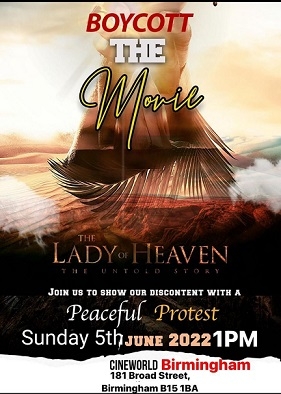 Once again, Muslim mobs in the United Kingdom have been offended by a piece of art, and have intimidated the theater chain Cineworld enough to stop screening the £12 million film, "The Lady of Heaven."

The Western media has not yet grasped the full extent of who the main actors are behind forcing Cineworld to capitulate to whims of angry Muslim mobs. In particular, Iran's role in organizing and being behind the intimidating pickets outside the cinemas is completely missed.

"Due to recent incidents related to screenings of The Lady of Heaven," a company spokesperson said, "we have made the decision to cancel upcoming screenings of the film nationwide to ensure the safety of our staff and customers."

"The Lady of Heaven" is not some Western blasphemous movie against Islam. It tells the story of Fatima, the daughter of the prophet, according to the standard Shia narrative, as a virtuous daughter, a mother and a role model for women today. The movie presents the Shia narrative of Islam, which prompted angry Sunnis to call it a false, blasphemous account of history. Iran's ruling mullahs also are upset, even though it uses the exact narrative that Iran teaches every day in its schools, on state TV, and wherever it can to export Ayatollah Khomeini's revolution. What is troublesome for Iran however, is that Yasser Habib, the Shia scholar who wrote the script, is a disciple of Ayatollah Mohammed Ridha al-Shirazi who opposes the regime in Iran.

The Shirazis are strict and uncompromising in their adherence to religious edicts and rituals. But they consider political Islam as blasphemous and regard Khomeini's system of governance, known as Velayat-e-Faghih, or guardianship of the Islamic jurist, as sacrilegious. Velayat-e-Faghih is Khomeini's thesis that justifies the rule of state by the Shia clergy.

The Shirazis' rejection of Shia clerics ruling Iran, and their call for the clerics to return to their more traditional role as faith leaders, is perceived by the Iranian regime as a direct threat to their rule. Hence the regime in Iran has been actively opposing the movie ever since it started production.

In December 2020, Ali Shamkhani, secretary of the Supreme National Security Council of Iran, called the movie a joint Western, Jewish and Arab states project to divide Muslims. He slurred Shirazis as "Shias Made in England," a phrase used by the Iranian regime to describe them as being British lackeys.

A joint statement by pro-Iran Shia clerics in the UK condemning the movie was published in January 2021. In the statement the clerics said they were unaware of the contents of the movie in detail, but they still said they are concerned about its divisive nature. 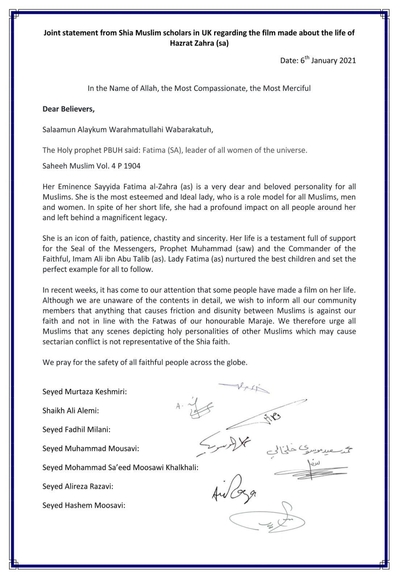 The former Iranian ambassador to the UK, Hamid Baeidinejad, tweeted in February last year, saying he "categorically condemned the film."

Iran's state is well known for its promotion of sectarianism, but when it came to this movie, officials seemed very concerned about any "divisive action."

Videos circulating online show Sunni protesters outside Cineworld cinemas in various cities throughout the UK. In Leeds, they chanted "Shia Kaffirs [infidels]" outside a theater. In another video, posted Friday, Robert Carter, aka Muhammad Ali Carter, a British Shia Muslim convert, stands among angry picketers outside a Cineworld branch, as they chant "Shia Kaffir." Carter often appears on Iran's state-run Press TV defending the regime. But on this occasion, he had no qualms about the anti-Shia chants howled around him. Instead, Press TV was promoting the latest assault on the UK's freedom of speech.

Britain does not have a blasphemy law. But it seems the adherents of political Islam are able to dictate what the British public can watch. In all the videos of the angry pickets outside Cineworld cinemas, there is no police seen who should be safeguarding the cinema staff and the viewers against the protesters.

"This is an act of pathetic cowardice by Cineworld," wrote Toby Young, general secretary of the Free Speech Union. "It should not allow an angry mob to dictate what films it shows in its cinemas."

The assault on free speech in the UK continues.