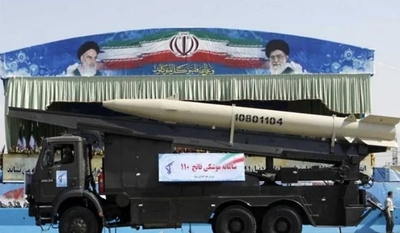 With its invasion of Ukraine stalling, and Ukrainians liberating as much as half their seized territory, Russia is turning to Iran to procure missiles to continue its campaign against Ukraine's civilian infrastructure.

"The Iranian missiles are important to the Russian war effort," military analyst Savvas Vlassis of Greek international security website Doureios Ippos, told the Investigative Project on Terrorism, "because the Russian Air Force has not affected substantially the course of the war. Iran appears willing to support the Russian war effort with a considerable number of [short range ballistic missiles], especially the Fateh-110 3rd or 4th generation missiles carrying a 500 kilogram warhead. Russia has depleted the greater part of its stockpile of ballistic and cruise missiles, therefore they need the Iranian missiles to keep the pressure on Ukraine."

"Iranians have to find a working balance between helping their Russian allies and preserving their own military capabilities against their rivals," Vlassis said.

The Russian army already has used Iranian drones extensively in its attacks, causing havoc with a series of strikes on densely-populated Ukrainian cities and critical infrastructure.

"The most decisive response to U.S. sanctions ... is the cooperation of independent countries," Raisi said. The meeting also covered cybersecurity and "measures countering the interference of Western security services in the internal affairs of both countries," according to an Iranian press communique.

The Iranian missiles are expected to be delivered to Russia before the end of the year. According to reports by Ukrainian intelligence agencies, Iran will also supply additional drones, more than 200 Shahed-136 and Arash-2 kamikaze drones, and Mohajer-6 reconnaissance and combat UAVs.

Iran initially denied its involvement in the Ukraine war in both official statements and contacts with the EU despite the fact that its drones, notably the one-way attack Shahed-136 model, were undeniably identified in the deadly attacks. As the evidence grew too much to credibly deny, Iran's Foreign Minister Hossein Amir-Abdollahian finally admitted Nov. 5 that Iran has provided drones to Russia. Iranian officials tried to downplay their involvement, claiming that the drones were sent to Russia months before the Ukrainian war and therefore the Iranians were unaware of Russian intentions to use them. However, evidence from Ukrainian military intelligence suggests otherwise, as many drones were dispatched after the start of the invasion in late February.

Interestingly enough, conservative circles criticized the change in official rhetoric. They worry about possible repercussions of Iran's active support of the Russian invasion. The Iranian government should have not allowed Moscow to use the Iranian drones against Ukraine in the first place," argued Massih Mohajeri, editor of Jomhouri-e Eslami (Islamic Republic) newspaper.

In reality, not only was Iran aware, it has also dispatched personnel to Russian-held territories of Ukraine to train Russian troops, according to an Oct. 12 report by the Institute for the Study of War and reports by Ukrainian media.

In addition to helping an ally, Iran's supply of drones and rockets targeting population centers provide a testing ground for weapons that could be used in a future attack against Israel.

On this point, Iran is menacingly candid. A newspaper affiliated with Iran's Revolutionary Guard Corps (IRGC), designated by the United States as a foreign terrorist organization, on Monday published an open threat in Hebrew language on its front page. The Sobh-e-Sadegh newspaper warns that a new hypersonic missile reportedly developed by Iran could reach Israel in "400 seconds."

Hypersonic missiles can evade defense systems with their great speed and maneuvers. Such a weapon could first dismantle Israel's aerial defense system, laying the ground bare for massive drone attacks. "The new missile can pass through all missile defense systems, and I don't think that the technology capable of intercepting it will be achieved in the decades to come," triumphantly declared General Amir Ali Hajizadeh, commander of the IRGC's Aerospace Force. "It can target the enemy's anti-missile systems, and its production marks a huge generational leap in the development of a new generation of missiles."

Hajizadeh's bloody record includes the downing of an Ukrainian airliner in 2020, killing all 176 passengers and crew.

Russia is actually losing this war due to superior Western military technology provided to the Ukrainian side. After almost nine months of a conflict that the Russian side thought would only last a week, Russia is now running out of high-precision weapons. Russian frontline units suffer up to 500 casualties daily and morale among the troops is collapsing, while 400,000 conscription-aged men have fled the country.

The Putin regime is in clear danger and holding on to power is intricately connected with some kind of success in Ukraine. As the once unbelievable prospect of a Russian tactical defeat in Ukraine is becoming clear, Iran is coming to the aid of Russia with its deadly missiles.