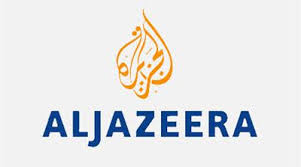 When terrorists randomly attacked Israeli civilians in recent weeks, some surprising voices reacted with horror. The string of attacks that killed 14 Israelis drew condemnations from Turkey, the Palestinian Authority and Jordan, among others.

To top anchors on Qatar's state-owned Al Jazeera network, however, the attacks were cause for celebrations and praise.

"The martyrdom of the attacker of the Tel Aviv operation, the Palestinian computer expert, the son of Jenin camp, Ra'ad Hazem, after he made the Israelis taste humiliation and so they spent a dark night of terror imprisoned in their homes, while an entire army of thousands of Israeli soldiers pursued him for 9 hours, he freely wandered until he reached Jaffa," Al Jazeera host Ahmed Mansour wrote April 8. "He clashed with an Israeli force in Jaffa and was martyred, may God have mercy on him."

Mansour was writing about Ra'ad Hazem, who killed three people and wounded 11 others on Tel Aviv's popular Dizengoff Street. The post included two pictures of Hazem, one showing him cradling a baby and the other showing him hoisting a rifle. 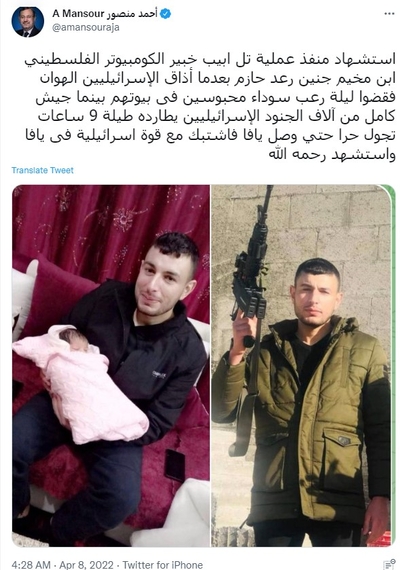 The terrorist, Diaa Hamarsha, "moved steadily and courageously from one area to another, focusing on his targets from the settlers precisely, spreading terror among them before he was martyred," Mansour tweeted.

He also posted a video of the shooting, including Hamarsha shooting and killing a passing motorist.

Its residents can only be considered "settlers" if one believes Israel should not exist.

"The Tel Aviv operation is a lesson to the normalization regimes: Israel will not protect you as it can hardly protect itself #Palestine," Rayyan tweeted April 8, above a video in which the speaker says that one "resistance fighter" forced a curfew in Tel Aviv

"In 7 days, 11 Israelis were killed, coinciding with the summits of shame [Negev Summit]," she wrote.

The network's Egyptian outlet posted a picture of Hamarsha, describing his victims in Tel Aviv as "settlers" and saying he was "martyred in Bnei Brak."

The Tel Aviv attack came during the Islamic holy month of Ramadan.

"It is important to understand that Ramadan, for Islamists, is not just time for worship, but for jihad, too. Their teaching manual [Islamic jurisprudence] assert and link all decisive military battles in the history of Islam with Ramadan," Egyptian writer Nervana Mahmoud told the Investigative Report on Terrorism.

Al Jazeera later published a hagiographic profile of Hamarsha on its Arabic language website hailed him as "the Silent Resistance fighter."

"He (Hamarsha) was known for his great ambition, gentleness, and wide relations with people," the article said. It quoted his father, who said Hamarsha "was not one of those young people looking for the passion and amusement of life."

Other Islamist networks celebrated the terrorist attacks. Hizballah's TV network Al-Manar posted an article on March 31 praising the "heroic operation in the occupied Palestinian territories represented the practical response to the Negev Summit of normalization with the Israeli enemy and these are Arab regimes and treacherous leaders who stab the back of the Palestinian cause and its sanctities."

Again, none of the attacks took place in what can be called "occupied" areas.

"The heroic operation carried out by the heroic martyr Diaa Hamarsha hurt the entire Zionist entity and redrew the map of the homeland on the eve of the anniversary of (Palestinian) Land Day," the Al-Manar article added.

In Gaza's Hamas-controlled Beit Hanoun, people celebrated and handed out candy in the streets after the Tel Aviv attack. Similar celebrations were seen in Hizballah-controlled southern Lebanon.

Iran's Al Quds Force commander Esmail Ghaani lauded the attacks during a commemoration ceremony of an Iranian commander in Tehran.

"We have made it clear to the occupying Zionist regime that any group fighting it will have our blessing," Ghaani said. "Palestinian youths who have shaken the occupied territories."

These kinds of celebratory reactions sadly are commonplace among Palestinian militants and their supports. Mansour previously supported a terrorist attack on a tourist bus in Egypt in 2014 which left four people dead and 14 injured.

It "is not a terrorist act, but an act of heroism," Mansour wrote.

He also endorsed attacks on Egyptian police officers as retaliation for what he called the "coup" in Egypt a year earlier.

In 2020, Gamal Rayyan asked his Twitter followers whether Arab leaders who supported President Donald Trump's peace plan should be targeted for death.

"After the Deal of the Century revealed the presence of Arab figures, would you approve that the Palestinian factions form highly trained special units to 'handle' the Arab countries figures who are working on thwarting the Palestinian Liberation movement in order to stop these countries? Your opinion is important," Rayyan tweeted in February 2020.

An Egyptian court ordered Al Jazeera's Egypt channel, along with three other Islamist affiliated TV networks, to stop broadcasting in September 2013. The court said that it was "inciting violence that led to the deaths of Egyptians" and its coverage was biased toward the Muslim Brotherhood.

The unabashed support for terrorism shown by Al Jazeera anchors merits more attention. Their role in radicalizing millions of followers using misinformation and lies is deplorable for a purported professional news network.