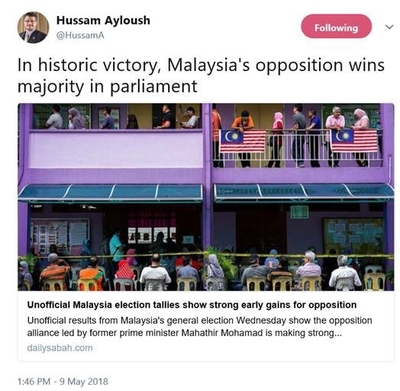 Fresh off the increasingly awkward relationship between some of the leaders of the Women's March and their associations with notorious anti-Semites such as Louis Farrakhan, there is a new champion illustrating the consistent disregard for anti-Semitism when it serves an Islamist purpose.

Women's March organizers Linda Sarsour and Tamika Mallory have run into trouble for supporting Farrakhan, and Sarsour has been criticized for her anti-Zionist and downright anti-Semitic social media posts.

Malaysia's newly elected leader never kept his anti-Semitism a secret, yet his election is feted on social media by renowned American Islamists.

A recent Times of Israel article lists some of the anti-Semitic rhetoric expressed by newly elected Prime Minister Mahathir Muhamad:

In addition, during a 2009 Iranian PressTV interview, Muhamad explained that in the U.S. there is a "Jewish Lobby" and that "the press is controlled almost entirely by the Jewish people."

Malaysia has recently been in the news following outrage by Hamas over the assassination there of a notorious Hamas operative, and has been noted as a hotbed for Hamas activity.

Despite questionable support for U.S. designated terror organizations and the open display of such patently anti-Semitic rhetoric, American Islamists feted the Malaysian's return to government.

Dhouadi has expressed support for Sheikh Abdel Majid Al-Zindani, reposting a video on his Facebook page. Al Zindani, a specially designated terrorist and former Osama bin Laden loyalist, is listed by the U.S. Treasury Department as a Specially Designated Global Terrorist due to his ties to al-Qaida. Treasury officials noted in 2013 that Al-Zindani is a "spiritual leader" to al-Qaida in the Arabian Peninsula (AQAP).

Ayloush is particularly inspired by Islamist movements, which was in evidence when he tweeted an Islamist rallying cry popularly used during the Arab Spring to bring down Syrian President Bashar al-Assad, following the election of Donald Trump calling to "overthrow the regime." Ayloush got into hot water on other occasions such as when he was forced to walk back his celebration of dead civilians following the downing of a Russian airplane.

Ayloush even likened Israel to Iran earlier this month, after Israel struck an Iranian missile base in Syria that is part of the Islamic Republic's emerging military infrastructure inside Syria. 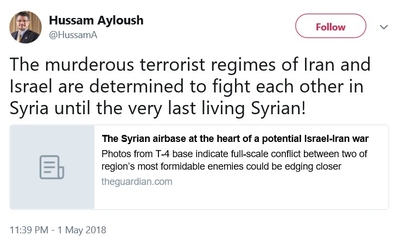 As the IPT has reported, Ayloush reacts angrily and defensively when asked whether Hamas is a terrorist group.

Malaysia, meanwhile, has emerged as an important support base for Hamas, notes Jonathan Schanzer at the Foundation for the Defense of Democracies.

Given Muhamad's views toward Israel, Malaysia's support for Hamas, a terrorist organization with a stated aim of the destruction of Israel, raises serious concern for future governmental policy.

Another notable American Islamist, Radwan Masmoudi, president of the U.S. based Center for the Study of Islam and Democracy (CSID), and a self-identified 'Member of Ennahda party in Tunisia,' lobbies actively for the Muslim Brotherhood-linked party in the United States. Masmoudi responded to a directive from University of Denver's Center for Middle East Studies Director Nader Hashemi: "First we take Malaysia, then we take down the other authoritarian regimes that are destroying our world, inshallah (God willing) with, "YES, we will." 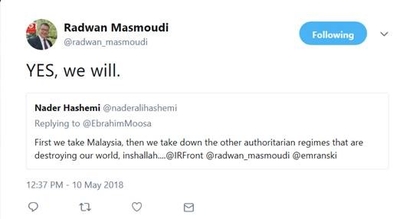 In fact, the Ennahda party itself tweeted its congratulations to Mohamad on his victory.

An immediate consequence of Muhamad's election is the full pardon and Wednesday's release of Islamist Anwar Ibrahim, who was convicted in 2000 on two charges of sodomy. Ibrahim served as a representative for Asia Pacific of World Assembly of Muslim Youth (WAMY) and is the co-founder of the International Institute of Islamic Thought (IIIT). IIIT's senior leaders were listed among "members and leaders of the IKHWAN [Muslim Brotherhood]" in the United States in FBI records obtained by the IPT. Talk in Malaysia already includes speculation that Ibrahim, a noted anti-Semite himself, could be a successor to Muhamad.

Nevertheless, Shibley Telhami, Anwar Sadat Professor for Peace and Development at the University of Maryland, was overjoyed at the prospect of Ibrahim's release. 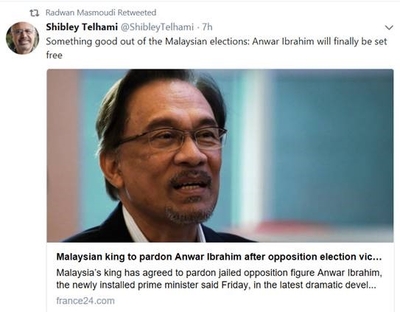 These examples of unquestioning support shown for Islamist victories while blatantly disregarding anti-Semitism, and other repugnancies is yet another reminder of Islamist priorities. Victory at all cost.