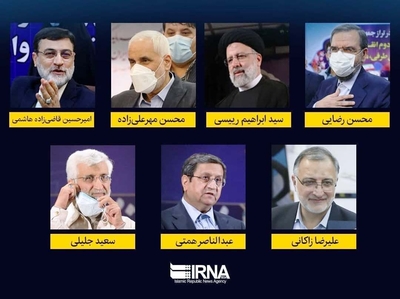 Western media, including in the United States, often portray Iran's presidential elections as a contest between a reformist and a hardline candidate, but U.S. policy makers must not fall for this kind of simplification.

Iranian voters are asked to choose between a handful of pre-approved candidates, making it more appropriate to call it a "presidential selection." The election scheduled for this Friday is no exception. Nevertheless, each election reveals a lot about the internal politics of Iran's ruling clerics and the direction they intend to take.

Iran's next president will be whomever the deep state regards as the ablest and most adept to safeguard the regime for the next eight years. Iran's deep state includes the Supreme Leader and his most trusted circle, who decide the regime's macro policies, including its foreign policy. Every Iranian president and his cabinet members are tasked with implementing those policies with various degrees of window dressing for the outside world.

In 1997, the regime required a softer image, offered by Mohammad Khatami, to send promising signals to the world of pending reform in Iran.

This was largely because the German judiciary had issued international arrest warrants for top Iranian officials for their role in the assassination of Iranian dissidents at Berlin's Mykonos restaurant. Several European countries reacted to the court's action by closing their embassies in Iran. The regime felt threatened, and Mohammad Khatami's role was to buy time for the mullahs by duping the Europeans into thinking there was hope for an Iranian Glasnost – or what they referred to as "critical dialogue." Khatami also effectively deceived George Bush's administration and his Western allies into thinking Iran could be relied on as a partner in the fight against terrorism. This belief proved to be a costly mistake that led to U.S. forces getting bogged down in a long war with Iran-backed proxies in Iraq.

Similarly, when international sanctions started to bite Iran's economy toward the end of Mahmoud Ahmadinejad's presidency and hampered the financing of its proxy groups, Iran's leaders sought relief through a nuclear deal. The rebranding of Hassan Rouhani, a long time Islamic Republic security apparatchik, as a moderate allowed the Obama administration to find a suitable narrative to justify a deal with Iran, as Ben Rhodes told the New York Times in 2016.

The next crucial concern for the Islamic Republic's leadership is a big voter turnout to provide the new government legitimacy to the outside world.

Iranian representatives often cite voter participation to foreign audiences without discussing how voters were mobilized. The likes of Foreign Minister Mohammad Javad Zarif have argued to Western audiences that if the regime was that bad, people would boycott the elections.

To spur voter participation in a sham election, the approved candidates often present a good cop/bad cop scenario, or more accurately, a choice between a bad candidate and a worse one.

Normally, there is one horrendous nominee among the Guardian Council's selection of pre-approved candidates who will advocate an even harsher and stricter Islamic lifestyle. He'll be pitted against one who will promise, although rarely deliver, a softer approach. Thus, even those who are against the regime and want to see an end to the Islamic Republic feel compelled to choose the bad candidate over the worse one.

This scenario, which Western journalists often cast as a battle of the hardliner versus the reformist, has once again manifested itself in this year's elections.

While there are seven candidates, two in particular exemplify the good cop/bad cop choices.

Ayatollah Ebrahim Raisi, the notorious head of Iran's judiciary, and a man complicit in the mass execution of mostly left-wing political prisoners in 1988, is the bogeyman. The former head of Iran's Central Bank, the Western educated, Abdolnaser Hemmati is the milder candidate whose selection by the Guardian Council gives anti-regime voters a reason not to boycott the farce elections.

The debates among the pre-approved candidates clearly demonstrate this point. During these debates that were broadcast on Iran's state TV, Hemmati defended his dismal track record at the Central Bank, which saw a huge devaluation of the Iranian currency and rampant inflation. He claimed that he stopped Iran from becoming another Venezuela, and he is running to make sure "the economy does not become a North Korea." Viewers thus got the warning that if they don't come to the polling stations, the bogey figure, Raisi, will turn Iran into a North Korea.

"People! I am not yet the victor in these elections, because the majority of you have decided not to vote this time," Hemmati said in prepared closing remarks. "But I beg you please consider to strengthen the republic. We need to expose the power of the powerless ... if we don't make the right choice now we will face another 20 years of the same problems and even fall behind Iraq and Pakistan."

"Many consider the result of this election pre-determined but we can change the result," he continued. "The help I seek from you is for you to vote, and even if you want to protest against the status quo, do so by voting for me."

But after 40 years, the people of Iran have come to see through the good cop/bad cop game.

Ayatollah Ali Khamenei is so desperate for another large turnout, he issued a fatwa allowing married women to "leave the house without her husband's permission if it's for the purpose of voting." He called voting a religious duty that, if it is not carried out, will have consequences in the afterlife.

On an even more comical side, one medical practitioner in Raisi's campaign has even offered seven free circumcisions for the children of those who cast their vote Friday.

The televised debates also revealed much more about Iran's internal situation, including how alienated ethnic minorities and those living in remote provinces of Iran have become. Candidate Mohsen Rezaei, the former head of the Revolutionary Guards, tried to appeal to Iran's ethnic tribes by promising that his administration will include all ethnicities. Rezaei also tried to appeal to Iran's Sunnis and lamented on how alienated they have become. Iran's constitution prohibits Sunnis from becoming president or occupying other prominent positions in the government.

The seven candidates on the ballot also reflect the tiredness of the regime. None of them had any viable program to tackle Iran's serious and growing challenges like water and electricity shortages, dangerous air pollution levels, unemployment, crumbling infrastructure or even the Covid pandemic.

All ideological dictatorships, like the Soviet Union and China, also routinely go through purges to survive. Scapegoats are needed for the main body of the establishment to continue. The Islamic Republic of Iran is no exception. Each presidential election is actually a new purge. We witnessed this with former establishment figures like Akbar Hashemi Rafsanjani, Mehdi Karroubi, Mir-Hussein Moussavi, Ahmadinejad and it seems this time round the Larijanis are to be purged.

Ali Larijani, the former speaker of the Majlis [Iran's parliament] and a nuclear negotiator, was publicly humiliated by the Guardian Council after it refused to approve him as a candidate.

Larijani should have checked all the boxes. He has always been loyal and obedient to the Supreme Leader. He has executive experience and meets the age requirements for the president. Western admirers, like the Atlantic Council's Barbara Slavin, were promoting him as an Iranian moderate ideal for bringing Iran back to President Obama's nuclear deal. He could have been quietly advised not to run to save himself the embarrassment, but Larijani was publicly rejected by the Guardian Council. No reason was given.

Regardless of who emerges as its next president, Iran – sensing weakness in the United States and its Western allies – believes it's in a position to act from a position of strength. The next president is likely to expand Iran's use of proxy groups like Hashd Al-Sha'abi [the Shia militia in Iraq], the Houthis, Hizballah, and Hamas to gain maximum leverage in the region and to use as bargaining chips in negotiations.

IPT Senior Fellow Potkin Azarmehr is a London-based investigative journalist, business intelligence analyst, and TV documentary maker who was born in Iran. He regularly contributes to several newspapers and television stations on Iran and Middle East related news. You can follow him @potkazar.