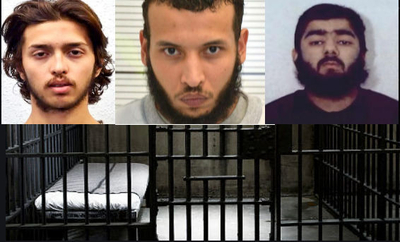 "We have become victims of our own success."

Those sobering words were among the findings in a report regarding Islamic radicalization in the United Kingdom's prison system.

The country's successful counterterrorism strategies thwarted a number of terrorist plots during the past decade. That success led to prosecutions under the UK's Terrorism Act, which more than doubled the population of convicted terrorists in British prisons. The record in handling those inmates is less impressive, former UK counterterrorism analyst Eilish O'Gara wrote in a paper published last month by the Henry Jackson Society.

The problem, as the report found, was that the "efforts at fighting terrorism and stamping out the sources of extremism" seemed to stop once the terrorists were incarcerated. No reason was given for that.

Counterterrorism officials and prison administrators have long known that prison walls cannot prevent a terrorist from acting or influencing.

Convicted terrorists make up .03 percent of the UK prison population – roughly more than 220 inmates – yet prison specialists are monitoring between 500-800 inmates for extremist views. Where did they come from? They certainly didn't just hatch overnight.

Studies have shown that dispersing terrorists among the general population increases the risk of radicalization. Prisons then become incubators or "breeding grounds," as one study found.

Incarcerated terrorists exert enormous influence on vulnerable inmates. UK terrorist watchdog Jonathan Hall acknowledged that convicted terrorists are "automatically" given a higher status by other inmates when they enter the prison. Some have likened it to rock-star status.

They, by virtue of their crime and notoriety, are seen as leaders.

The problem with rock stars is they often attract an entourage. Charismatic terrorists can do the same in prison.

To counteract this type of radicalizing influence, the UK in 2017 constructed three separation centers. These were not new prisons but rather "jails within jails" used to isolate convicted terrorists from the general prison population.

For a variety of reasons, the separation centers were never adequately utilized. As a result, two of the centers were closed, and only five of the more than 200 incarcerated terrorists are currently housed in the remaining center.

A Ministry of Justice spokesperson defended the closing of the separation centers: "The vast majority of extremist prisoners can be effectively managed in the mainstream prison estate."

Recent terror attacks by individuals like Usman Khan, Sudesh Amman, and Khairi Saadallah say otherwise. As an inmate in the general population, Amman had access to violent jihadi videos.

Saadallah was able to communicate with fellow inmate Omar Brooks, a radical Islamic cleric also known as Abu Izzadeen, who is tied to the terror group Al-Muhajiroun.

Both were in the general prison population at HMP Bullingdon.

In 2016, the UK implemented the Desistance and Disengagement Program (DDP). The program was designed to de-radicalize convicted terrorists who were released from prison. Later, it was expanded to include those terrorists still in prison and other inmates who had been radicalized while incarcerated.

The vast majority of the program's participants were either "pretending to sleep in class," refusing to participate, or feigning compliance.

Jonathan Hall, whose job is to monitor UK counterterror legislation, admitted in a report last month that "No one knows whether DDP is effective."

O'Gara's report went on to outline the organized structure of Islamic gangs operating in the UK prison system. The hierarchy consisted of leaders, recruiters, and enforcers. And while the leaders and recruiters were described as being "unwavering in their radical interpretation of Islam," the enforcers were simply described as having "a propensity for violence." The enforcers were responsible for implementing Sharia law in the prison.

This same structure was observed in the United States almost 20 years ago. Operation Hades, a multi-agency investigation into Islamic radicalization in the prison system, which I participated in, outlined the organization of radicalized inmates from prison to prison.

The roles were the same, and most of the networking between the faithful was done during Jummah services in the prison mosque.

There also appears to be a connection between the rise of Islamic radicalization in the UK prisons and violence against prison staff.

Given these failures, the UK appears caught in a downward spiral when it comes to dealing with prison radicalization. Nothing they've tried has been proven to be effective.

As a result, some are calling for increased police powers and changes in existing terrorism laws. One thing that cannot be done is to give up the fight and do nothing. That, O'Gara concludes, would lead to an increase in radicalization.

The UK may be the first western democracy to acknowledge its failure in combating the epidemic of Islamic radicalization in prison, but it is not the only country experiencing this phenomenon.

The European Union, with its increasing threat of Islamization in society as a whole, has also experienced these influences in its prison systems. Many of the terror attacks that took place in Belgium, France, Germany, Denmark, and Spain over the last decade were carried out by people who were radicalized in prison.

The vast majority of convicted terrorists and their radicalized followers eventually will be released from prison, and maybe not all jihadists can be de-radicalized. But prisons need not become incubators of the disease. Counterterrorism efforts should not stop at the prison gate.

A concerted effort is needed by western democracies to develop effective strategies that deal with recently-released terrorists and those radicalized in prison.

The longer we wait, the greater the threat grows.