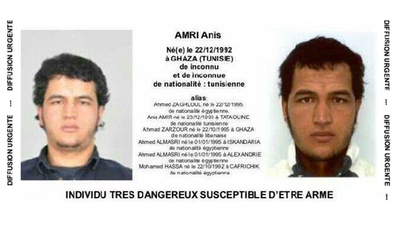 The Islamization of European societies has been a long term aim of Islamists, especially the Salafist groups. For the past few years, German Salafists and Islamists extended their activities targeting new immigrants in the country to native Germans.

Berlin's Senate had banned the group's activities before the raid, after it was found to have ties to the Islamic State, used anti-Semitic slogans, and called for the death of Jews. The group had contact with Anis Amri, the Tunisian terrorist and asylum-seeker who drove a hijacked a truck into a Berlin Christmas market in 2016, killing 12 people and injuring 48. Moroccan intelligence had warned German authorities about Amri's support for al-Qaida's affiliate Jabhat al-Nusra prior to the attack, but the warning was ignored.

Jamaatu Berlin advocates terrorist attacks on civilians, propagates a cult of martyrdom that increases the willingness to commit attacks, and promotes Islamic State ideology, said Berlin's Minister of Interior and Sports in a statement following the raid. The group rejects the principle of democracy and the rule of law, seeking instead to form a religious state governed by sharia.

"We have no room for terrorism propagation or the glorification of the so-called Islamic State," said Berlin's Interior Minister Andreas Geisel after the raid. "The danger of Islamist terrorism remains high. Today's ban is another building block in the determined fight against violent extremism."

A day earlier, a German court sentenced 37-year-old radical Iraqi cleric Ahmad Abdulaziz Abdullah to 10½ years in prison for being an Islamic State member and for terror financing in Germany. An estimated 1,060 people left Germany to fight with ISIS in Syria and Iraq, according to the German Interior Ministry.

Salafism is a puritanical reform movement that aims to return Islam to its original roots. Salafism doesn't accept the existence of other denominations of Islam such as Shiism. Through that narrow understanding of the Islamic faith, Salafi followers find themselves in conflict with believers of all other faiths, including Muslims. All jihadists and Islamists are Salafists of some degree. While many Islamists may not be violent, and even participate in the political process, the ideology behind Islamism can pave the way for jihadism by indoctrinating people with violent ideology. Muslim Brotherhood founder Hassan Al Banna defined his group, which seeks to establish a global Islamic state through proselytizing, as a "Salafist call, a Sunni way, a (Sufi) truth, a political body, a sports group, a scientific and cultural association, an economic society and a social idea."

Muslims converting to Salafism, thus adopting a radical form of the religion, is one of the dangers German authorities face. Salafist infiltration of the German society is not confined to major cities, but also reaches smaller towns, such as the mining town of Dinslaken- Lohberg. It became an Islamic State recruiting center and a headquarters for a Salafist group known as the "Lohberg Brigade." The group had an estimated 25 members and some of them were radicalized earlier as part of the Turkish far-right group Gray Wolves.

The number of Salafists in Germany has reached a record high of 12,150 followers in 2019, tripling since 2011. Many ISIS fighters managed to find their way back to Germany in recent years, according to a report this month on France's M6 television.

A study commissioned by the Interior Ministry indicated that almost half of young Muslims in Germany lean towards fundamentalist views. The 500-page study said that around one in four young Muslims is prone to violence. However, only a small percentage of the surveyed cases expressed their willingness to defend their religious convictions with violence.

Moreover, there are 627 potential terrorists living in Germany, German security forces estimated last September. The threat level remains "steadily high" with most of the threats coming from "individual assailants inspired by terrorist organizations."

But Jamaatu Berlin was not the only Salafist group that was banned in Germany within the past few years. In 2016, German authorities banned a group called Die Wahre Religion [The True Religion]. The group was responsible for convincing 140 young Muslims to travel to Syria and Iraq to join militants. Its activities reached many countries, including the United Kingdom, where its chapter also recruited jihadists. When it was banned, German police raided 190 known Die Wahre Religion locations across the country.

Founder Ibrahim Abu Nagie has acknowledged wanting to convert all Germans to Islam, opening the door to theological rule. Abu Nagie initiated a campaign in 2012 called "Read," which aimed to distribute 25 million free copies of the Quran to German citizens.

In 2013, Abu Nagie expressed his hopes that Germany would be governed by sharia law and blamed criticism of his group on German politicians and media being counseled by "Zionist advisers."

"I wish that Allah's sharia will prevail worldwide," Abu Nagie told German outlet SWR in 2012. Asked if he respects democracy, he said, "A Muslim who denies Sharia law is not a Muslim, he is leaving Islam directly. These are kuffar ("unbelievers"). As a Muslim, how can I accept a system other than Allah's?"

Hizballah as the "Shiite" Salafists

The danger presented by Islamist radicals in Germany is not confined to Sunni-Muslim radicals such as the Salafists, but also the Shiite ones, such as Iranian-backed Lebanese- Hizballah. Germany banned the group last April after determining it was responsible for "a multitude of attacks resulting in hundreds of deaths and injuries worldwide." The group also used its German base to propagate anti-Semitism, and calls for Israel's destruction.

Hizballah leader Hassan Nasrallah condemned Germany's ban describing it as a "political decision that reflects Germany's submission to America's will and to pleasing Israel." "When we say we are not active in Germany, we are being 100 percent honest."

But the Lebanese terrorist leader lied, as Germany's domestic intelligence agency in 2019 estimated 1,050 Hizballah operatives were in the country. The operatives engaged in drug trafficking, trading in stolen cars and money laundering, according to a report in 2019 by German daily Tagesspiegel.

Adding to the threat is a wave of refugees from war-torn Syria and elsewhere who – because of the chaos back home – could not be properly vetted. Chancellor Angela Merkel is blamed for her decision in 2015 to allow into Germany more than 900,000 refugees from Syria who fled the Syrian civil war. She allowed these individuals into the country even though they likely included criminal and radical elements. "We must do everything we can to prevent this from happening again," former CDU leader and current Defense Minister Annegret Kramp-Karrenbauer said in 2019. "We have learned our lesson."

Similar sentiment came from Merkel's Interior Minister Horst Seehofer, who in 2019 demanded a "robust procedure" to screen refugees before they entered Europe. But the extremist challenge preceded the refugee crisis – even some Syrian immigrants were shocked to find that mosques in Germany are more radical than their own home country.

Security in Germany deteriorated following Merkel's decision. "The quick decay of the security situation was mainly due to an unprecedented wave of terrorist plots hatched by Islamist terrorists culminating in an attack in Berlin on December 19, 2016," wrote German security expert Guido Steinberg in 2017.

Statistics show a spike in terrorist attacks following Merkel's decision in 2015, although it is unclear how much of that is due to newly-arrived refugees or radicalized German Muslims.

"Those who only fight extremists when they become terrorists have lost," warned German expert on Islamism Ahmed Mansour. The indoctrinators have to be identified and stopped.

"In Germany the danger posed by Islamist terrorism remains unchanged – the murder in Dresden recently made this painfully clear to us again," said Seehofer following October's knife attacks in France and Dresden.

Given the radical nature of Salafist adherents and how far they are willing to take the practical application of their beliefs and join terrorist organizations domestically and abroad, the German authorities still face a clear and present danger from such groups.