Rage: Narcissism, Patriarchy, and the Culture of Terrorism 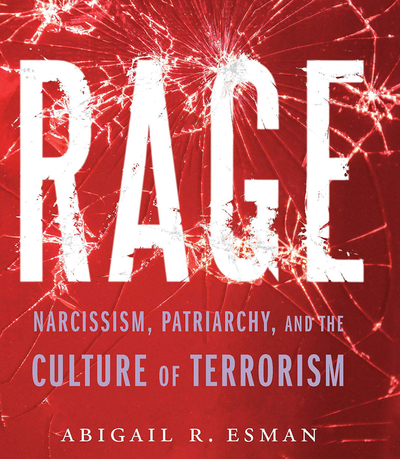 What goes on behind closed doors is no one's business. Until it is.

Rage: Narcissism, Patriarchy, and the Culture of Terrorism by Abigail R. Esman is gripping, fast paced, deeply personal, and thoroughly shreds social decorum. Esman, a contributor to the Investigative Project on Terrorism, lays bare the personal traits and domestic abuse that can be used to forecast radicalization and accurately assess intent to commit acts of terrorism.

The terrorism and domestic violence numbers are stark. Esman notes that, in 2017 alone, more than 26,000 people died due to terrorism around the world, most in the Middle East. Contrast that with over 10 million men, women, and children in the United States who were victims of domestic violence that resulted in 1,500 deaths, in the same year.

Domestic violence and terrorism have the intent to terrorize the family or community. The purpose is to inject fear and control both in private and in public.

What moves someone from domestic violence to radicalized mass murders or terrorism and how society should respond is what makes Esman's book Rage an important contribution to understanding terrorism.

Esman writes, "millions of men (and women) around the world are raised without fathers, or with strict fathers and overindulgent mothers. Some (but not all) become pathological narcissists. And of those, some, but certainly not all, become terrorists, or beat their children or their wives. What is it that makes the difference?"

The book dissects one repulsive case after another to reveal common behaviors that left undeterred, can flourish and cause extraordinary terror.

Esman shows the similarities among the unlikely of cases of Osama bin Laden, Anders Breivik, James Alex Fields, Omar Mateen, and more. It is fair to ask what could these cases possibly have in common. Once the data is extrapolated, the links become clear and hard to hide again.

Esman identifies five target life events, phases, and personal choices that, when known, show how the level of the crime can be transformed from domestic violence to radicalization to mass murder. These significant phases include the death of a parent; divorce or abandonment of a parent; bodybuilding, wrestling, and/or military service; either the perpetrator or victim of domestic violence; and, plastic surgery.

For instance, Osama bin Laden experienced four out of five life events. His parents divorced shortly after he was born. He was one of 50 children his father had with possibly 10 or 11 wives. His father was killed in a helicopter crash piloted by an American when he was 10 years old. Esman writes, "Osama's reaction to his father's death surely also was filled with conflict and confusion. HIs father, however devoted, was also known to beat him cruelly. Was young Osama then, in the face of his father's death, relieved as much as he was grief stricken?" While a student at the University of Jeddah, Osama connected with a radical Islamic scholar, and later joined the Afghan resistance supporting the mujahideen with weapons and recruits.

In another example, Rage looks at Norwegian Anders Breivik, who killed 69 children and eight adults at the summer camp on Utoya. Breivik was an only child. His parents separated when he was "barely a year old," and he was raised by his mother. Breivik had a "bizarre relationship with his mother, who at once repelled him but with whom he was at the same time pathologically intimate, literally climbing on top of her to kiss her," Esman writes. "As a child, even by the time he was four, social workers had intervened twice, concerned about possible sexual abuse by his mother, who slept with him in her bed. And yet that same mother was also known to hurl verbal abuse at her son, telling him (frequently) she wished he were dead."

Esman describes him as "Self conscious and vain." He was obsessed with his appearance. He had plastic surgery, took testosterone supplements, wore makeup, and was a known body builder.

Esman turns to expert psychologists to identify these common threads that lead perpetrators from rage expressed privately at home to the public stage. Their sense of shame, fear, honor, control, or a desperate need for attention and respect can transform into pathological narcissism and violence on the world's stage.

She cites psychologist Susan Heitler who notes that, "Terrorism is a large-scale version of domestic violence."

Insight is drawn from Soraya Chemaly, who wrote in the Huffington Post, "the greater the polarization of gender in a household, the higher tolerance there is for violence and oppression and the greater the violence experienced by women and girls in those households, the greater the likelihood of militarization and national violence."

Often times gender imbalance, violence, and oppression within the home are invisible until there is no way to conceal the bruises and trauma. Heitler notes that "in cultures and countries that produce terrorists, rates of domestic abuse are very high. ... The belief that dominating others via violence is a legitimate way to act pervade homes, the religious arena, and the behaviors of governments toward both their citizens and toward neighboring countries."

Esman shares her own personal experience in abusive relationships that is gut wrenchingly difficult to read, but it also clearly demonstrates the dilemma of the abused and the abuser. Esman shares the response from one abuser that, "Everybody does it." On one side, the learned behavior to respond to a crisis by burying and shrugging off the abuse; and, on the other side, the learned behavior to manipulate and maintain control over the abused.

Who better than Esman, a terrorism expert and award winning journalist and author, to explore the links between domestic violence and radicalization.

Global public health managers should take note of the finding in Rage: The cost of inaction or tolerance in addressing gender imbalance or violence can be overwhelming to society. The ripple effect of radicalization can become insurmountable when one realizes that terror does not end with one person, family, community, or nation.

The data collected in Rage also demonstrates the urgent importance to upgrade the value of domestic violence by global and national counterterrorism agencies.

Esman also confronts social norms that promote hate for those who are "other" that are often perpetuated in families, schools, religious organizations, and, insular or vulnerable communities. This toxicity is evident in every society, faith, and, country.

Esman leaves the reader with the reality that, "if we hope to end extremism in our communities, we must end the extremism in the ways we raise our children. They are neither little gods nor tiny devils. They need be neither worshipped nor destroyed. Whatever their gender. Wherever they are born. Wherever they are raised." Transparency and gender empowerment become important tools in combatting radicalization.

Rage is essential reading for those who fight extremism. Esman eviscerates society's tolerance of domestic violence as if it is an anomaly and positions these crimes as strong indicators for potential more violent crimes.

Keri Douglas is a strategic communications professional who writes on international affairs, innovation, and cultural heritage. Her career includes serving as a presidential writer at the White House and as press secretary at the Embassy of Switzerland covering legal, political, and scientific issues.