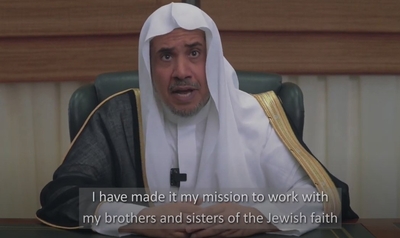 "We have repeatedly seen how we share the same concerns around growing intolerance and the same threats [from extremists] facing each of our communities," he said. "But also we share the same determination to build a more tolerant and peaceful world – a world ruled by a just and all-encompassing peace."

So, of course, Al-Issa, secretary general of the Muslim World League, is being attacked by Islamists, led by those on Qatar's state-owned network Al Jazeera.

Senior Al Jazeera anchor Ahmed Mansour on Saturday mocked a video showing Al-Issa in Auschwitz last January and receiving an award for his efforts in combating anti-Semitism. "We congratulate Saudi Sheikh Mohammed Al-Issa, Secretary General of 'The Association of Bin Salman,' for the warm hospitality of the Zionists and their honor and grant him the Great Medal of the Zionist?!" 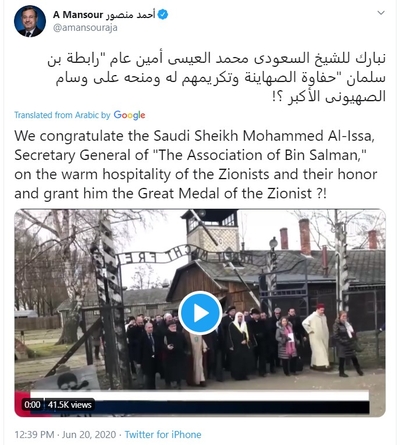 A week earlier, the Al Jazeera anchor mocked Al-Issa's calls for coexistence between Muslims, Christians and Jews. "We are proud in the Muslim World League to carry the responsibility with Jews and Christians brothers and sisters to build understanding, love and harmony between followers of all faiths," Al-Issa said.

To Mansour, this raised a question whether "The general secretary for the Muslim World League is calling for a new religion?!!"

Al Jazeera's Arabic website printed an article criticizing the Saudi cleric for speaking to a Jewish organization without mentioning the Palestinian cause.

For years, Issa stepped up the rhetoric against Islamism. "There is no place for political Islam anywhere in France or any other [country] because it does not uphold neither religion, nor national values nor respects the laws and constitutions of countries but only the political agendas and ideology of Islamists," he told France 24 in March. "You have to respect the constitution, the laws as well as the culture as long as you are resident of a country. Otherwise find yourself a different country that suits you."

Al-Issa's stance for rapprochement with Jews irked Palestinian Islamist writer Yasser Zaarteh. "The Secretary General of the Muslim World League continues to preach the extending of bridges of dialogue and bonds of partnership between Jews and Arabs," he wrote earlier this month. Israeli Army spokesman "Avichai Adraee and the Zionist entity's websites are celebrating the statements! At the height of Zionist arrogance comes this free normalization with Israel."

Mauritanian Muslim Brotherhood writer Mohamed Shanqiti mocked Al-Issa for calling Jews his brothers. "Issa and Sheikh Yusuf Al Othaimeen have no love in their hearts for the Muslim Brotherhood as it is filled now for the Jewish Brotherhood," he tweeted. "For how long the Muslim World League will be run by the hypocrites of the devil."

Egyptian Muslim Brotherhood cleric and former MP Mohamed Al Sagheer on Saturday criticized the visit to Auschwitz by Al-Issa and other Islamic clerics, tweeting, "Can Muslim clerics remain under the leadership of Al-Issa after these acts which he only represents himself?"

Palestinian Al Jazeera anchor Tamer Al-Mishaal also mocked Al Issa for talking "[w]ith such enthusiasm ... about your Jewish brothers as you described them" and challenged Al-Issa to "deliver a speech in support of the steadfastness of the people of Jerusalem in the face of the ongoing campaign of Judaization against the first of the holy sites well as part of the long series of Zionist crimes against the people of Palestine, Arab and Islamic countries as you are Secretary-General of the Muslim World League !!"

Other Qatari state media outlets beyond Al Jazeera went after Al-Issa. "The head of the 'Muslim World League' appeared to promise to tackle anti-Semitism and hatred and cry over the Holocaust," the women's magazine Meem tweeted, "... so the Foreign Ministry of the occupation [Israel] applauded him with great joy ... this is how the recruitment of clerics is done to promote the Zionist rhetoric and justify the occupation and the marketing of normalization."

Qatari media anchor Jaber Al Harami tweeted "Muhammad al-Issa ... cries over the Holocaust and considers it the most terrible of human history, while Zionist crimes against the Palestinian people and the rape of Jerusalem does not deserve to be mentioned."

The criticism extends beyond the Gulf States.

Official Turkish media outlet TRT Arabic posted a video casting Al-Issa as wrong for visiting Auschwitz and gaining praise from Israelis – who should be seen as the enemy. The video included statements accusing Al-Issa of normalizing relations with Israel and ignoring the crimes against Palestinians.

In response to the attacks, Al-Issa told Al Arabiya news networks, that "no one is looking to merge religions."

There's a clear message being sent here. If a Muslim, especially a Muslim cleric, expresses anything short of hostility toward Israel, or acknowledges and laments the Holocaust, the Islamists in Qatar, Turkey and elsewhere will pounce. It exposes both countries' false political narrative of establishing good ties with Jews and Israel while endorsing the complete opposite narrative in their state-owned media.