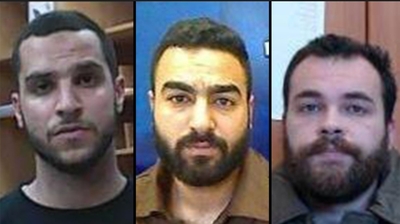 Ahmad Sajdaya from the West Bank's Qalandiya refugee camp has a history of building explosive devices for terrorist attacks. Years ago, he reportedly lost part of his hand in a bomb-making accident. But that gruesome accident did not stop the Palestinian, now 27, from planning to kill Israelis.

Israeli authorities arrested Sajdaya last month along with two other Palestinians suspected of plotting major terrorist attacks in the West Bank and Jerusalem on behalf of Hamas.

The suspects, males in their mid-20s, initially planned to set off a bomb in Jerusalem's Teddy Stadium soccer arena, according to a statement last Wednesday from the Shin Bet – Israel's domestic security service. One of the cell members, Umar Eid, had an Israeli identity card – which allowed him to enter Jerusalem from the West Bank to attend a soccer game at Teddy Stadium on a reconnaissance mission last year.

The men conducted surveillance and other preparatory measures but ultimately scrapped the original plan after assessing that the stadium was too heavily protected.

The cell relied on online bomb-making instructions and bought ingredients required for building explosive devices, including chemicals, nails and other metallic parts to maximize casualties. Eventually, the terror cell shifted its focus on planning bombing attacks targeting Israeli soldiers in the West Bank and several other sites around Ramallah.

The suspects originally met as student members of the Hamas-affiliated Kutla Islamiya group in the West Bank's Birzeit University and were involved in several other attempted bombings in the past. Rahman Hamdan, a Ramallah-based Kutlah Islamiyah official, allegedly helped finance the terror cell and facilitated direct contact with Hamas.

Last year, Israel foiled another cell directly tied to the Hamas student association and discovered a fully-built bomb in the process. Gaza-based Hamas figures seek out talented students who are motivated and capable of building bombs. The terrorist organization also instructs its recruits to mobilize other students and young Palestinians to form cells in the West Bank.

The latest arrests highlight the dangers of Hamas's West Bank terrorist infrastructure, among educational institutions and beyond. Over the years, Israel has foiled numerous deadly Hamas-directed attacks, including kidnapping attempts in the West Bank and within Israel.

Israeli authorities disrupted another elaborate Hamas plot in 2017. According to the subsequent indictment, Hamas officials in Gaza sent instructions to a three-man terrorist cell via Facebook, explaining how to carry out shooting attacks, detonate explosives, and coordinate kidnappings around Hebron.

That cell also scouted several locations within Israel for future attacks, including a bus station in Afula, a military base, the Binyamina Train Station, and a synagogue.

The terrorists involved in that plot gained important information about the targets while working in Israel illegally.

Terrorist organizations, including the Islamic State, Hizballah, and Hamas continue to use social media outlets to direct or encourage cells in other theatres to attack their enemies.

However, these cases, including the Teddy Stadium bomb plot, illustrate the major threat posed by terrorist operatives who can infiltrate into Israel either illegally or with genuine Israeli identity cards.

The latest developments show that Hamas remains committed to expanding and consolidating its terrorist infrastructure in the Palestinian territory in an effort to destabilize the Palestinian Authority and infiltrate Israel for attacks.