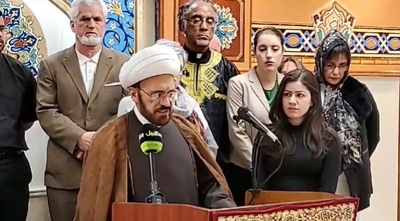 Soleimani ran the IRGC and served as the Iranian regime's primary liaison with Islamic terrorist groups across the Middle East including Hamas, Hizballah, the Popular Mobilization Unit (PMU) militias in Iraq, the Houthis in Yemen, and the Assad regime in Syria.

Imam Mohammad Ali Elahi's regime ties were never mentioned in the Detroit News' story. Instead, Elahi, imam at the Dearborn Heights-based Islamic House of Wisdom, was presented as just another concerned cleric.

Ayatollah Khomeini reportedly appointed Elahi as head of the "ideological and political department" of the Iranian Navy in 1979 after the revolution.

Elahi wrote on the Islamic House of Wisdom's Facebook page that he was close to former Iranian President Hashemi Rafsanjani, with whom he spent time in prison under the shah. Their friendship continued after he became president of Iran, Elahi claimed.

He met with former Iranian President Mohammad Khatami during a March 2017 trip to Iran, describing a "friendly conversation" about Khatami's eight years as president and his memories of Ayatollah Ruhollah Khomeini.

Elahi also met with current President Hassan Rouhani in 2014 as part of a delegation of American Muslim leaders.

Elahi's mosque celebrated the 35th anniversary of Iran's 1979 Islamic Revolution in 2014, complete with a cake. Elahi praised the late Khomeini as a man of political vision and faith.

Fadlallah advocated suicide bombings during Lebanon's civil war in the 1980s. U.S. officials suspect he was connected to the 1983 Beirut Marine barracks bombing.

"Suicide," Fadlallah said, "is not an absolute value. It is an option left to a people who are without options, and so the act is no longer considered suicide but martyrdom in the name of self-defense. This is part of the logic of war."

In comments last week, Elahi falsely presented Iranians as unified behind the regime despite nearly two years of tumultuous protests against the Islamic Republic. Iranian authorities killed at least 1,500 protesters in November.

Elahi pointed instead to mass protests after Soleimani's death.

"Did you see the flood of millions and millions of Iranians follow the funeral of their general all of over the country. What did you really achieve by that attack?" Elahi asked. "That is so sad and unfortunate and adding more sanction pain and punishment, the travel ban, murdering the Iranian children in the hospitals because of your economic war considered as a way you show love. Is that the way you show love for people that you respect and call them remarkable?"

However, these demonstrations were orchestrated by the regime, a column in the Washington Post said. "Students, public servants, and shopkeepers were forced to attend," Iranian journalist Maseh Alinejad wrote. The regime bused thousands of IRGC supporters to the funeral.

Iranians showed that they don't blame President Trump for their misery after Iranian missiles shot down a Ukrainian civilian airliner, killing all 176 people on board. Videos posted on social media showed people in Tehran tearing down Soleimani's portrait as had been done in previous protests. Another poster was vandalized with the words "Down with Khamenei."

"They killed our elites and replaced them with mullahs," protesters chanted at Sanati Sharif University in Tehran. Others chanted, "IRGC, Basiji, you are our ISIS."

Elahi's news conference invective ignored the assault on the U.S. Embassy in Baghdad by Kitaib Hizballah, an Iraqi Shiite militia controlled by Soleimani's IRGC Quds Force. Members of the militia pledged their loyalty to Soleimani during the assault and even scrawled his name on the wall of the U.S. Embassy compound. One graffiti tag said, "Our Leader Qasem Soleimani."

The speakers claimed that Soleimani's killing brought the U.S. and Iran to the brink of war.

Shireen Smalley of NIAC, the largest pro-regime lobby group in America, complained that Soleimani was labeled as a terrorist even though his entire job involved spreading violence in the name of expanding Iran's Islamic revolution.

CAIR Michigan Executive Director Dawud Walid and AACRL Board Chairman Nasser Beydoun complained that Iranian-Americans and other Muslim Americans were experiencing civil rights violations as a result of the latest escalation with Iran.

"We know that directly after the drone strike that killed Gen. Soleimani, that [a] little over 60 people of Iranian descent, Iranian-Americans were held coming across the border," Walid said. They were questioned about their religious beliefs, their political ideas as well as asked for their names first and last names of their family members.

Walid has downplayed Iranian terror threats in the past, dismissing federal indictments related to a 2011 Soleimani-linked plot to kill the Saudi ambassador to Washington as a hoax.

"If [then-Attorney General Eric] Holder hadn't announced so many 'foiled' plots that were really FBI provocateur led, I'd be more inclined to believe this #Iran plot biz," Walid said.

Siblani, an open supporter of Iran's terror proxy Hizballah, in 2013 condemned Western countries opposed to Hizballah's involvement in Syria and Iraq as "hypocrites."

"This is unbelievably irrational, arrogant and insulting to anyone that have (sic) a half brain," Siblani wrote on Facebook. "(Hizbullah, Iran and others and asking them to stop intervening and leave Syria!!!!!!), really! What a bunch of outlaw hypocrites."

Siblani called Hizballah members "freedom fighters" and refused to call them terrorists in a 2007 interview with CBN News.

Some of the news conference participants who condemned the U.S. strike that killed Soleimani claimed they were simply concerned about the Trump administration's policies, but a further look shows that they have been overt supporters and apologists for Iran and terrorists.