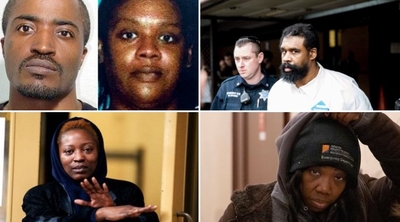 On the Upper East Side, strangers talk to one another: on grocery lines, in restaurants, leaning over tables.

"In New York!" they say. "I never would have imagined in New York."

They are talking about the rash of attacks on Jews in and around New York City in the last days of December.

"New York was where it was always safe," they say, and nod at one another in agreement.

No more. What the Hanukkah attacks in New York City and its suburbs have made clear is that nowhere is safe, now, for the Jews.

"We are all Israelis now," says my friend Phyllis Chesler, author of The New Anti-Semitism.

Not really. Israel identified the threat to its existence long ago. In America, we've just discovered a brand new one. The book that Chesler published more than 16 years ago is now officially outdated: we have entered the era of the New New Anti-Semitism, and it's nothing like what we've seen before. True, white supremacists and Muslim extremists continue to endanger Jews wherever we may be. But the New New Anti-Semitism comes instead from black American extremists, and they are radicalizing before our very eyes.

And so not surprisingly, for many New York Jews, the moment also holds shades of 9/11: "Who are they?" "Why do they hate us?" "Are we safe, walking in the streets? At our local stores? In our synagogues and schools?"

Similarly, just as most Americans knew little of al-Qaida before that bright September day, most American Jews have little awareness of groups like the Black Hebrew Israelites that are helping to propel the hatred and the violence that have caused more than 1,850 anti-Semitic incidents in the United States in 2019.

But the Hanukkah attacks make it clear we need to start paying more attention. Because although it isn't pretty to say so, in the words of Michael Benjamin, a black Jew writing in the New York Post, political leaders "need to address the elephant in the room — that the suspects in these heinous acts are black."

And while only the two shooters at a Jersey City kosher market who killed four people before being killed by police are known to have been connected to the Black Hebrew Israelite movement, others, such as Grafton Thomas, who knifed five celebrants at the home of a Monsey, N.Y. rabbi on the seventh night of Hanukkah, have indicated at least a passing interest in the group. And Larry Greene, aka Elijah Israel, who attacked two people leaving a Miami synagogue in October, also reportedly "self-identified" as a black Israelite. Worth noting: not a few Muslim terrorists, such as Pulse nightclub shooter Omar Mateen, similarly "self-identified" with ISIS and other terror groups.

More significant, though, is the fact that so many others have not been linked to the movement, offshoots of which have been defined by the Anti-Defamation League (ADL) as "extremist," "anti-Semitic," and "racist": Tiffany Harris, who punched and cursed at three Orthodox Jewish women in Crown Heights; Ayana Logan, a homeless woman who swung a handbag at an Orthodox woman in her 30s in Gravesend, N.Y., screaming "You fucking Jew, the end is coming for you!"; Steven Jorge, who punched a 65-year-old Jewish man in midtown Manhattan on a weekday morning, crying "Fuck you, Jew bastard!"; Darryl Jacobs, who threatened to bomb Jews in Jersey City a day after the kosher market slaughter; Urias Suero, who entered Chabad world headquarters on Eastern Parkway, Brooklyn one Friday morning and threatened to "shoot up the place and kill everyone"; and more.

Yet as the New York Post observed, "Blacks comprised seven of the nine-anti-Jewish hate-crime perpetrators arrested during the third quarter." Black-on-Jew violence and harassment, in other words, has become a significant and growing threat.

Why? Are there unrecognized links between these attackers and fringe groups of the Black Hebrew Israelites? Have investigators missed connections between them and Louis Farrakhan's anti-Semitic, black supremacist Nation of Islam? Or is there something else inflaming African-American rage against the Jews?

Arguably, a combined growth of the two movements, both of which declare blacks the superior race and vilify Jews as Satan-worshippers, may have helped bring anti-Jewish sentiment to the fore within elements of the African-American community in much the same way that Trump and the rise of the alt-right have – arguably – stimulated anti-black, anti-Muslim, anti-Semitic and other racist sentiment among many American whites. Both Farrakhan and the Black Hebrew Israelites insist that black people are the true children of Israel, that white Jews are responsible for the transatlantic slave trade, and that Jews continue to oppress blacks in their efforts to rule the world.

As both increase their proselytizing efforts, their audiences are growing – if not for their religion, then for their messages of hate. Add to this the incendiary anti-Israel and borderline anti-Jew rhetoric from politicians of color such as Ilhan Omar and Rashida Tlaib, who have, among other things, likened Israel to Nazi Germany, and the anti-Semitic tropes that fill the occasional rap song, such as "4:44" by Jay-Z: "You wanna know what's more important than throwin' away money at a strip club? Credit/ You ever wonder why Jewish people own all the property in America? This how they did it."

At the same time, none of this is entirely new. Past ADL studies, as Chesler herself has pointed out, have shown anti-Jew sentiment among blacks to be nearly twice as high as it is among non-blacks. Indeed, this animosity against Jews by blacks is woven into the fabric of America's history. As early as 1948, James Baldwin wrote in Commentary magazine:

"Both the Negro and the Jew are helpless; the pressure of living is too immediate and incessant to allow time for understanding. I can conceive of no Negro native to this country who has not, by the age of puberty, been irreparably scarred by the conditions of his life. All over Harlem, Negro boys and girls are growing into stunted maturity, trying desperately to find a place to stand; and the wonder is not that so many are ruined but that so many survive. The Negro's outlets are desperately constricted. In his dilemma he turns first upon himself and then upon whatever most represents to him his own emasculation. Here the Jew is caught in the American crossfire. The Negro, facing a Jew, hates, at bottom, not his Jewishness but the color of his skin. It is not the Jewish tradition by which he has been betrayed but the tradition of his native land. But just as a society must have a scapegoat, so hatred must have a symbol. Georgia has the Negro and Harlem has the Jew."

Few, apparently, paid much attention. In 1961, however, Commentary again noted "a revival of anti-Semitism among blacks."

Yet more than 70 years after Baldwin's courageous discourse, things have only gotten worse. True, after the Monsey bloodshed, some African American leaders began speaking out.

But is that enough? As Michael Benjamin wrote: "I'm unsure where this strain of anti-Semitism is coming from and why now. But I know that we need to call it and the perpetrators by name if we are going to eradicate it... But most of all, African Americans owe it to our Jewish neighbors, co-workers and friends — as well as to our children and their children — to stand up forcefully to the anti-Semitism that is percolating to the surface in our community."

The truth is, no one really is standing up "forcefully." And few are willing to come forward and "call it by its name." Not even the Jewish community itself.

Understood: It isn't comfortable. It feels wrong. We fear escalating the hatred against a minority group that we, as Jews, have long taken the lead in protecting.

But let's be honest. This didn't happen overnight. Over the decades, the tensions and the hatred have worsened, festering precisely because it wasn't a comfortable conversation. Now none of it can be fixed with just a statement. We need to stand up, all of us, to recognize those uncomfortable truths, and, together, change them.