This article originally was published by The Levant. 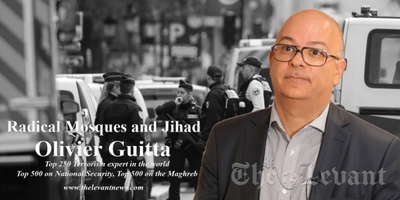 On 3 October, a French police IT employee, at the Paris Police HQ, stabbed and killed four of his colleagues, beheading at least one of the victims.

The killer, that had been in the police for 16 years, had a security clearance, had converted to Islam years ago. He showed signs of radicalisation, expressing support for Islamist actions, his reluctance to have contact with women and justification of the 2015 AQAP Charlie Hebdo attack. French Authorities found in one of his USB keys data that contained Islamic State beheading videos, and proof of close contact with a Salafist imam.

Yet again, in the case of this latest jihadist attack in Europe, there is a link to a radical mosque.

Indeed, the French jihadist behind the attack on the Paris Police HQ had been attending for years a mosque controlled by the Muslim Brotherhood.

Furthermore, the imam of the mosque was on France's Terror watch list since 2015, one year after he came from Morocco. Despite that he was allowed to stay in France and spread his poisonous propaganda. The examples of radical mosques linked to jihad number in the dozens: from the Hamburg mosque where some of the 9/11 hijackers radicalised to the Finsbury mosque in London that was the magnet of lots of jihadist figures in the early 2000's. As Louis Caprioli, the former head of Counter Terrorism at the French intelligence services, said "behind every Muslim terrorist there is a radical imam".

For proof, the Kouachi brothers that carried out the Charlie Hebdo attack were radicalised in a mosque in Paris 19th arrondissement. One of Islamic State French suicide bombers of the November 2015 was radicalised in mosque in Chartres. The terrorist behind the Amsterdam to Paris high-speed train attack, foiled by US passengers, was radicalised in a Salafist mosque in Algeciras. That's not just France: even in quiet Switzerland, the Petit Saconnex mosque in Geneva has been a vehicle of radicalisation.

The most dangerous Swiss jihadist present in Syria was radicalised there as was one of the Swiss nationals arrested for the murder of two Scandinavian girls in Morocco. Incidentally two of the imams officiating there were on France's terror watch list. Still in Switzerland, the imam at the Winterthur mosque was arrested for calling to kill Muslims who do not attend prayers. In the UK, the Manchester mosque that Salman Abedi, the Manchester Arena jihadist, attended, was headed by a radical imam that influenced five youngsters to join ISIS. Some of his sermons called for armed jihad. In another case, a Birmingham radical imam was arrested for recruiting jihadists. Coincidentally, he was preaching at a mosque that one of the Bataclan jihadists attended.

In Belgium, OCAM, the government outfit to assess the level of the threat, warned in 2018 that the school within the Brussels mosque was teaching armed jihad. In Kosovo, a whopping 22 mosques were openly calling to join the jihad in 2015 in Syria. Unsurprisingly, the imam at the main mosque of Pristina was convicted for recruiting jihadists for ISIS.

But of all the cases in European jihad, the Barcelona/Ripoll terror attacks is in a way the most stunning. The mastermind behind the attack was the Moroccan imam of the mosque in Ripoll. He was linked to the 2004 Madrid al-Qaeda attack and died mishandling explosives the night before the Barcelona attack. Rather than just radicalising his followers, he had decided to be the leader of an ISIS operational cell and die as a "martyr".

As proved here, despite all the talk about radicalisation online, time and again extremist imams are behind the radicalisation of many Muslims that can lead some to carry out terror attacks or join Islamic State. The European Union Commission on Terrorism of the Parliament wisely advised to set up a list of all the radical imams to be shared between the European countries. Yet, so many radical imams are still preaching in Europe unbothered.

At the source of this radicalisation are very well-funded, extremely well-organised Islamist movements.

For example, Salafism has expanded in Europe recently: from Belgium, where the federal state security agency has listed more than 100 Salafist organisations active in the country to France where the number of Salafist mosques has grown from 15 in 1990 to 60 in 2015 to 200 in 2019. Sweden is not spared as well, according to the report "Between Salafism and Salafi Jihadism", the number of Islamist extremists over the past decade there has grown tenfold, from 200 to 2,000. The German Office for the Protection of the Constitution recently warned that the largest most influential Islamist organisation in the world, the Muslim Brotherhood, is now a greater danger to Germany than the Islamic State and al-Qaeda.Indeed, while going after the operatives is a must, the West needs also to have an arsenal to target the ideological terror masters. In fact, inciting terrorism has a multiplying effect: a smart preacher can "hire" tens or hundreds of jihadists. In short to make an analogy with drugs, should we go after just the user or the dealer or both? Unfortunately for the time being we have mostly gone after the user.

Olivier Guitta is the Managing Director of GlobalStrat, a security and geopolitical risk consulting firm for corporations and governments. Olivier tweets @OlivierGuitta