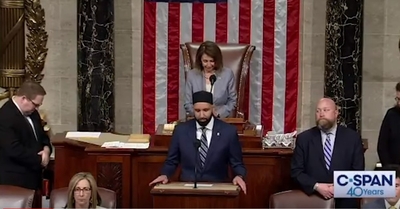 Islam's holy month of Ramadan began Sunday, so it's not surprising that the U.S. House turned to a Muslim cleric to provide Thursday's invocation.

The problem is with the cleric chosen. Omar Suleiman is a conservative imam who has a history of spewing hatred toward Israel and who holds views about gays and women that would spark outrage on the left if they came from a preacher of any other faith.

Suleiman is the founder and president of the Irving, Texas-based Yaqeen Institute for Islamic Research. U.S. Rep. Eddie Bernice Johnson, D-Texas, invited him to give Thursday's invocation, a Yaqeen Institute statement said.

Suleiman's honor of giving the invocation was touted by Zahra Billoo, a California chapter director for the Council on American-Islamic Relations (CAIR) and among the most rabid Israel haters among CAIR's stable of Israel haters. 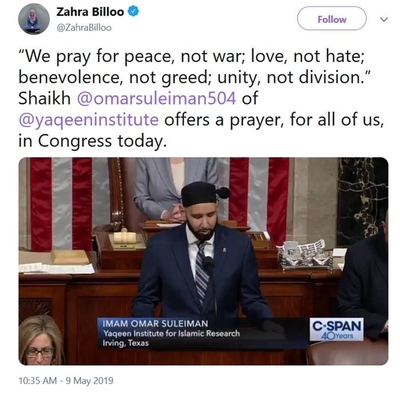 "We pray for peace, not war," he said. "Love not hate. Benevolence, not greed. Unity, not division. And we commit ourselves to not betraying our prayers with actions that contradict them. Let us be for truth, no matter who, or for is against it."

Love, not hate. Unity, not division. Here are some examples of Suleiman doing anything but advancing those ideals.

There is evidence dating back years to prove the practice takes place. And a Hamas official openly admitted the practice more than a month before Suleiman's post. "The fact that people are willing to sacrifice themselves against Israeli warplanes in order to protect their homes, I believe this strategy is proving itself," said Hamas spokesman Sami Abu Zuhri. 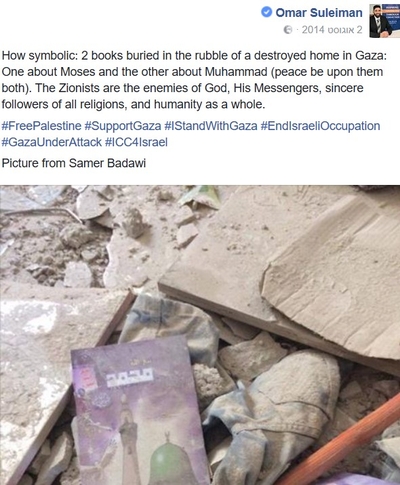 In his remarks Suleiman rejected any Jewish claim to Jerusalem: 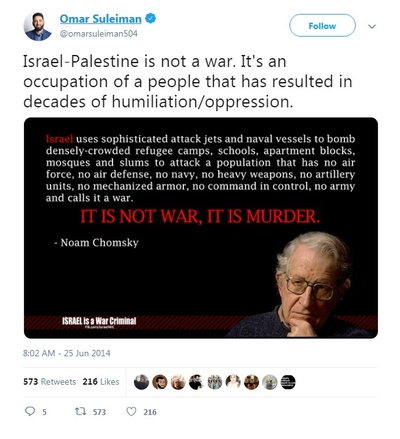 On social issues, Suleiman's conservative religious views stand in sharp contrast to the progressive ideas championed by most members of the House Democratic Caucus. The Middle East Forum put together several examples in a 2017 video. Two indicate a sexist attitude.

"And Allah doesn't just own 20 guns. Allah owns hellfire," he said. "So you'd better be careful. You're overstepping your bounds. Sisters ... you know what happens with a really jealous Dad? He kills you and he kills the guy. So you are offending Allah ... whenever you make yourself promiscuous or whenever you open yourself up to a relationship."

"See all the guys know it. You guys know this. Right? You can make this up and you can try to fool yourself or fool someone else. But girls, trust me. We're men. We're not going to lie to you. Guys and girls cannot be friends, unless you guys have been neutered ... you cannot be friends."

"... We believe it's wrong. It's obviously harmful to society. Obviously it's not natural, because of human reproduction and all the diseases and things of that sort that come as a result. But, if someone is a homosexual, they're not a, it's not, you know what's worse, homosexuality or saying Allah has a son? You see we still treat people who say Allah has a son with goodness, and we should. We should be kind and courteous and try to help them with that wrong idea or that wrong practice. Now what if someone says, 'But what if someone is born that way, what if someone is a homosexual and they can't help that?' Then we would say that not every impulse is to be acted upon. OK? We don't allow bestiality. We don't allow incest."

Imagine the blowback if a Republican House member invited a Christian preacher who uttered the same ideas. You don't have to. Liberal groups were outraged when President Obama asked Pastor Rick Warren to deliver an invocation at his 2009 inaugural.

When California Pastor Greg Laurie was named a co-chair of the 2013 National Day of Prayer, the Human Rights Campaign protested, saying his "message is out of step with what the majority of people of faith across this country believe."

The examples above show the same thing can be said about Suleiman.