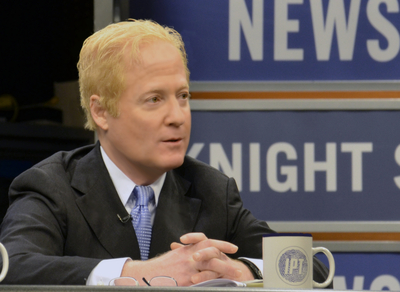 Steve Emerson might have had himself a lucrative career in law, or business, or investment banking, like so many of his fellow Ivy League graduates. He might have lived a comfortable life, con­structed around convention and financial security.

He didn't go in that direction. He left Brown University in the late 1970s and headed for Washington, D.C., armed with edgy skepticism of authority and a desire to make a difference. He has made a big one.

After a stint on Capitol Hill and a few award-­winning years in investigative journalism, Emerson wrote a groundbreaking expose of Saudi Arabia's vast leverage over corporate America, Washington public relations outfits and the nation's educational institutions, titled "The American House of Saud: The Secret Petrodollar Connection." The book launched Emerson's three decades as one of America's foremost experts on radical Islam, terrorism and shadowy Middle East funding of extremism here and abroad, during which he has written and spoken widely and, more importantly, done the courageous, laborious, frustrating work of calling bad, often dangerous, actors to account.

Twenty-three years ago, Emerson founded the Investigative Project on Terrorism, which investigates the funding and operations of extremist networks. It has been a reliable source for law enforcement agencies, congressional committees and others. His work has been appreciated not one bit by extremism's indulgers; Emerson has almost always been right, and when on occasion he hasn't been, his enemies, well-funded with big megaphones, have tried to take him down. Their failure to do so is testament to Emerson's inexhaustible energy, monumental resilience and unwillingness to be intimidated.

Emerson has been relentless about warning of radical Islam's designs on the West, and about the urgency of confronting those designs rather than looking the other­ way, or pretending they aren't real. He was famously prescient in predicting 9/11 years before it occurred, earning derision from the predictable quarters. In his 1993 PBS documentary "Terrorists Among Us: Jihad in America," he decried the popular pretense that that year's World Trade Center bombing was somehow a onetime deal. As far as the media was concerned, he said, "all this was (was) a spectacular news event that is over. Is it indeed over? The answer is: apparently not. A network of Muslim extremists is committed to jihad against America."

In February 1998, he told the Senate Judiciary Committee, "The foreign terrorist threat in the United States is one of the most important issues we face. We now face the distinct possibility of mass civilian murder the likes of which have not been seen since World War II." Four months before 9/11 he wrote: "Al Qaeda is ... planning new attacks on the US ... Al Qaeda and other terrorist groups ... have silently declared war on the US; in turn, we must fight them as we would in a war."

Though Emerson himself would never endorse the comparison, he has been something of a modern-day Paul Revere, warning the West that radical Islam was not only coming, but already here. Unlike Revere, how­ever, Emerson has sometimes found himself vilified by those he was attempting to warn. The vilification has typically originated with a kind of Islamism lobby, funded by Middle Eastern entities and their allies, who have had a pronounced self-interest in shutting off any spotlight on the spread of extremist ideology and the tactics of those responsible for it. Whether it has been death threats or lawsuits leveled against him, or defamation of him, Emerson has declined to be cowed.

"It is from numberless acts of courage and belief," said Robert Kennedy, one of Emerson's heroes, in a speech delivered at the University of Cape Town in 1966, "that human history is shaped." In ways he could not have imagined when he left graduate school for the nation's capital some 40 years ago, Steve Emerson's acts of courage and belief have had a very big impact indeed, one which should fill him with satisfaction and pride.