The Terrorist Semi-States of Hamas and Hizballah 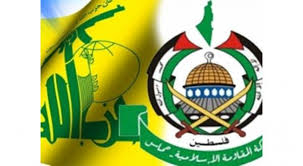 The terrorist threat Israel faces is an unusual one: the terrorist organizations seeking to destroy it control their own territory, making them a kind of semi-state.

The armed, fundamentalist entities situated on Israel's borders have control over their own land, and they govern populations. This creates an inherent contradiction between their hardline Islamist ideologies on the one hand, and their self-preservation interests on the other.

This paradox is playing out most visibly in the Gaza Strip. Hamas is trying to relieve the security blockade over its enclave, using a range of violent pressure tactics to achieve this goal, as it tries to avoid an economic meltdown in Gaza.

Yet it is unwilling to stop enlarging its arsenal of offensive weapons that it points at Israel, meaning that Gaza's economy remains dysfunctional.

Hamas has failed to prioritize Gaza's civilian needs, despite being the government. Instead of tackling unemployment, or doing whatever it takes to ensure a steady electricity supply, it is trying to intimidate Israel, and pressure the Palestinian Authority and Egypt into rescuing Gaza's economy. Unemployment in Gaza is at 44 percent, and it stands at more than 60 percent for young people, many of whom have university degrees. Most of Gaza's estimated 2 million residents have access to about four hours of electricity per day, and its water sources face depletion in the coming years.

If there is one thing Hamas fears most, it is a popular Gazan uprising against its regime, which an economic collapse could spark. Despite this possibility, it is unwilling to cease converting Gaza into a heavily armed Islamist attack base.

This dissonance is creating significant regional instability, and tensions between Hamas and Israel are now at their highest since the 2014 armed conflict. The two sides traded fire last weekend, with Hamas and Palestinian Islamic Jihad firing 200 short-range rockets and mortars at southern Israeli towns, and the Israel Air Force responding with strikes against more than 40 high-value military targets in the Gaza Strip. An Egyptian-brokered truce has since gone into effect, but it is shaky.

In Lebanon, meanwhile, Hizballah, a Shi'ite terror organization with one of the world's largest arsenals of surface-to-surface projectiles, continues to prepare for war with Israel. Hizballah's monstrous arsenal is a clear sign about who really runs Lebanon; estimates say one out of every 10 buildings in Lebanon has a rocket concealed in it. This arsenal is made up of Iranian-produced weapons smuggled into Lebanese villages and towns, especially in south Lebanon, home to 200 Shi'ite villages – villages that Hizballah has turned into bases of attack.

Hizballah is free to build up its arms this way, contravening UN Security Council Resolution 1701, which bans the presence of armed forces in south Lebanon, except the official Lebanese military, and a UN peacekeeping force. But since Hizballah controls this territory, it is free to flout international law with little consequence.

At the same time, Hizballah is diligently sticking to a 12-year ceasefire with Israel, showing no interest in sparking a conflict at this time.

This situation both reflects Hizballah's massive military power, which the international community has been powerless to do anything about, and its vulnerability.

Hizballah was heavily involved in the Syrian civil war, acting as an Iranian regional army sent in to rescue the Assad regime. Yet Hizballah lost between 1,500 to 2,000 fighters for its intervention, and thousands more were injured, spawning growing pressure from the organization's south Lebanese support base, home to most of those casualties. Hizballah leader Hassan Narallah has repeatedly had to justify the organization's presence in Syria. For example, Nasrallah has told his base that if the Assad regime falls in Syria, Hizballah in Lebanon will fall with it. Hizballah's war in Syria has led to a crisis in morale and funding, the Israel Defense Forces (IDF) Chief of Staff Lt.-Gen. Gadi Eisenkot said last year.

Hizballah's political and military domination of Lebanon shows its strength, but also helps explain its restraint, for Hizballah is reluctant to expose itself to Israel's firepower, or lose control of its turf.

A war with Israel would endanger both the survivability of Hizballah's senior leadership and its grip on Lebanon, factors that help hold it back. "Hizballah is deterred," former IDF Chief of Staff, Lt.-Gen. Benny Gantz, said in 2014, adding that it "knows what will happen if it gets into conflict with us, and that this will set Lebanon back decades."

Semi-states, but not normal states

In some ways, Hamas and Hizballah have come to resemble states, with their own hierarchical armed forces, political power, media outlets, and defined borders. Yet in other ways, they are anything but ordinary states, viewing their lands as bases of attack and their civilians as human shields. Their commitment to a long-term radical ideology of conflict against Israel, punctuated by opportunistic truces, remains paramount.

Their freedom to run their own areas also forces them to factor in risks. This has allowed Israel to influence and deter the decision-making processes of its foes, and prolong periods of truce in recent years, by deterring them. The ability to deter semi-state terrorist actors is key to understanding Israel's security.

"Our role is to first of all ensure the security of the citizens of the State of Israel, and to prevent wars as much as possible. And that occurs, first and foremost, through strengthening deterrence," Defense Minister Avigdor Liberman, said last year.

The Israeli defense establishment has used the quiet time to adapt the military to Middle Eastern hybrid forces. They are hybrid because they are part army, part guerilla force, and part 'classic' terror organization, all rolled into one. Such is the nature of terror organizations with territory.

The ensuing reality is that terror organizations in this area of the world now have weapons, such as GPS-guided missiles, that were once reserved for the great world powers. The flip side is that they can also be deterred from using them.

This complex reality is what faces Israel's defense establishment day in and day out, as it seeks to protect the country's civilians, prolong periods of calm, and prepare intensively for the day that conflict erupts.

According to Israeli intelligence assessments, these actors' self-preservation calculations mean they have no interest in deliberately triggering a full-scale conflict with Israel at this time.

Yet the unstable and unpredictable nature of the region means that even small incidents can uncontrollably snowball into wars, whether anyone wants them or not.

Once hostilities begin, Hizballah and Hamas can both fire projectiles at Israeli cities while engaging in high-level urban warfare tactics against incoming Israeli forces in their own lands.

The situation is made significantly more complex by the direct state-backing that Iran provides Hizballah, and, to a lesser extent, Hamas, as well as to the second largest armed faction in Gaza, Palestinian Islamic Jihad.

As the deputy commander of Iran's Islamic Revolutionary Guards Corps (IRGC), Hossein Salami, recently boasted, according to the Middle East Media Research Institute, Iran has created a "mighty power" in Lebanon, which points more than 100,000 rockets and missiles at Israel.

Salami also referred to Iran's ongoing efforts to build up a second armed force in Syria, made up of Shi'ite militias, which he referred to as "the Islamic Army of Syria."

To deal with this threat, Israel has developed a well-organized, hi-tech military to defend itself, which is currently busy adapting itself to the hybrid threat lurking on the other side of the border. The key to this adaptation lies in combining superior intelligence with precision firepower – a combination that the IDF is upgrading continuously.

In the meantime, Israel is sticking to its policy of deterring such actors, taking advantage of their vulnerability to make it clear to them that they should hold their fire.

This will not cause them to change their radical ideological DNA. Nor will it solve the dissonance that lies at the heart of a terrorist faction that has its own land. But it might put off a bloody conflict, and save suffering on both sides, for as long as possible.