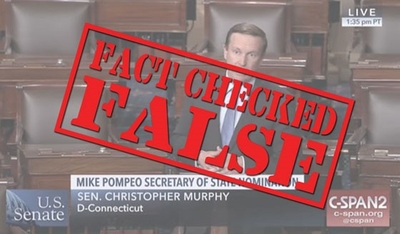 Some non-Muslim white folks seem to feel comfortable and well qualified to smear advocates for reform in Islam as "anti-Muslim."

The Southern Poverty Law Center smeared former radical Maajid Nawaz as an "anti-Muslim extremist" in a 2016 report. After several shifting justifications, the group had to eat the report last month, taking it off its website.

Now, a United States senator has called a devout Muslim and reform advocate "anti-Muslim" in remarks on the Senate floor. Chris Murphy, D-Conn., was explaining his decision to oppose CIA Director Mike Pompeo's nomination to serve as secretary of state last week. One reason, Murphy said, is Pompeo's "deeply intertwined" relationships with anti-Muslim groups including the American Islamic Forum for Democracy (AIFD).

The charge is as baseless as the SPLC's.

The AIFD has demanded an apology from Murphy for calling the group "anti-Muslim."

According to its website, "AIFD envisions a future wherein Muslims never feel a conflict between their personal faith and their commitment to individual liberty and freedom. Rather, we work to empower Muslims to be primary advocates for liberty and freedom."

Can't you feel the hate?

If you want to know what AIFD founder and President Zuhdi Jasser thinks about Muslims and Islam, it makes sense to read the Muslim Reform Movement's declaration of principles. Jasser helped create the group and craft this statement.

For the sensitive of heart, brace yourselves for some flaming-hot Muslim hatred:

1. We are for secular governance, democracy [and], liberty. We are against political movements in the name of religion. We separate mosque and state. We are loyal to the nations in which we live. We reject the idea of the Islamic state. There is no need for an Islamic caliphate. We oppose institutionalized sharia. Sharia is manmade.

Better than half the words in this excerpt are applications of the First Amendment. The rest does nothing to restrict anyone's right to worship, to practice Islam, in any way. If ever realized, nothing in the entire declaration inhibits a Muslim's rights in any way. There is zero hostility or enmity.

That doesn't mean Jasser isn't critical of political groups which claim to act in the name of Muslims. But if doing that is tantamount to telling "Americans that all Muslims are out to get them and that we are better off if we just shelter ourselves from people of the Muslim faith," then critics of the Catholic Church must also be guilty of anti-Catholic bigotry.

Murphy's statement was similarly off base with the other groups he named, including the Investigative Project on Terrorism (IPT) and the Middle East Forum (MEF).

Contrary to Murphy's assertion that it is anti-Muslim, the MEF points out that it "has given hundreds of thousands of dollars to moderate Muslim and anti-Islamist causes, working with moderate and reformist Muslim groups and activists all across the country."

Murphy included IPT among the groups he described in his Senate comments as having benign names, but dark missions, that Pompeo was "deeply intertwined" with.

We wish reality was different, but the IPT has never had a relationship with Pompeo of any kind.

We asked Murphy's office on Monday to provide the basis for saying Pompeo was deeply intertwined with the IPT. We also asked for specific examples to support Murphy's claim that IPT and the other groups he named "try to tell Americans that all Muslims are out to get them and that we are better off if we just shelter ourselves from people of the Muslim faith."

We have received no response.

While CIA director, Pompeo helped then-IPT Senior Fellow Pete Hoekstra, now the U.S. Ambassador to the Netherlands, secure the freedom of former CIA operative Sabrina DeSousa, who faced four years in an Italian prison after being convicted in connection with a 2003 rendition of a suspected al-Qaida cleric in which DeSousa denies involvement.

Two years ago, Hoekstra – a former U.S. House colleague of Pompeo's – wrote an op-ed praising Pompeo for remarks calling out an imam who was recorded praising Hamas. If those two episodes constitute "deeply intertwined," then Murphy is a linguistic revolutionary.

If expressing concern about radicalization among some Muslims, or opposition to political Islam, makes one anti-Muslim, then Sen. Murphy needs to add a prominent elected official to his list: Chris Murphy.

In a 2016 speech to the Council on Foreign Relations (CFR), Murphy described the challenges he saw in radical Islam. He described the way radical Wahhabi education and charismatic clerics can lure young Muslims into a life of jihad.

"A cleric from a nearby conservative mosque offers you a different path," Murphy said. "He tells you that your poverty is not your fault, but simply a punishment handed down to you because of your unintentional deviation from the true path of Islam."

You send your son off with the imam for an education. Soon, "He's a teenager, announcing to you that the only way to show true faith to Islam is to fight for it against the kafir, the infidels who are trying to pollute the Muslim faith, and against the Westerners who are trying to destroy it. He tells you that he's going off to Afghanistan, or Syria, or Iraq with some fellow students, and that you shouldn't worry about him because God is on his side."

Murphy criticized the emphasis Republicans placed on uttering the term, "radical Islamic terrorism," but acknowledged that Democratic Party leaders "do backflips to avoid using these kind of terms, but that ends up forestalling any conversation about the fight within Islam for the soul of the religion."

What's needed, he said, is "a real conversation about how American can help win the moderate voices within Islam, help them win out over those who would sow the seeds of extremism."

That's exactly what Jasser is trying to do through AIFD and the Muslim Reform Movement. Jasser even wrote a book called A Battle for the Soul of Islam: An American Muslim Patriot's Fight To Save His Faith.

"Wow, talk about schizophrenic," Jasser said after the IPT forwarded him a transcript of Murphy's CFR speech. "Sounds like he just reads what's put in front of him. The same person who called AIFD out could not have had these thoughts or statements."

Murphy obviously can support or oppose whomever he chooses. In this case, however, in criticizing someone he sees as unjustly smearing people, Murphy unjustly smeared people who, in many cases, may not differ from him as much as he'd portray it.