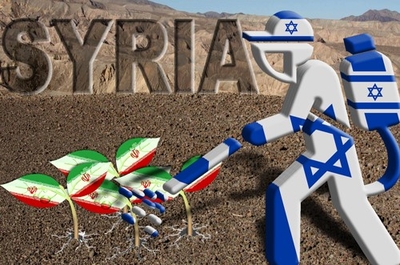 Tensions between Iran and Israel have risen significantly following a military strike on an airbase in central Syria this month that targeted an Iranian military presence. Iran blames Israel for the strike and is threatening to respond.

But this incident is merely a symptom of a much larger event unfolding in the region, which is Iran's pursuit of a grand, expansionist plan for the Middle East, and Israel's determination to disrupt this dangerous process.

What's clear is that several members of Iran's Islamic Revolutionary Guards Corps (IRGC) were killed in the attack on the airbase, and Iran quickly blamed the strike on Israel. Since then, Iranian officials have unleashed a series of threats, promising retribution.

In response, the Israeli defense establishment appears to have sent its own warning, reportedly releasing maps of Syria that show the location of Iranian military assets, thereby reminding the Iranians of what they stand to lose if this conflict escalates. Israel's Defense Minister, Avigdor Liberman, responding to a flurry of Iranian threats on Tel Aviv and Haifa, told a Saudi media outlet that any attack on Tel Aviv would be answered by a retaliatory strike on Tehran.

Yet these events, while indicating a surge in tensions, are actually part of a wider and more disturbing picture. Iran is following a grand, long-term plan made up of multiple stages, which is designed to make it the dominant Middle Eastern power, able to activate armies of terrorist-guerilla forces.

Iran is working patiently toward this goal, employing the 'strategy of a thousand cuts' to move into Syria.

Ideologically, Iran remains committed to the idea of exporting the Shi'ite Islamic fundamentalist revolution, as espoused by the regime, far and wide. From the start, it cast itself "as an Islamic Revolution for Muslims throughout the world."

The Islamic Republic continues to view the doctrine of its founding father and first Supreme Leader, Ayatollah Khomenei, as a cornerstone for its policies, Doron Itzchakov, a research associate at the Begin Sadat Center for Strategic Studies at Bar-Ilan University in Israel, told the Investigative Project on Terrorism. Khomenei preached "Shi'ite activism," and set up a regime based on defining the enemy as the West and Israel, Itzchakov said.

Khomenei also called for spreading the "Guardianship of the Islamic Jurist" model, which the regime in Tehran bases itself on, far and wide. Later on in his life, Khomenei called for the establishment of a "resistance axis," a call that today provides legitimacy for the IRGC's subversive activities across the region.

The Iranian regime also creates its own definition of "repressed" and "repressor," and uses that as a justification for spreading its influence and military activities, Itzchakov said.

Iran's religious elite use the Islamic Revolution of 1979, and the eight-year long Iran-Iraq war, as proof of divine backing, and they regularly make use of concepts of defensive and offensive jihad to justify Iran's activities, he added.

To be sure, some segments of Iran's population do not buy into the regime's position, and have recently become more emboldened to say so. Chanting "not Gaza, not Lebanon, I give my life for Iran," Iranian protesters, driven by major economic troubles, recently made it clear they oppose spreading out in the region and investing treasure for that purpose, before the protests were crushed.

Despite such protests, the Iranian regime continues to exploit deep-rooted hatred for Israel, a hatred that was embodied by Khomeini, as "a mechanism to prove that it is sticking to his path, and therefore, when it comes to Israel, there is a consensus among the various factions in the Iranian regime," Itzchakov added.

Iran relies heavily on Khomenei's tenets, but there is no doubt that its program to spread Iranian hegemony in the area stems "from geopolitical and geo-strategic motivations, which illustrate its ambition to lead the Muslim world," he said.

This strategy, if successful, would turn Iran into an actor to be reckoned with: a state able to control large swaths of territories beyond its borders. As part of that vision, Iran is creating a land corridor linking Tehran to the Mediterranean Sea, via Iraq, Syria, and Lebanon – a corridor it could use to move military forces and proxies.

The IRGC was once limited to being the overseer of ground operations in Syria, organizing, supporting, and advising the combatants fighting for the Assad regime. But now, it is attempting to set up its own permanent military presence in Syria.

Iran would like to flood Syria with more radical Shi'ite armed proxies, and insert its own military capabilities as well.

This vision, if left unchecked, could lead to the creation of Iranian air force bases, and naval ports appearing in Syria. The land corridor could be used to move Iranian military formations into Syria. All of this would turn Syria into one big Iranian forward base, allowing it to threaten Israel in an unprecedented manner.

Meanwhile, Iran seems willing to wait patiently for the nuclear deal to expire, so that it can reactivate the program from a position of greater military and economic strength, and eventually produce nuclear weapons.

Israel has no intention of letting this plan unfold. So far, most efforts to disrupt the Iranian activities in Syria have occurred quietly, and the Iranians have been too focused on pursuing their plan and consolidating their presence to get involved in a big fight with Israel.

But recently, Iran has been signaling a new willingness to escalate the situation. It sent an armed drone into Israel from Syria in February, launching it from the same T4 base that was struck this month. Rhetorical threats from Iran, which have been ongoing for years, continue with full force. Ali Shirazi, a senior aid to Supreme Leader Ali Khamanei, recently repeated an often-stated Iranian threat to destroy Israeli cities. "If Israel wants to continue its treacherous existence ... it should avoid stupid measures. If they give excuses to Iran, Tel Aviv and Haifa will be destroyed," Shirazi said.

Lebanon has already been lost to Iran. Hizballah is the world's most heavily armed and best organized non-state army. It utterly dominates Lebanon.

But Israel has determined that it cannot allow Syria to become a second Lebanon. Israel is determined to stop Syria from becoming flooded with Iranian missiles, rockets, terrorist cells, and Shi'ite militias.

Jerusalem has been using advanced air power and intelligence gathering to enforce its red lines.

Now, the ball is back in Iran's court and Tehran will have to decide if it is willing to risk crossing those lines again.