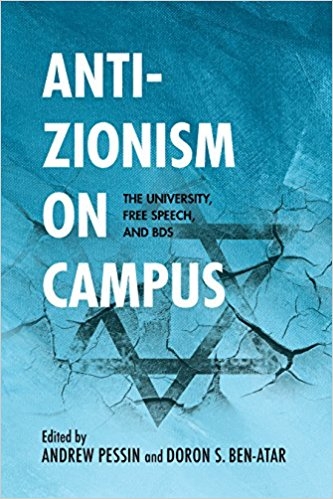 About six months after Andrew Pessin posted on his Facebook profile a defense of Israel during its 2014 war against Hamas, the once popular Connecticut College philosophy professor was subjected to an academic smear campaign. The school paper published articles defaming him. The administration hosted condemnations of Pessin from across the campus community on the school's website, and tolerated other anti-Semitic activities that only worsened the climate for Jews and Israel supporters. Pessin received death threats and, in the spring of 2015, took a medical leave of absence. The Connecticut College administration offered no meaningful protection or support to Pessin, and never issued any apology for its role in his abuse.

The Pessin affair was part of a growing trend of anti-Israel hostility on U.S. campuses, but at least his story has a somewhat happy ending. Pessin resumed teaching last fall after an extended paid sabbatical, and – together with a colleague – convinced the school to establish a Jewish Studies program. Moreover, he has edited a new book with Fordham University's Doron Ben-Atar on the general campus trend: Anti-Zionism on Campus: The University, Free Speech, and BDS. Ben-Atar, who is part of Fordham's American Studies program, protested at a faculty meeting about the 2013 passing of a resolution calling for a boycott, divestment and sanctions (BDS) targeting Israel, only to find himself soon being investigated for unspecified charges, resulting in a Kafkaesque campaign of intimidation and vilification. This volume of essays, by faculty and students who have confronted anti-Israelism on their campuses, documents and analyzes how this movement masks an underlying anti-Semitism that creates a hostile environment for Jews while undermining free speech and civility.

Q: Your book catalogues the many underhanded tactics used to promote the anti-Israel agenda on college campuses, which should help Israel advocates prepare for what awaits them. Did your personal ordeal inspire you to create a potential resource for campus Israel advocates? Or did you have the idea for such a book even before what happened to you?

Pessin: I had been observing the general campus scene for some time, but passively; like many professors, I preferred to spend my time teaching and doing my research, rather than get involved in the mess. And so, when I read about Doron's affair at Fordham, being persecuted for standing up for Israel, I simply thought, "That's terrible," then clicked on the next story. It was only six months later, when I began to receive hundreds of emails of support from around the world, that I realized how important it is to hear from people off campus. So I wrote to him, belatedly, to offer my support—and he wrote back immediately to suggest we collect narratives from faculty members who have been on the receiving end of anti-Israel nastiness on their campuses. Though the book evolved from there—we include several more analytical essays, as well as some narratives from students—that's how it was born.

Q: What would you say is the principal message of the book?

Pessin: The book is not about "defending Israel." Indeed, a good number of our contributors are people who are critical of various Israel policies, of settlements, etc. What it is about is how the anti-Israel movement manifests itself on campuses around the world. And as you work through the essays it becomes clear: the anti-Israel campus movement corrodes the academy in every way, on every level, it harms scholarship, teaching, community, it violates numerous academic and moral norms, and more. Whatever you specifically think about Israel and the Israeli-Palestinian-Jewish-Arab-Muslim conflict, the campus movement largely operates not as a bona fide academic movement but as something more sinister. There are legitimate ways to be supportive of the Palestinian cause on campus, but this isn't one of them. (Pessin exhaustively outlined legitimate ways to support Palestinians on campus in his 2017 article.)

Q: What factors did you consider when selecting the different contributors for this collection of essays?

Pessin: When we put out the original "calls for papers" we were shocked at the response. Within weeks we had some thirty faculty members who wanted to share their stories, of being targeted for standing up for Israel, or even for just not hating Israel. The problem is that pervasive. Most of these stories happen entirely under the radar, either on smaller campuses or in such a way that the media doesn't pick them. We tried to select the most compelling stories, the most representative stories, the ones that could teach people something. There were several we wanted to include but could not because legal procedures were in place that precluded their contributing. There was one who opted out because he didn't want to relive what was a devastating personal experience.

Q: What types of campus activity and speech, if any, should be suppressed (regardless of which side benefits), and under what principles? What, for example, is your view on the lawsuit against Fordham for refusing to allow a chapter of SJP [Students for Justice in Palestine] to form?

Pessin: That's a good question. We all believe in free speech. We all are opposed to hate speech. But does opposition to hate speech mean you may censor or restrict or punish hate speech? What about speech that consists of slander and defamation and demonization? The traditional norms of the academy suggest we should err on the side of the freedom, to hear all sides, even the evil sides. So nothing should be "suppressed," not even the most hateful, slanderous speech. But of course it should be answered. Lies should be countered, motives should be exposed, and while the simple label "anti-Semitic" can be abused (as can labels such as "racist" or "Islamophobic"), you shouldn't hesitate to explain and defend exactly how and why you take some particular speech or action to be anti-Semitic. As for Fordham, while I deeply respect the courage of that decision, I'm not sure in the end it was the right decision. Perhaps they should let the group form, but then closely observe its activities (as they observe all student groups) to be sure it operates within appropriate academic and community norms.

Q: Some anti-Israel activists argue that they are widely suppressed on campuses, and routinely maligned in the press and by organized Jewish and pro-Israel groups. What would you say in response?

Pessin: They do like to claim there is a "Palestine exception" [depriving Palestinian advocates of their free speech on campus]. And in the past few years Jewish and pro-Israel groups, both on and off campus, have gotten more vocal as they begin to take the anti-Israel movement more seriously as a genuine threat to Jewish students and to the academy in general. Indeed, we hope our book, by documenting the problem, will help inform and thus contribute to that response. The problem is that anti-Israel activists take nearly every criticism, every objection, every argument against them to be "censorship" and "suppression," rather than recognize these as academically appropriate responses to them. What they essentially want is unlimited freedom of speech to slander and defame Israel and pro-Israel faculty and students, while rejecting the freedom of speech of others to respond to them.

Q: Your sobering introduction highlights how the campus "debate" has become so extreme as to shut down any meaningful discussion in favor of assertions that, "Israel and Zionism are...illegitimate, incorrigible abominations" as you describe it. How should pro-Israel activists counter this strategy when those espousing it have no interest in reasonable or balanced discussion?

Pessin: You've put your finger on a central point. The anti-Israel attack on the academy as a whole is reflected most clearly in (a) the personal attacks on pro-Israel individuals documented in the book and (b) the utter rejection of the pro-Israel voice via campus disruptions, the relentless calls to boycott, and the rejection of "normalization" (i.e. refusal to have any dialogue with pro-Israel voices). They couldn't be more explicit in their aims: the Israeli perspective, including the intimate connection between the Jewish perspective in general and the Israeli perspective, is simply not to be permitted on campus. They object to the "Palestine exception" while explicitly and actively advocating for and executing the "Israel exception" to free speech. The best response, I think, is to repeatedly and vocally point this out, and thus promote and defend our book's principal message: that whatever you may think about the conflict over there, the anti-Israel movement over here is profoundly antithetical to the academic and moral norms of the campus environment.

Q: Because on nearly every campus Jews and Israel supporters are severely outnumbered, their disadvantaged position arguably mirrors that of Israel's in global forums. Yet Israel -- thanks to its technology, security intelligence, and many other assets -- has managed to reduce the impact of international boycotts, lopsided UN votes, and other fora where attempts to punish or isolate Israel used to succeed far more. Is there any similar set of assets that Jews and Israel supporters on campus can leverage to start turning the tide in their favor?

Pessin: That's a great way of putting the question. It highlights what is simultaneously both an asset and a liability on campus: the many smart, talented, Jewish faculty and students on many campuses. The significant majority are generally supportive of Israel, but for many reasons they tend not to be vocal on campus, while the small minority who are Israel-haters tend to be very vocal. What's necessary is to give that majority the courage to stand up, speak up, and be heard—and denounce the anti-academic antisemitism that largely characterizes the anti-Israel movement. We hope our book will help in that regard, by letting potential advocates know they are not alone.

Anti-Zionism on Campus comes out April 1.