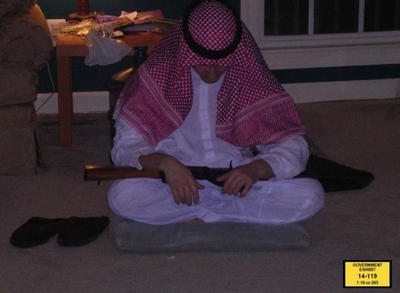 Nicholas Young could be imprisoned for up to 60 years if convicted of attempting to provide ISIS with material support and lying to federal agents.

The 36-year-old Muslim convert from Fairfax, Va., is the first U.S. police officer to face terrorism charges. Evidence and testimony in his five-day trial showed Young's unusual affinity for both Nazism and radical Islam.

Young gave Campbell a copy of Serpent's Walk, a 1991 novel published by the white supremacist National Alliance. Set nearly 100 years after World War II, it tells a story of SS officers who continued to fight for their cause until they were poised for global dominance. Agents also found a copy in Young's home.

A Nazi-Muslim alliance occurred during World War II, and prosecutors showed pictures of Jerusalem's Grand Mufti Amin al-Husseini's meetings with Adolf Hitler that were found in Young's house during his August 2016 arrest.

"This is an alliance based on the idea that the enemy of my enemy is my friend," testified prosecution expert witness Daveed Gartenstein-Ross.

Al-Husseini helped recruit the Bosnian SS division and was the author of Islam in Judaism, which "encouraged violence against Jewish people," Gartenstein-Ross said.

He explained for jurors the "areas of convergence between Nazism and Islamist militancy." Things that attract people to neo-Nazism and to militant Islam are similar, and "once you succumb to one of those ideologies, you become more prone to succumbing to the other ideology." Both totalitarian movements view the world in terms of "good" and "evil" and "share overlapping sets of enemies: the Jewish people and the West more broadly."

Long before Young met with the government informants, "he represented this alliance," Assistant U.S. Attorney John Gibbs said in his closing argument.

That's a key element of the case, since defense attorneys argue Young was entrapped and would not have tried to provide support to ISIS had the informants not been involved. 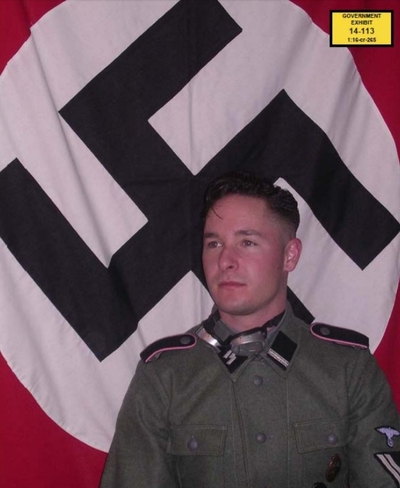 Material seized from Young's home and computer included photos of Young and his associates in Nazi SS uniforms in front of a Nazi flag, a framed photo of Adolf Hitler, a photo of Young's arm tattoo showing the official insignia of the 9th SS Panzer Division "Hohenstaufen," a picture of the swastika imposed on an Israeli flag with the caption "The Greatest Devil," and a cartoon depicting a pig with a giant hooked nose, titled "Jewish swine." A photo found on Young's phone showed billowing smokestacks with the caption, "Together we can finish what Hitler started."

Young's truck had the license plate "FRI-KRP," a reference to the Freikorps – volunteer German paramilitary groups that preceded Hitler's rise. A bumper sticker on the truck read: "Boycott the Terrorist State of Israel." His prayer list included fascist leaders Adolf Hitler, Benito Mussolini, Saddam Hussein, and Otto Skorzeny. He used an Israeli flag as a doormat in front of his house.

Songs on Young's iPod included "ISIS Techno Remix" and "Jihad Nasheed [chant]." "He would watch videos all the time" about "the guy talking about the Quran" and "stereotypical terrorist kind of videos" a former roommate, Fairfax County Police Officer Kenneth McNulty testified.

A 2006 photo shows Young dressed up in Islamic garb holding a gun. Investigators found electronic copies of The Book of Jihad and issues of al-Qaida's Inspire Magazine downloaded on the defendant's computer before he met with an informant who identified himself as Khalil Sullivan in December 2010. Websites bookmarked on Young's computer from 2009-2010 related to Jew-hatred, Neo-Nazis, Hitler, Osama bin Laden, Anwar al-Awlaki, and other radicals. Agents also found a CD of Awlaki's lecture series.

Young collected Nazi paraphernalia and militant Islamist material because he had an interest in European history, defense attorneys said. When he and his friends dressed up in Nazi uniforms and Islamic garb, it was mere "re-enactments" and "cosplay."

Other evidence showed Young used the encrypted instant messaging app Threema to send Google gift card codes worth $245 to "Mo," a man Young thought had traveled to Syria to join ISIS. ISIS would use the gift cards to communicate with and recruit more Westerners to join the group.

"Inshallah more cards will come your way. Many sting operations and set ups in the area." Young wrote.

Prosecutors described Young as "incredibly paranoid." He suggested Mo use "burner phones" and "frequently took the battery out of his cell phone" to circumvent surveillance by agents.

Prosecutors also showed images of Young and Mo visiting a FedEx Office store to set up email accounts to communicate with each other after Mo left to join ISIS in Syria. Young used what he believed was Hitler's birthday to set up his account Essakobayashi@mail.com.

Young traveled to Libya twice in 2011 and associated with rebels attempting to overthrow Muammar Qaddafi. Authorities discovered body armor, a Kevlar helmet, and several other military-style items in Young's baggage. In one email communication with Mo, Young mentioned serving with the "Abo Salem Suhada Brigade" in Libya, which is a reference to the Abu Salim Martyrs Brigade that has ties to al-Qaida.

Chesser was sentenced to 25 years in prison in 2011 for threatening the writers of the Comedy Central show "South Park" for including a character said to be Islam's prophet Mohammed dressed in a bear suit to mock radical Muslim reaction. Chesser also tried to support the Somali terrorist group al-Shabaab. Ahmed was sentenced the same year for plotting attacks on D.C.-area metro stations, and Khalifi pleaded guilty in 2012 to plotting a suicide bombing on the U.S. Capitol.

"Those were the circles Nick Young ran in," Gibbs told jurors. "Young spent a lot of time with them, knew them a lot better" than Khalil and Mo. In fact, it was Young who showed ISIS propaganda videos to Mo, he added.

Khalil Sullivan testified he met Young at a 2010 wedding party, where investigators wanted him to meet with another man under investigation named Saleh Al-Barmawi. Al-Barmawi called for "jihad against Israelis" and said "Israel and America were his enemies," Sullivan said.

"Mo" also testified that he, Young, and two others would watch "ISIS-propaganda recruiting videos and talk about jihad." "Go join them," one of the men, Hicham Hall, told the others. "And that, and talk about being away from...from civilization in a place where you can practice real Islam, you can walk the Hajj, you can have four wives, you can build yourself a masjid, you can fight jihad, you can do it all." Hall called former Taliban leader Abdullah Mehsud, the "Lion of Khorasan."

Another of Young's former roommates, Brian Michael Menzies, remembered speaking with Al-Barmawi at Young's house and at events sponsored by the Muslim Students Association (MSA). "Nick and Saleh were friends, hung out a lot together," Menzies said. 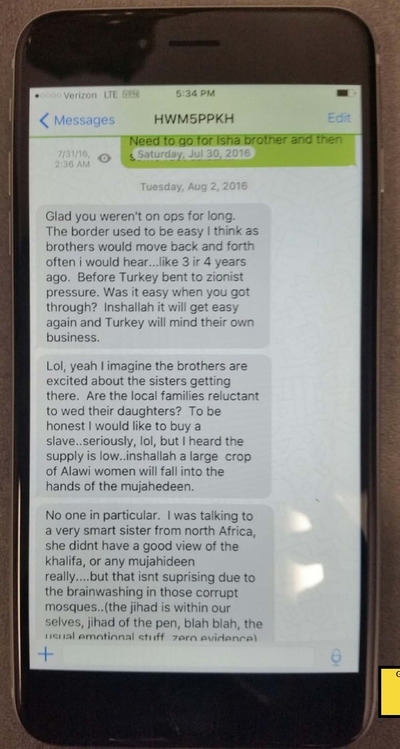 Young also told "Mo" about his desire to obtain a slave: "To be honest, I would like to buy a slave.. seriously, lol, but I hear the supply is low. inshallah a large crop of Alawi women will fall into the hands of the mujahideen." He called local mosques corrupt because they preached that "the jihad is within ourselves, jihad of the pen, blah blah blah, the usual emotional stuff, zero evidence."

That attitude is proof of Young's inherent desire to support ISIS, prosecutors argued. "You can measure someone's predisposition even from the way they act now. A police officer in Washington, D.C., says I want a slave," said Assistant U.S. Attorney Gordon Kromberg.

Young also watched "ISIS propaganda videos during his lunch break at work while serving as a police officer," Gibbs said.

"He believed in the caliphate and thought it was a good thing for that part of the world."